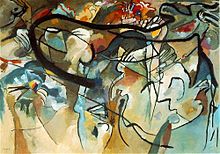 Abstract painting (from the Latin abstrahere : peel off, separate) or absolute painting (see → Abstract Art ) is a collective term for various currents of non-object-related painting styles of Classical Modernism .

Abstract painting means arranging or composing with colors, contrasts, lines and geometric shapes without deliberately depicting objects or the gestural application of colors on canvas ( action painting , Informel ) - without the intention of composing .

In abstract painting, there was a break with one of the basic principles of historically grown occidental painting. Up until the beginning of the 20th century, the reference to actually existing objects was a universal and style-independent point of reference for artistic creation. 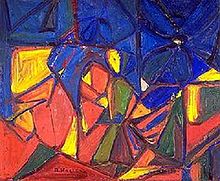 The term abstract painting is understood to mean the tendency to avoid any reference to objectivity and to limit what is painted to the sounds of shapes and colors and their inner-pictorial relationships and opposites.

In the first half of the 20th century, the term abstraction in relation to the visual arts was constantly expanded. Finally, abstract painting could designate any form of simplifying representation that reduces the impressions of nature.

The beginnings of abstract painting around 1910 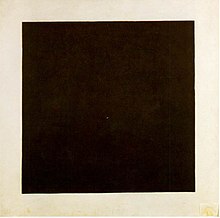 The art review regards the path to pure abstraction as a necessary development within general tendencies of classical modernism . Abstract painting is seen as a consequence of Neo-Impressionism , Fauvism , Expressionism and Cubism .

Purely abstract painting began in the period after 1910. Wassily Kandinsky , František Kupka , Piet Mondrian and Robert Delaunay are among the main founders . One of the most radical and controversial works of abstract painting is the famous Black Square by Kazimir Malevich , which was first exhibited in 1915. 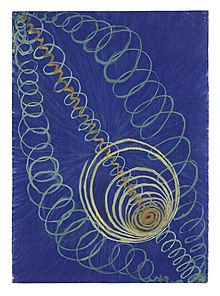 However, who created the first abstract work is controversial. It is now doubted that it was Kandinsky who was the first to create a completely abstract watercolor without a title in 1910. It is believed that it is pre-dated and may have served as a study for Composition VII from 1913. According to the latest findings, the Swedish painter Hilma af Klint , who was inspired by occultism , spiritualism and theosophy, painted the first abstract picture as early as 1906. However, her recently discovered work remained completely unknown in its time and therefore had no influence on the development of abstract painting. František Kupka was the first to exhibit completely abstract pictures in the Paris Salon d'Automne in 1912, which caused an enormous sensation. In the early days of abstract painting there was no particular group of artists who were solely dedicated to this new direction in painting. The painters who did not work objectively belonged to different, more or less independent currents.

The new painterly point of view spread rapidly in Europe after 1910. In 1913 one can already speak of a “fashion”. Today abstract painting is an integral part of modern art.

The simultaneous emergence of Arnold Schönberg's atonal music is seen as significant in the context .

Abstraction in painting before 1910 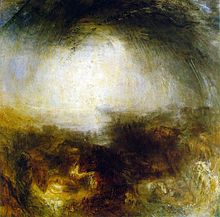 As early as the 19th century , paintings and graphics were created without any directly recognizable reference to the subject. Hundreds of such pictures can be found, for example, in the work of the English painter William Turner , the French poet and draftsman Victor Hugo and the French symbolist Gustave Moreau . On the discursive level, the idea of ​​abstract painting first became tangible in the early romantic period. A generation later, Gottfried Keller , who trained as a painter in his youth, describes in his autobiographical novel The Green Heinrich how the protagonist creates an abstract drawing, whereupon his painter friend Erikson - albeit ironically - the age of non-representational art, connected with the utopia of an egalitarian society, proclaims. The study of the effects of lines and colors in the sense of abstract formal principles of representation was practiced almost exclusively in the studio before 1900. Many traditional works were based on abstract preliminary studies and sketches. In this sense, "the achievement of the avant-garde around 1912 did not lie in the invention of abstraction", "but in the fact that it was declared a work of art."

The main representatives of the first movements of Classical Modernism , Fauvism and Cubism , Henri Matisse and Pablo Picasso , did not take the last step towards complete abstraction. They took the position that in this way the abstraction was only imitated. It was not until 1910 that the first major wave of purely abstract painting artists emerged. Strict abstract directions such as constructivism or suprematism developed .

After its creation, abstract painting quickly fell into a number of styles. Its cross-style division into an expressive abstraction (Kandinsky) and a geometric abstraction ( Malewitsch , Theo van Doesburg , Piet Mondrian ) or a lyrical and a constructive-geometric direction has essentially external features in mind, less methodological differences. Abstract principles were even used in surrealism (see automatism ). The best-known representative of what was later called abstract expressionism or action painting was the American Jackson Pollock ; However, other painters were pioneering here, such as the French surrealist André Masson . 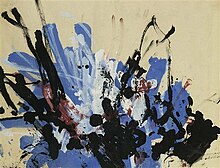 A picture of Congo

The chimpanzee Congo, born in 1954, painted "abstract" pictures, some of which were presented in an art exhibition in London. The pictures have been declared high-ranking works of abstract art by art connoisseurs. After the artist was announced, there were heated discussions about the art worthiness of such works.

From the beginning, abstract painting was greeted with enthusiastic reception and defense as well as polemical and serious criticism. Even important artists and art historians were critical or even hostile to it.

Abstract painting found it difficult to be accepted and accepted by the public, but also by art critics. Due to its deviation from the established concept of art and its renunciation of representational depiction, it met with displeasure from the general public. It was stated that it was not about art and that neither artistic talent nor manual skills were necessary to create it. The above examples of painting chimpanzees have often been cited in a polemical way by critics of abstract painting.

The criticism that abstract painting, especially Abstract Expressionism , was functionalized during the Cold War goes in a different direction . Thereafter, the CIA subsidized Jackson Pollock and other Abstract Expressionists through the Congress for Cultural Freedom and in accordance with the funding policies of the Rockefeller Foundation and the Ford Foundation . While Stalin pushed for " socialist realism " in his immediate sphere of influence , abstract painting was the obvious choice after the war in destroyed Europe as a demonstration of political and artistic progressiveness and freedom (without a socially critical message).