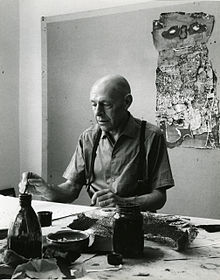 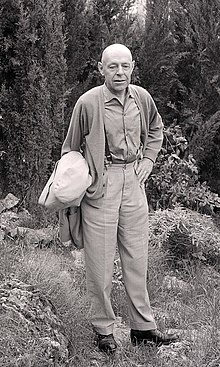 Jean Philippe Arthur Dubuffet (born July 31, 1901 in Le Havre ; † May 12, 1985 in Paris ) was a French painter , sculptor , collage and action artist and is one of the most prominent representatives of French post-war art. Dubuffet was also an influential art writer; that's how he coined the term Art brut .

Jean Dubuffet was born in Le Havre, the son of an upper-class family of wine wholesalers. As a student he took evening courses in drawing at the École des Beaux-Arts in Le Havre in 1916 ; After graduating from high school in 1918, he went to Paris to study literature, language and music at the Académie Julian . It was here that he met Max Jacob in 1919 . In the twenties he painted representational compositions in the circle of the Paris Surrealists , but soon gave up art. After a long creative break in which he worked as a wine merchant, he started again with naive paintings in 1942; his first solo exhibition took place in 1944 at the René Drouin gallery in Paris . In the early post-war period he caused a scandal with his "primitive" material pictures, but soon gained international fame, especially in the USA. There he exhibited in the Pierre Matisse Gallery in New York as early as 1947.

Dubuffet developed the concept of anti-intellectual art, which he called Art brut . He also defended this in terms of art theory in texts and lectures. In 1949 he published his manifesto L'Art brut préféré aux arts culturels . His early paintings are inspired by the visual vocabulary of children, naive and mentally ill children, who for him are the artists of Art brut. Inspired by the graffiti photographs by Brassaï , Dubuffet dealt with the subject of the wall and the graffiti carved into it. The "physical-material manufacturing process" of the wall and the graffiti was important to him. That is why he tried to recreate the creation process of the wall on canvas by applying many thick layers of paint and giving them time to react. He even reproduced graffiti technically as scratches in the oil paint on the canvas, with which he combined trivial and high art, resulting in a positive re-evaluation of graffiti, which has many parallels with Art brut.

At the same time, he experimented intensively with printmaking : woodcut ( Ler dla campane , 1948) and lithography ( Les murs , 1945). He first worked on the lithographs in the Fernand Mourlot workshop in Paris ( Matière et mémoire , 1945), and set up his own studio in 1958; His extensive cycle Les Phénomènes (1958/1959) is outstanding . After 1962, Dubuffet developed his Hourloupe series , cell-like structures that are limited to the colors red, white, black and blue. At the end of the 1960s, he transferred the graphic elements of the Hourloupe series to sculpture . Painted rock-like structures made of polyester , large-format open-air sculptures and partly accessible labyrinths such as Jardin d'Email (1972/1973) in the Kröller-Müller Museum in Otterlo in the Netherlands were created . In 1959, Jean Dubuffet took part in documenta 2 . He also took part in documenta 3 (1964) and the 4th documenta (1968) in Kassel .

With Coucou Bazar , Dubuffet created a total work of art of painting, sculpture, theater, dance and music in 1972. Several costumed figures interact with each other as well as with the stage elements. This spectacle was only produced three times: 1973 in New York and Paris and 1978 in Turin. The last production was recorded in a film. However , for conservation reasons, Coucou Bazar can no longer be listed as a whole. Two costume figures can still be moved and were shown in the Fondation Beyeler exhibition in 2016.

In 1984 he created a series of works on a black background and in the last year of his life he wrote an autobiography.

After his death in 1985, his musical experiments - with Asger Jorn - became known, as did his literary work. He maintained regular correspondence with numerous authors, including Claude Simon , Jean Paulhan , Witold Gombrowicz and Valère Novarina . Since 1954 he has been a member of the Collège de 'Pataphysique .

His works are represented in numerous international museums; During his lifetime, Dubuffet donated large complexes of works to the Musée des Arts décoratifs in Paris and the Stedelijk Museum in Amsterdam . His estate is managed by the Dubuffet Foundation in Paris, where you can visit his former studio at 137, rue de Sèvres, and in the Foundation's second headquarters in Périgny-sur-Yerres . a. Dubuffet's large walk-in sculpture Closerie Falbala (1,610 m²) can be viewed.

In addition to his art, Dubuffet was influential because of his commitment to Art brut : the creations of the mentally ill, social outsiders and eccentrics, which he collected and promoted. Against the background of this interest, he also visited Hans Prinzhorn's extensive collection of images of mentally ill people in Heidelberg. Dubuffer's Art Brut collection is now kept in the Collection de l'Art Brut in Lausanne .