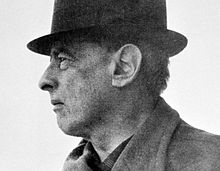 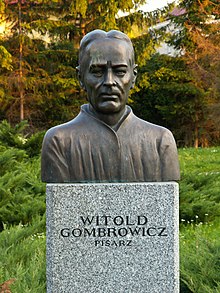 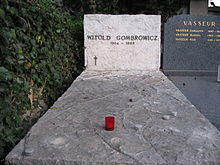 Witold Gombrowicz came from the small Polish landed nobility and was the youngest of four siblings. From 1911 on he grew up in Warsaw . In 1927, he completed his law studies at the University of Warsaw from. In July 1939, shortly before the start of the Second World War , he went on a boat trip to Buenos Aires in Argentina on board the MS "Chrobry" - the then newest Polish trans-Atlantic liner (11,442 GRT). Because of the outbreak of war, he did not return to Poland and stayed in Buenos Aires. He lived from work as an employee of the Polish bank Banco Polaco ; however, he considered writing to be his real life's work. In 1963 he returned to Europe (on board the Italian 21,000-ton turbine steamer FEDERICO C), but not to the People's Republic of Poland , but to Cannes in France. Thanks to a grant from the Ford Foundation , Gombrowicz went to West Berlin as artist in residence for a year in 1963 , at the same time as Ingeborg Bachmann . He then settled in Vence in the south of France and married Rita Labrosse in 1968 . In 1969 Witold Gombrowicz died of complications from asthma . His grave is in Vence.

Gombrowicz's early work, the volume of short stories Pamiętnik z okresu dojrzewania (German: Memoirs from the Age of Tire ) from 1933, was completely misunderstood by Polish critics. One of the motifs of the novel Ferdydurke , published in 1938, is therefore the accounting for the ignorance of the critics, the “intellectual aunts” or “cultural aunts”, as Gombrowicz calls them, who accompanied the writer throughout his life. Since then, Gombrowicz has endeavored to enlighten readers and critics of his intentions. Gombrowicz provided each of the three editions of Trans-Atlantyk published during the author 's lifetime (1951 (excerpts) and 1953 in Paris , 1957 in Poland) with a new foreword. In order to gain an understanding of himself and his work, he began to write his diary ( Dziennik ) in 1953 , which appeared regularly in the Paris magazine Kultura . Years later it was described by literary scholars as his most important work. In the 1960s, two more novels were written, Pornografia (1960) (different German editions: Verführung und Pornographie ) and Kosmos (1965) (different German editions: Indizien und Kosmos ). By this time at the latest, Gombrowicz's literary importance was also recognized internationally.

In 1953, in the People's Republic of Poland, Gombrowicz was denounced by Deputy Prime Minister Józef Cyrankiewicz for having taken up the arguments of German chauvinists with zeal.

Gombrowicz grants his characters, as well as himself, the right to individuality and intellectual freedom, regardless of any convention. He entitles every individual to lifelong “immaturity”, which for him symbolizes the defense against the “mature” forms of life (prevailing ideologies, religions, nationalisms, social norms) and art (literary and artistic conventions). With this program, Gombrowicz addresses topics that Jean-Paul Sartre summarized a short time later in the term existentialism .

Although Gombrowicz lived in emigration from his departure in 1939 until his death , he tirelessly grappled with the problems of his home country. As a Pole, he was of the opinion that the Polish tradition of all things stood in the way of the intellectual development of his home country. With his rejection of Poland's heavy romantic legacy, he called on his compatriots to free themselves from old Polishism through individual and not just collective actions. Critics saw this motif as an attack on Polish tradition and was one of the reasons for Gombrowicz's long-term publication ban in Poland.

In 2013, his widow Rita announced that he had secretly kept another diary under the title Kronos , in which, among other things , he had precisely recorded his sex life .

As a novelist, Gombrowicz continues the tradition of the comic novel (in the sense of François Rabelais , Miguel de Cervantes and Henry Fieldings ). The existential problems he deals with therefore appear irrelevant and funny, which is often misunderstood. In this way, Gombrowicz abolishes the, in his opinion, powerless art of modernism and especially of the novel, which he considers sterile, snobbish and dishonest towards reality.

The form and the "unform"

Gombrowicz not only breaks with conventions and rigid forms in his works in terms of content, but also transfers it to the form and language of the work. He experiments with historically proven literary genres, mixes them up and translates them into his personal language. The resulting form is an “unform”, his novels become “ anti- novels ”.