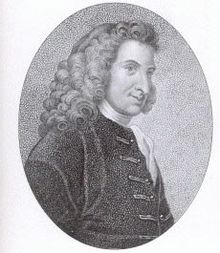 Henry Fielding (born April 22, 1707 in Sharpham Park near Glastonbury , Somerset , † October 8, 1754 in Lisbon ) was a famous English novelist, satirist, playwright, journalist and lawyer during the Enlightenment .

Henry Fielding came from the Earls of Denbigh family . William Fielding, 1st Earl of Denbigh was its direct ancestor. Henry's father was Colonel Edmund Fielding, who had fought with distinction under Marlborough . His mother, Sarah Gould, was the daughter of Sir Henry Gould, a lawyer from whom she had inherited an estate in East Stour, Dorset . The family moved there when Henry was three years old. Fielding's mother died before his eleventh birthday and his father remarried.

Henry Fielding, in contrast to his sisters, who also included the future writer Sarah Fielding , attended Eton College and studied law in London and at Leiden University . From 1729 to 1737 he worked in London as a playwright and theater director. Of his 25 written dramas, the farce The Life and Death of Tom Thumb the Great (1730) was very successful at the time. The satires Pasquin ( 1736 ) and The Historical Register for 1736 (1737) also appeared.

As a novelist, Fielding first appeared in 1741 with Shamela , a parody of Samuel Richardson's " Pamela ". With The History of the Adventures of Joseph Andrews and of His Friend Mr. Abraham Adams (1742, German 1765), another parody of the bestseller of his rival Richardson, Fielding founded the humorous and realistic novel: His program of combining comedy and realism and drawing a narrative picture of society with these means was of the greatest importance in literary history. This gave the genre of the novel a completely new, decisive impulse. 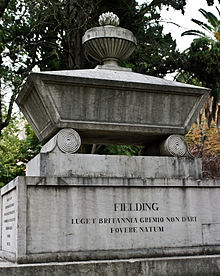 Fielding's Miscellanies (3 volumes, 1743) contain The History of the Life of the Late Mr. Jonathan Wild the Great , a satirical novel about heroism. Fielding used the criminal Jonathan Wild to caricature the Whig politician and British Prime Minister Robert Walpole . His most famous novel, The History of Tom Jones, a Foundling (6 volumes, 1749, German 1771) describes the adventures and misfortunes of the mischievous hero Tom Jones and unfolds a rich picture of English life and customs. In Amelia ( 1751 ) Fielding included social issues, especially the criticism of the English judicial and penal system in view of his experiences as a justice of the peace, in the novel.

At times Fielding was also active as a journalist, as evidenced by the magazines The True Patriot (1745), The Jacobite's Journal (1747) and The Covent Garden Journal (1752). From 1748 he was justice of the peace, first in Manchester and from 1749 in Middlesex . In this function he fought against the social grievances in England and tried to curb the increasing crime in London with the help of reforms in the legal and police systems. The writings An Inquiry into the Causes of the Late Increase of Robbers, etc. (1751) and Proposal for Making Effective Provision for the Poor (1753) were published. After his death, his half brother John continued the reforms.

Fielding died of liver failure in Lisbon on October 8, 1754 . Posthumously published his Journal of a Voyage to Lisbon (1755).

The character of Captain Booth from The History of Tom Jones, a Foundling found a form only a little later in the servant tragedy The Gamester (1753) by Edward Moore , whose main character, the gambling addict Beverley the gambler , unmistakably bears his features.