Sarah Fielding (born November 8, 1710 in East Stour , Dorset , † April 9, 1768 in Bath ) was an English writer whose fundamental importance is that she has developed new formal and experimental structures of the novel. In addition, by representing moral principles in her works, she was able to generally facilitate the social acceptance of women writers in England in the 18th century. Sooner than most gifted sister of the currently known novelist Henry Fielding seen it approved it at least as an author of The Governess, or The Little Female Academy ( 1749 ), the first specifically aimed at children book to have written. Five years earlier she had great economic success with her novel The Adventures of David Simple (1744).

Sarah Fielding was born in 1710 as the second eldest daughter of Colonel Edmund Feilding, who fought with honors under Marlborough , the youngest grandson of the 3rd Earl of Denbigh , and his wife Sarah Gould. The father spelled his last name on documents as both Feilding and Fielding, but his famous children always spelled it as Fielding. Sarah's mother was the daughter of Sir Henry Gould, a judge of the king.

Emund Feilding left his mother-in-law, Sarah Davidge Gould, to raise his children at Glastonbury while he tried to advance his career in London. They also grew up at their paternal grandfather's house in East Stour . John Feilding was a Cambridge University- trained, three-fiefdom Anglican priest who had been considered for an episcopal office in Ireland . The eldest son Henry was sent to Eton for training, while the girls were all sent to Mary Rookes's boarding school in Salisbury . Sarah Fielding always found this comparatively rudimentary education, which was common to many young women of the impoverished English landed gentry , as a shortcoming and later tried to make up for it.

When Sarah's mother died in 1718, Edmund married Anne Rapha, a Catholic widow who also brought various children into the marriage and who would later give birth to Sarah's half-brother, the future reformer John Fielding . Sarah Davidge Gould and Sir Henry Gould secretly blamed Edmund for their daughter's death and were extremely upset about Edmund's choice of his second wife. Anne Rapha was then the target of anti-Catholic resentment, especially among older family members. Lady Gould was so upset by Anne Ropha and the enlargement of the family that in 1721 she successfully sought custody (England) of her grandchildren and the ownership of the family home in East Stour. This separated the children from their father for years.

Second edition of The Adventures of David Simple , for which Henry Fielding penned a foreword

In the early 1740s Sarah Fielding moved to London , where temporarily lived with her sisters or with her brother Henry and his family. The women in the family lacked significant financial resources for a dowry , so none of them could marry. Even when Lady Gould died in 1733, there had been too little money left for the children. In addition, the father of the family had further decimated the wealth through his extravagance.

Sarah chose to make a living writing. While living with her brother and serving as his brother's housekeeper, she began writing. In 1742 Henry Fielding published Joseph Andrews , in which many literary scholars suspect that Sarah was the author of Leonora's letter to Horatio in this work. A year later her brother wrote his miscellanies with biographical sketches. Here too, the biography of Anne Boleyn Sarah Fielding is presumed to be authorship.

After these two finger exercises, Sarah Fielding published the novel The Adventures of David Simple anonymously in 1744 , as was the custom at the time. Nevertheless, due to her already existing level of awareness at the time, she could easily be identified as an author. The novel was quite successful and received high praise from contemporary critics, most notably the publisher and writer Samuel Richardson . Richardson, who himself was often the target of the derisive satires of his competitor Henry Fielding, testified that both Henry and Sarah had identical literary potential. The Adventures of David Simple got a second edition after ten weeks and was translated into German ( Die Bendeheiten David Simpel: or story of his travels through the cities of London and Westmünster to look for a true friend. Hertel, Hamburg 1746) and French .

The following works by Sarah Fielding then had on their envelope the advertising words that they were written by the author of David Simple . An equally common practice that can be traced back to all female authors into the 19th century. The novel was so popular that in 1747 she wrote a veritable epistolary novel in which she collected alleged letters between the main characters in the work, Familiar Letters between the Principal Characters in David Simple , and finally added a sequel in 1753 entitled David Simple: Volume the last .

The Adventures of David Simple was one of the first sentimental emotional novels that describes a hero who is on a journey of experience who is looking for real friendship and who ultimately triumphs thanks to his kindhearted manner and moral strength. He finds happiness in marriage and in a rural, humble life away from the failings of the big cities. David Simple is partly an analog character development as a literary figure of the Heart Free in Henry Fielding's The Life and Death of Jonathan Wild, the Great and Squire Allworthy in his The History of Tom Jones, a Foundling . Nonetheless, David Simple shares a number of character traits with other sentimental literary figures of the epoch, who only find their own peace by fleeing the failures of predominantly urban civilization in the harmony of a mostly rural utopia . In the sequel, David Simple: Volume the Last , however, both Sarah Fielding's description and Simple's visions grow darker: he seems far less fortunate to find fulfillment in the corrupt, amoral world. 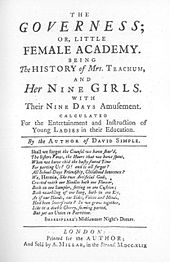 Cover of The Governess, or The Little Female Academy (1749), by Sarah Fielding, the first children's novel

Fielding also wrote three other novels with independent stories. The long considered the most famous was The Governess, or The Little Female Academy ( 1749 ), the first specifically aimed at children book . She also published The History of the Countess of Dellwyn (1759) and The History of Opelia (1760).

As a literary critic, Sarah Fielding wrote Remarks on Clarissa in 1749 on the novel Clarissa by Samuel Richardson. The History of Charlotte Summers ( 1750 ) was also attributed to Sarah Fielding. The work The Lives of Cleopatra and Octavia was written as a double biography in 1757 on the basis of Greek and Roman sources, which describe the lives of both historical personalities, i.e. Cleopatra and Octavia . She was particularly proud of the only work of hers that was published under her name in 1762 during her lifetime; a translation by Xenophon on the philosopher Socrates , Xenophon's Memoirs of Socrates, with the Defense of Socrates Before His Judges .

Sarah's sisters died between 1750 and 1751, her brother Henry three years later while on vacation in Lisbon . So she turned her back on London and moved into a small house in Walcot just outside the city limits of Bath . The well-known philanthropist Ralph Allen and the equally famous and friend of Fielding Elizabeth Montagu , a member of the Blue Stockings , supported Fielding with funds. Around 1767, Sarah Scott, the sister of Elizabeth Montagu, invited Sarah Fielding to live with her and other women in a purely utopian women's commune.

This attempt, which had been described in the utopia Millenium Hall , however, came to an end shortly before the death of Sarah Fielding at the age of 57 on April 9, 1768. A commemorative plaque on the western portal of Bath Abbey commemorates the English writer.

“Their combination of morality and didactics in their novels runs counter to today's aesthetic ideas; but in the 1740s her works were milestones in the history of the English novel because they established a new, moral form of female fiction. In doing so, F. made a significant contribution to ridding the reputation of women writers of the aura of wickedness that had surrounded earlier authors such as Aphra Behn and Mary Dealrivier Manley . "

Sarah Fielding's works are still worth reading today because they were formally experimental. Her fictionalization of the life of historical personalities was progressive, in The Lives of Cleopatra and Octavia (1757) she visualized the importance of the different role types of the femme fatale compared to the submissive wife ; from the narrative perspective, Fielding also chose an original to morbid path, as both women speak out of the grave.

The subject The Cry (1754), which moved between novel and drama together with Jane Collier, broke through the conventions of the genre and reflected the unbiased view of the life of a “fallen woman” at the time.

Despite the appreciation of her contemporaries, who easily identified her as an author, she was soon forgotten. This is how the authorship of the German translation of her last, more conventional novel, The History of Ophelia (1760) was written; The Robbed Hermit, or Ophelia (1767) to her brother Henry Fielding. “And the highest praise critics until recently gave her was that she wrote something like her brother. However, this misjudges the achievements of this author, who dared formal experiments, set the course for the positive image of women writers and spoke out in favor of a better upbringing and greater moral independence for women. "