The title of this article is ambiguous. Further meanings are listed under Xenophon (disambiguation) . 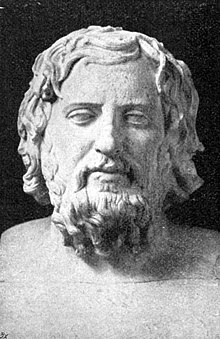 Socrates (right) and possibly Xenophon (left). Detail from the School of Athens by Raphael , 1510–1511

Xenophon ( ancient Greek Ξενοφῶν Xenophṓn ; * between 430 and 425 BC in Athens ; † approx. 354 BC in Corinth ) was an ancient Greek politician , general and writer in the fields of history , economics and philosophy . He was a student of Socrates .

What we know today about Xenophon's life is essentially taken from his own works and a third-century book on the history of philosophy.

Xenophon, son of Gryllos, was an Athenian from the Demos Erchia. He came from a wealthy family, presumably from the "knight class", which was more oligarchical in mind. At a young age (between 410 and 401 BC) he became a supporter of the Athenian philosopher Socrates , who, according to an anecdote, blocked his path in a narrow alley and asked him where to buy various foods. After the young Xenophon had answered, Socrates asked him: “And where do people become noble and capable?” Xenophon was startled and is said to have followed Socrates ever since. Even if the acquaintance with Socrates could not have lasted long (Xenophon left Athens in 401 BC, Socrates died in his absence in 399 BC), Xenophon stuck to Socrates and wrote dialogues a long time later in which Socrates was the main actor Has conversations with others.

In 402 BC The Greek Proxenus of Thebes was commissioned by the Persian Prince Cyrus to recruit Greek mercenaries for a campaign, whereupon he invited Xenophon, along with others, to the army camp in Sardis . Xenophon reports that he was undecided, since Athens was certainly not welcomed for Athenians to enter the service of the Persians, especially since Cyrus had sided with the enemy Sparta in the Peloponnesian War . He therefore decided to travel to Delphi and consult the oracle there. Xenophon said that he himself asked the question in such a way that the answer he received was not whether he should travel, but only which gods he should turn to in order to survive the journey safely. So he traveled in 401 BC. In the Achaemenid Empire .

Xenophon accompanied the Greek part of the so-called "train of 10,000" initially as a civilian without a military function. The leader Cyrus fell in 401 BC. In the battle of Kunaxa . The army disbanded and the Greek mercenaries had to try to make their way to the sea on their own. When their leader, Proxenus von Thebes, also fell, Xenophon, whose voice had already gained more and more weight, was elected as the new commander, but said he declined the function. Xenophon came with the army to the Black Sea and finally Byzantium by Pergamon .

In the following years Xenophon, undesirable in Athens, joined the Spartans and their army led by Agesilaus . They then gave him an estate in Skillus , to which he retired with his wife Philesia and two sons in the 380s. There he took care of the economy and devoted himself to spiritual activities. During this time the historical works Anabasis and Hellenika were created , as well as an economic writing and philosophical dialogues. 371 BC BC Skillus fell, however, and Xenophon's family moved to Corinth . In 367/366 Athens' exile judgment on Xenophon was lifted, whereupon, as one can only assume, he returned to Athens after 35 years, but then, according to Diogenes Laertios, died in Corinth.

We don't know much about relationships with other Socratic students - but he is said to have had a bad relationship with Plato and Aristippus of Cyrene . Diogenes Laertios attributes it to a rivalry between the two philosophers that both Xenophon and Plato wrote a banquet and a speech in defense of Socrates . Furthermore, one wrote moral treatises, the other his memorabilia , and Plato dismissed the education of Cyrus (there is a work by Xenophon on it) as fiction. Some researchers find numerous reminiscences of Plato's dialogues in Xenophon's memorabilia .

Xenophon's works, especially the Socratic writings and the Anabasis , were popular because of their sober, clear language (he was read and praised by Marcus Tullius Cicero , among others ); he remains an important style model for Attic Greek to this day. Since Xenophon was partially eyewitness to the reported events, he is also an important source for the Greek history of the 4th century BC. And has recently aroused the interest of research. It is also of importance for the history of philosophy as a critical complement to the representation of Socrates in the works of Plato . His works Hipparchikos and Über die Reitkunst are now widely seen as the basis of hippology . The information to be found there is still valid today.

Xenophon also thought about the economy , which he recorded mainly in two books: Oikonomikos (conversation about housekeeping) and De Vectigalibus (ways and means of raising money for the state). In these he deals with the principles of good housekeeping on the one hand and the Athens economy on the other. Tomáš Sedláček sees these works as the very first stand-alone textbooks on micro- and macroeconomics.

In addition, Xenophon dealt with subjective value theory and the assignment of work in the polis .

Four replicas of a non-preserved original portrait have been preserved. One of these replicas, a Herme discovered in Cairo in 1940 , is now in the museum in Alexandria. The origin of the original can be traced back to the years 335 to 330 BC. Estimated when Xenophon had already died.

Charles Soillot hands over his French translation of Xenophon's Hieron to Duke Charles the Bold of Burgundy. Illumination in the dedication copy made around 1460 for the Duke (Brussels, Bibliothèque royale, Ms. IV 1264, fol. 1r)

As in the case of Plato , it is assumed that all of Xenophon 's writings have survived. As with Plato, it is also assumed that not all of the writings handed down under his name actually come from Xenophon. This includes the state constitution of the Athenians and probably also the treatise on hunting . Über Theognis and the Xenophon letters are certainly inauthentic . The following classification of Xenophon's 15 writings follows that of Klaus Döring :

About Xenophon in general