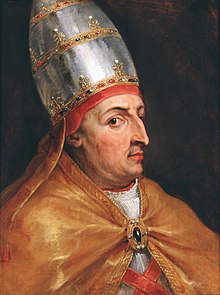 Nicholas V, son of a doctor, was the first commoner on the papal throne since Celestine V and also the first humanist among the popes. (Therefore he could not fall back on a family coat of arms for the Pope's coat of arms.) Before his pontificate he was Vice Chamberlain from 1443 , Archbishop of Bologna from 1444 and Cardinal of the titular church of Santa Susanna from 1446 . After only two days of conclave of 18 cardinals, he was elected Pope on March 6, 1447 in the Santa Maria sopra Minerva in Rome and enthroned on March 19.

An initial success was the final overcoming of the schism through the resignation of the antipope Felix V (1449) appointed by the Basel Council . The great success of the Holy Year 1450 and the imperial coronation of Friedrich III. in 1452 testify to the increased international prestige of the papacy. At the same time, Nicholas V stands for the end of the conciliar movement , whose ideas he rejected as did his predecessors and successors. The autocratic official opinion of the Pope with the Government of the Papal States met in Rome on resistance, which culminated in a failed uprising 1,453th Added to this was the conquest of Constantinople by the Ottomans in the same year, which drastically showed the papacy that the unification of the European princes against the Ottoman Empire had failed.

With the Bull Romanus Pontifex (January 8, 1455), Pope Nicholas V transferred the administration of the lands to the Portuguese King Alfons V , whose uncle Henry the Navigator and the Portuguese Order of the Knights of Christ , headed by Henry as secular administrator, and their successors , Ports, islands and seas of Africa - more precisely: the property rights for the areas from Cape Bojador to the southern tip of Africa, although the extent of the areas was still unknown. Associated with this was the patronage over the churches, the trade monopoly (except for the trade in war material), the exclusive right of navigation in these waters and the right to lead non-Christians into slavery .

In the holy year 1450 he used to show the pilgrims the heads of Peter and Paul in the Lateran basilica every Saturday and the handkerchief of the Veronica in St. Peter every Sunday and he led the giving of the Apostolic Blessing in the (old) St. Peter's Square on Sundays - and public holidays, as is still common today. Pope Nicholas V died on March 24, 1455; he was buried in the outer south aisle of the old Constantinian basilica, the predecessor of St. Peter's Basilica , in Rome.

As a builder, patron of the arts and promoter of the humanist movement, Nikolaus V achieved extraordinary things. He is considered to be the first pope with a humanist education and was the founder of the Vatican Library . In his biography of the Pope, completed in 1455, the humanist Giannozzo Manetti handed down an address to the cardinals on their deathbed, in which the reasons for this energetic promotion of the sciences and the arts were explained. The authority of the Roman Church can only be fully known through the study of its origin and growth, that is, through spiritual effort. For the weak faith of the uneducated majority, however, it is also necessary to set outward signs of ecclesiastical authority through display of splendor and demonstration of strength.

In his biography of Nicholas V, Manetti describes an extensive program for the renewal of Rome: restoration of all 40 station churches , radical redesign of the Vatican and its surroundings and expansion of the fortifications. Without a doubt, Nicholas V did not succeed in fully implementing this comprehensive project in his short pontificate. But it far surpassed its predecessor as a client. So he built a large new wing of the papal palace at the Vatican and began to expand the early Christian basilica, the old Constantinian St. Peter's Church . Nicholas V not only took care of the churches and palaces of Rome, but also the expansion of roads, bridges, water pipes, fountains and defenses. Among the painters, Nicholas V particularly valued Fra Angelico , whom he continued to employ without interruption after the death of his predecessor, Pope Eugen IV. The painter created the famous frescoes of the Cappella Niccolina in the Vatican Palace for Nicholas V.