In the Bull Romanus Pontifex of January 8th, Pope Nicholas V grants King Alfonso V of Portugal and the Infante Henry the Navigator and their descendants all of Africa , sole navigation law there, the trade monopoly and the right to lead infidels into slavery . King Alfonso V leaves on October 5 in the Cathedral of Lisbon read the representatives of all foreign trade groups the bull solemnly. 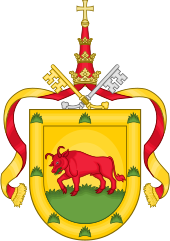 Kalixt III coat of arms from the Ingeram Codex , around 1459

After the death of Pope Nicholas V on March 24th in Rome, in the conclave , which begins on April 4th of the year (and in which 15 cardinals participate - there will never be so few), the factions of the Colonna and the Opposite Orsini . But neither side is able to enforce their favorites. Cardinal Bessarion , who was initially introduced as a compromise candidate, fails, and this is the hour of the now 77-year-old Catalan Alonso de Borja . Old and of an impeccable reputation, plus an accomplished lawyer, the Cardinal of Valencia does not seem to pose a serious threat to the prevailing interests. On April 8th he is elected Pope and takes the name Calixt III. on. One of his first acts is the canonization of the Dominican Father Vinzenz Ferrer , who predicted the Pope for him around 1410.