Defeat of the Frankfurters in the battle of Kronberg 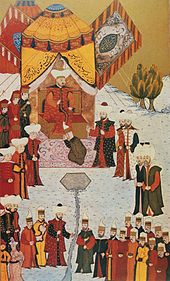 Bayezid is elevated to sultan - miniature from the 15th century