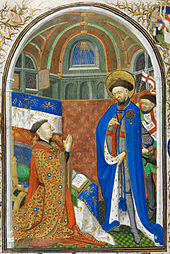 John of Lancaster (left) in a 15th century depiction 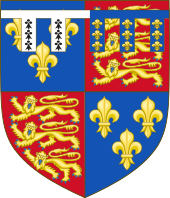 John of Lancaster Coat of Arms

John of Lancaster, 1st Duke of Bedford KG (born June 20, 1389 , † September 14, 1435 in Rouen ) was the third surviving son of King Henry IV of England and Mary de Bohun . His eldest brother was King Henry V of the House of Lancaster .

Around 1400 John was accepted as a knight in the Order of the Garter . In 1403 he was appointed Constable of England for life by his father. In 1414 he was named Earl of Kendal , Earl of Richmond and Duke of Bedford by his brother Henry V.

During the absence of his brother in France, he held the position of deputy in England. From 1421 to 1425 he was Baron von Elbeuf . After his brother's death in 1422, the diplomatically skilled John took over the reign in the north of France, which was ruled by England, for his underage nephew King Henry VI. , who also carried the French title of king. In his name he carried on the Hundred Years War (1337-1453) against the French Dauphin Charles VII and won the 1424 Battle of Verneuil over a Franco-Scottish army. This enabled him to advance into the Loire Valley and the inclusion of Orléans .

When Jeanne d'Arc intervened in the war with the support of the Dauphin and the latter was crowned king in 1429, England's power was increasingly pushed back, mainly because the Burgundian ally also distanced itself from England. John bought Joan of Arc from Duke Philip III. of Burgundy for 10,000 francs and kept them prisoner in a tower for five months. He had her condemned and burned as a heretic , but this could no longer turn the situation around for the English.

John died in Rouen in 1435 and was buried in the Notre-Dame Cathedral there.

In 1423 he married Anna, a daughter of Duke Johann Ohnefurcht von Burgundy . After her death in childbed in 1432, he married Jacquetta von Luxemburg . Both marriages remained childless.