The title of this article is ambiguous. Further meanings are listed under Loire (disambiguation) .

The Loire [ lwaːʁ ] ( Latin Lĭgĕr , Occitan Léger , Breton Liger , outdated German Liger ) is the largest of the rivers in France that flows into the Atlantic with a length of 1004 kilometers . From the Massif Central it flows north and north-west to Orléans , then south-west and west through Tours , Montsoreau , Saumur and Nantes to the confluence at Saint-Nazaire .

The Loire rises in the Massif Central , on Mont Gerbier-de-Jonc . After 2.5 km it meets its first tributary, Aigue Nègre , which has already passed 4 km. The Loire then flows northwards through Roanne to Digoin , from where the Canal du Center connects it with the Saône , a tributary of the Rhône . There it turns to the northwest in the Bourbon Trench , takes its largest tributary Allier shortly after Nevers and reaches Orléans , which geologically belongs to the Paris Basin .

From Orléans to shortly after Blois , the Loire flows in a south-westerly direction, then with deviations to the west. It passes Tours , Saumur and Nantes and flows into the Atlantic Ocean at Saint-Nazaire in the Bay of Biscay . Below Nantes, the Loire is already exposed to the tides and forms a 30-kilometer-long estuary .

Due to the length of the river and the significant amount of runoff, the river has a major impact on the design of the Loire Valley and the environmental conditions for its inhabitants. In 1856, 1866 and 1910 floods in the Loire caused great damage. In the upper reaches, the Loire was finally dammed several times at Roanne. In the middle and lower reaches, the Loire is still a free-flowing body of water today; no dams or locks affect their natural course. Due to the large amount of debris that the river transports, it is constantly changing its appearance, sandbanks and river islands are constantly being built up and relocated, but they offer ideal living conditions for flora and fauna . The Loire crosses the Loire-Anjou-Touraine Regional Nature Park on its way .

Because of the beauty of the valley, the French nobility preferred to settle here since the beginning of the Renaissance in the 16th century and built magnificent castles on the Loire . During this time, a large part of French politics took place here, so that Paris at times assumed an almost provincial character.

In 2000, the Loire Valley between the cities of Sully-sur-Loire and Chalonnes-sur-Loire was declared a World Heritage Site by UNESCO . Decisive were the rich architectural heritage, especially the numerous castles, and the two thousand year old development of the Loire Valley as a cultural landscape.

Castles of the Loire

The mesoclimate formed by the river favors the agricultural use of the Loire Valley. Of particular importance are the wine-growing areas on the river, which are grouped under the umbrella brand of the Val de Loire wine-growing area .

The inhabitants of the Loire Valley are called Ligériens , derived from Liger , the Latin name of the river. They celebrate the Festival de Loire every two years (in odd years) in Orléans and other participating locations . 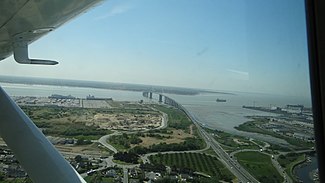 Estuary of the Loire at Saint-Nazaire

In the past, the Loire was an important axis for shipping and freight traffic, today it can only be used by larger ships from the estuary to Nantes . Above Nantes to the confluence of the Maine , at Bouchemaine , it is used by excursion boats, in the rest of the course you can only find fishermen and water sports enthusiasts . Because of its restricted navigability , the Loire is accompanied by navigable canals : the Canal de Roanne à Digoin between Roanne and Digoin and the Canal latéral à la Loire (German: Loire Lateral Canal ) between Digoin and Briare . A river cruise ship has been cruising the Loire between Saint-Nazaire and Angers since April 2015 . The new building, which was laid on keel in 2014, is equipped with a side-wheel drive so that it can sail despite the shallow water.

Many industrial companies that use hydropower and transport facilities on and around the Loire have settled in the urban centers.

There are four nuclear power plants along the Loire , operated by the French company Électricité de France (EDF): Belleville , Dampierre , Saint-Laurent and Chinon . They use the river to cool off. 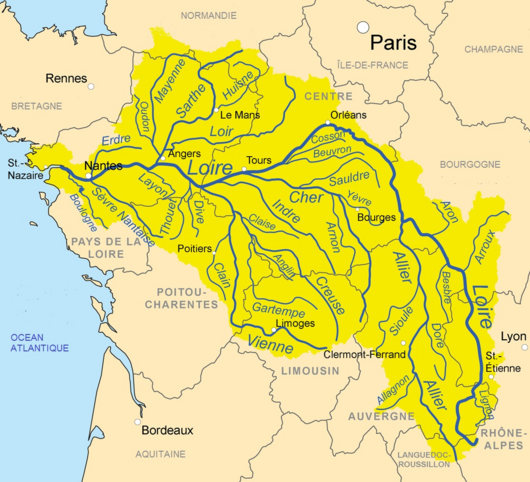 Major tributaries of the Loire

Explanations for the table: