Castles of the Loire 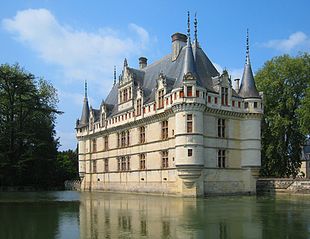 Azay-le-Rideau castle on the Indre 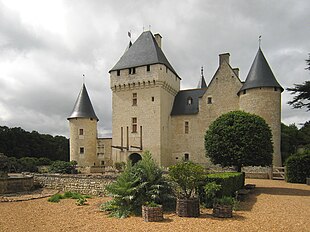 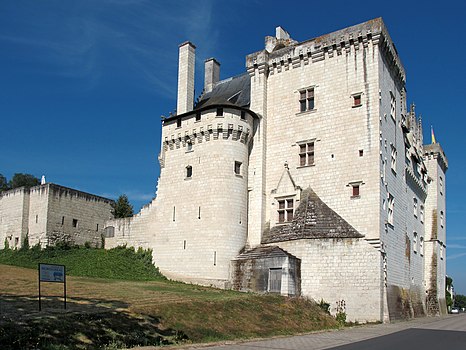 Montsoreau Castle on the Loire

The castles of the Loire include over 400 castle complexes that stand along the Loire and its tributaries in the French regions of Pays de la Loire , Center-Val de Loire and Burgundy . The Loire valley from Orléans to the mouth of the river in the Atlantic , together with the side valleys of Indre and Cher, is one of the most popular travel destinations in France . From the Middle Ages on, a unique collection of castles and palaces from all eras of European art history was built here.

In the miniature park Loire Castles (French: Mini-Châteaux Val de Loire) in Amboise , models of 44 of the most famous castles in the Loire can be seen in 1:25 scale.

During the Hundred Years War , which lasted from 1337 to 1453, the Loire temporarily formed the border between the territories occupied by England in the north and the French heartland. During this time, a massive expansion of the castles and fortresses was carried out, which should serve as bulwarks against the English to protect the residents. After the end of the war, the mostly Gothic castle complexes lost their strategic importance, so that some fell into disrepair and were given up. However, today's castles have been built here on the foundations of others since the beginning of the Renaissance in the 16th century. Because of the beauty of the valley, the nobility preferred to settle on the Loire; the feudal lords held court here and ruled over their fiefs from here . In the 15th and 16th centuries, the age of the Loire kings , a large part of French politics took place here, so that Paris at times assumed a provincial character.

The Loire Valley retained its cultural and political importance until the mid-16th century. With the return of the court to Paris in 1528, the political and cultural loss of importance of the Loire Valley began, although under the influence of Queen Catherine de Medici from Italy , French culture and the art of living were once again cultivated here. During the crisis of the Huguenot Wars , the court withdrew to the Loire, but without a new period of prosperity set in. With Henry IV's accession to the throne , the center of political and cultural life in France finally shifted back to the Paris area. Particularly after the construction of the Palace of Versailles , it became more and more apparent that the Loire castles were now in the provinces and that a large court for the nobility here became too expensive. However, many of the castle complexes were not completely abandoned, but continued to be inhabited and sometimes expanded; so that today you can find all architectural styles from Renaissance to Baroque and Classicism to historicism . Many castles continued to be used as hunting castles or summer residences .

Some of the castles and fortresses are only a few kilometers away from each other, the Loire Valley is located in one of the most beautiful landscapes in France, is mostly quite flat and ideal for cycling. The entire region is excellently developed for tourism.

In Duke Berry's book of hours there are many portraits of the Loire castles in their form from the 15th century.

Castles on the Loire

Amboise Castle is considered "the cradle of the Renaissance in France". After returning from the Italian campaigns, the young Charles VIII decided to decorate and expand the castle in the Renaissance style . On April 7, 1498, he was killed in an accident: he bumped his head violently against a low door frame and died shortly afterwards of his injuries. Leonardo da Vinci spent the last three years of his life in the Clos-Lucé mansion below the castle, from spring 1516 to May 2, 1519. Today the house is a museum where you can find frescoes by the painter and models based on his designs.

A 40-meter-high pagoda stands near Amboise as the last remnant of the Chanteloup Castle , which belonged to the Duke of Choiseul , the minister of Louis XV. was.

In addition to Chambord, Francis I also built Blois Castle, which was built in several planning and work steps from the 13th century. The architectural influence of Italy is noticeable in the building. Under slate roofs and ornate chimneys you will find a long gallery and numerous loggias , which are more in keeping with the mild climate of Italy than the harsh French winter of the 16th century.

Blois has a particularly bloody history: Henry III. murdered his rival, the Duke of Guise , "the scarred" on December 23, 1588 . Catherine de Medici died a few days later. Louis XII. was born in Blois. When he became king, Blois was the sole residence and thus the political center of France for several years . Thanks to extensive restorations , today you can marvel not only at the magnificent wood paneling , but also at a sophisticated system of secret compartments.

Chambord is probably the most famous castle in the Loire. It has 440 rooms and almost 400 fireplaces. The facade is 156 meters wide and the ornate roof is adorned with a multitude of bay windows, turrets and chimneys. 18,000 craftsmen are said to have worked on this castle for King Franz I. Construction began in 1519. The palace is considered the forerunner of Versailles , but for Francis I it was only a hunting lodge for the court , decor for receptions and for the splendor of a king who wanted to make up for his political and economic failures with architectural masterpieces. The Valois Franz I had tried in vain to buy the electors in the Roman-German emperor election in 1519 with huge sums in order to get to the German imperial throne. Now, with "triumphant impetus" and the help of Italian artists, he built a castle which, in the judgment of his Habsburg rival, Charles V , was "the epitome of what human art can do". The construction of the palace complex brought about the temporary ruin of the court finances.

A special feature is the double-flight spiral staircase, possibly designed by Leonardo da Vinci , which can be climbed on two paths that do not intersect anywhere. The castle has a park with a 32 kilometer long wall, the longest in France, which encloses the castle park . Six gates and six avenues provide access to the castle, in which the heraldic animal Franz I, a fire-breathing salamander , can be found more than 800 times; it was therefore also known as the “Salamander Castle”. In 1947 the French state took over the facility, which had fallen into disrepair over the centuries. He initiated a restoration that would take 30 years. 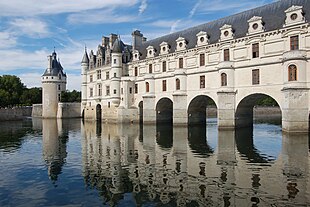 Chenonceau Castle is built on a multi-arched bridge over the Cher , a tributary of the Loire, and is surrounded by a large park. It can be reached via an avenue of plane trees made up of centuries-old trees.

The castle, which stands on the foundations of an old mill, was a gift from King Henry II to his lover Diane de Poitiers . It was only after the king's death that his widow Katharina von Medici expanded it with a three-story gallery on the bridge, which in the 16th century served as a ballroom, among other things. Today many valuable paintings by Rubens, Tintoretto and other old masters are exhibited in the castle.

In 1914 the gallery of the palace was temporarily converted into a military hospital, which housed over 2,000 war invalids until the end of the First World War . During the Second World War , this castle was a loophole for many people from the German occupation forces: The main entrance of the castle was in the occupied area, but the south door of the gallery at the back opened to the free zone.

In the Loire Valley

Following the course of the river 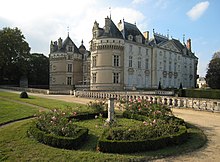 In the valley of the Indre

In the Vienne valley

In the Loir Valley

In the Maine Valley

Commons : Castles on the Loire  - Album of pictures, videos and audio files