Bourgogne was a redirect to this article.

In the east, Burgundy borders on the Franche-Comté region , in the north on Champagne-Ardenne and Île-de-France . To the west lies the Center-Val de Loire region , while the Auvergne and Rhône-Alpes regions border in the south .

With the Morvan , a foothill of the Massif Central , Burgundy has a share in the old crystalline areas. Otherwise, Mesozoic sediments (mostly from the Jura) form the bedrock. On the eastern flank, fractures lead to the Saône furrow.

The Burgundian Gate as the name of the natural valley between the Vosges and the Jura does not border on today's Burgundy region, but on the Free County and thus refers to the name assigned to historically different areas. 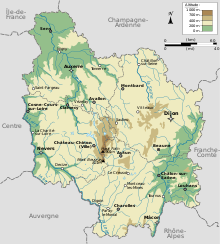 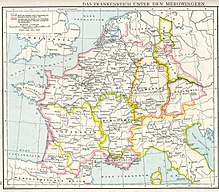 The history of today's French region of Burgundy is to be distinguished from the complex development of the different areas, whose name has been linked at certain times with the name of the East Germanic tribe of the Burgundians since the time of the Great Migration ; Today's region is a geographically and culturally grown unit with a core area in the Saône Basin, which largely corresponds to the Duchy of Burgundy , which existed from the 10th century to the French Revolution , the only large geographical unit that still refers to this tradition by name. The following relates largely to this area, but the delimitation of the historical region over 1500 years was as flexible as that of hardly any other European region.

Today's region was already inhabited by people in the Paleolithic . Finds on the rock of Solutré indicate that it dates back to around 15,000 BC. After a dense settlement. But already at the time of the Neanderthals and the first modern humans around 40,000 years ago, more and more sites can be found, for example the Grottes-de-la-Verpillière I and II near Germolles, Mellecey .

From the 6th century BC Until the arrival of the Romans , the Celtic culture of the Gauls was predominant, mainly represented by the Haedu and the Mandubians , who are mentioned in Caesar's De bello Gallico . Important settlements of the tribes were Bibracte near today's Autun and Alesia near Dijon.

Around 59 BC The Romans defeated the Helvetii and other Gallic tribes under Caesar at Bibracte (today Saint-Léger-sous-Beuvray ), on Mont Beuvray , between Autun and Le Creusot . In 52 BC The Romans, again under Caesar, defeated the Gallic uprising under Vercingetorix at Alesia , today's Alise-Sainte-Reine . This was followed by the incorporation of Gaul into the Roman Empire and the slow linguistic and cultural Romanization of its inhabitants.

Around 43 BC Chr. Was Augustodunum ( Autun ) was founded. Viticulture began in the region around 280 .

After the battle of the Catalaunian fields in 451, the Burgundians - coming from the north - settled in the region with the tolerance of the Romans. However, the capital of the Burgundian Empire was initially Genava ( Geneva ).

Part of the Franconian Empire

Since 534, the name Burgundia has referred to a Franconian partial empire ( Kingdom of Burgundy ), which was cut into an eastern and a western half in the Treaty of Verdun in 843 when the Franconian Empire was divided up: In the east (largely around Lake Geneva) it was created new Kingdom of Burgundy (Hochburgund), in the west a French feudal duchy , which is the starting point for today's region.

The Duchy of Burgundy was ruled from 1032 to 1361 by a sideline of the French royal family, the Capetians ( Elder House of Burgundy ). In 1363 it passed to Philipp von Valois , who founded the House of Burgundy as a side line of the French royal family of the Valois . This House of Burgundy relied on extensive territorial expansion, which led to the formation of an intermediate empire between France and the Holy Roman Empire, the southern part of which was the old Duchy of Burgundy and at times the Free County and the northern part of which was the Netherlands . After the death of the last male duke from the House of Valois, Charles the Bold , in the Burgundian Wars (1477), this rulership complex was divided. The Habsburgs secured by marrying Maximilians with the hereditary daughter Charles the Bold, Mary of Burgundy , the (commercial) most significant parts of the kingdom, especially Flanders and the free county. The duchy itself, on the other hand, i.e. the western part of the Burgundian core area, was withdrawn from the French crown as a fiefdom , since the ducal dignity had fallen to the daughter of Charles the Bold, Mary of Burgundy. The duchy was not re-awarded during the entire Ancien Régime , but belonged to the autocracy of the French crown. However, it did not become part of the Domaine royal , but remained self-governing as a province with its own parliament .

Dissolution after the French Revolution (1790)

The duchy was dissolved after the French Revolution in the course of the division of the state into departments in 1790; with him the name Burgundy for a political-administrative unit disappeared.

After the Second World War, on March 21, 1948, some of the departments of France were combined into larger territorial alliances, the so-called Igamien , under the supervision of a special envoy of the central government (acronym: IGAME) . Among them was the Igamie Dijon, which comprised the eight departments that later became the French regions of Bourgogne and Franche-Comté, thus abolishing the administrative separation between the western and eastern core areas of Burgundy for the first time since the early Middle Ages. The igamy lasted until 1964.

When France was divided into program regions in 1956, four departments formed the region of Burgundy (Bourgogne) within its current boundaries. In 1972 the region received the status of an établissement public under the direction of a regional prefect. Through the decentralization laws of 1982, the Burgundy region also received the status of a collectivité territoriale ( territorial body ), which until then had only been owned by the municipalities and the départements . In 1986 the regional council of the Burgundy region was elected directly for the first time. Since then, the region's powers vis-à-vis the central government in Paris have been gradually expanded.

The region has had a regional partnership with the German state of Rhineland-Palatinate since 1962, which was institutionalized with the CRB House Burgundy in Mainz. The Prime Minister Kurt Beck was declared an honorary citizen of Burgundy in 2012 on the 50th anniversary of the partnership.

Description : The coat of arms is quartered ; Field 1 and 4 sprinkled with gold lilies on blue and a red and white Twelver denomination in board (Neuburgund) , and the other fields (2,3) and three blue oblique beams in gold, with red board (Altburgund) .

The coat of arms goes back to the two Burgundian houses, the older and the younger.

The most populous cities in the Burgundy region are:

The Bourgogne region has been administered by a President of the Regional Council since 1986 and is divided into four departments :

Burgundy is an agricultural region that is world-famous for its red wines from the wine regions Côte de Nuits and Côte de Beaune as well as for the white wines from the Mâconnais and Chablis (see Burgundy (wine) ). In addition, livestock is farmed in Burgundy ; Charolais cattle and Bresse chickens are typical of the region . In South Burgundy, on the border with Auvergne , there are still some old oil mills for nut and vegetable oils, including the oldest, historic Jean Leblanc oil mill , which is still in operation today. 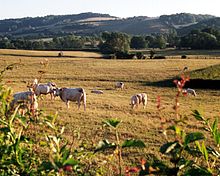 The industry in Burgundy is developed only weakly, despite its location and focuses mainly in the area around Dijon. The metal industry around Le Creusot , which flourished in the 19th century, has become meaningless. Today there are many medium-sized plastics processing companies in the area around Dijon due to the proximity to a large chemical plant in Tavaux, which itself belongs to the Franche-Comté region. In Chalon-sur-Saône there is an electrical industry and considerable shipbuilding, including for submarines . The ships are brought to the Mediterranean via the Saône and the Rhône.

The main traffic routes for the national road, the A6 Paris -Burgund- Provence , A31 Metz-Nancy-Burgundy-Lyon and A36 Mulhouse-Burgundy-Lyon, the main national railway lines are the LGV Sud-Est ( Paris - Le Creusot - Mâcon - Lyon ) and the LGV Rhin-Rhône (Dijon - Besançon - Belfort - Mulhouse ). There are over 1000 km of navigable waterways.

Arboretum de Pézanin
→ Main articles : List of churches and monasteries in Burgundy  and castles and palaces in Burgundy

In addition to numerous sacred buildings, there are many palaces and castles in Burgundy, which are widely scattered in the rather rural heart of France .

The important churches and monasteries include:

Burgundy is mentioned in the Nibelungenlied with numerous figures, some of them historically inspired . There, however, the Burgundy landscape described here is not meant, but the Burgundy .