Taizé is a French municipality with 178 inhabitants (at January 1, 2017) in the department of Saone-et-Loire in the region of Bourgogne Franche-Comté .

Neighboring municipalities of Taizé are Ameugny in the north-west and north, Bray in the east, Massilly in the south and Flagy in the south-west.

The small community became known through the community of Taizé , which settled in the village in 1949. It attracts tens of thousands of mostly young people from all over the world every year.

The Maria Magdalenenkirche in the village

In addition to the irregular Roman Catholic masses in the parish in the village church of Ste-Marie-Madeleine , a Roman Catholic mass is celebrated daily in the Church of Reconciliation . This usually takes place on weekdays in the crypt below the church, on Sundays there is a Roman Catholic Eucharist in the church . In the Church of Reconciliation, the ecumenical community holds its prayer times three times a day. Protestant and Orthodox services, held by guests of the community, also take place at irregular intervals in the reconciliation or village church. 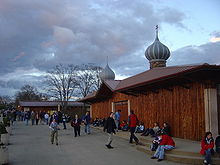 The Church of Reconciliation of the Community

Commons : Taizé  - collection of images, videos and audio files
Municipalities in the Arrondissement of Mâcon