Tournus [tuʁny] is a French municipality with 5545 inhabitants (at January 1, 2017) in the department of Saone-et-Loire in the region of Bourgogne Franche-Comté .

Tournus is a member of the Communauté de communes du Tournugeois .

Tournus is located on the right bank of the Saône , about 28 kilometers north of Mâcon and about 26 kilometers south of Chalon-sur-Saône .

Viticulture predominates in the area . Tournus belongs to the Mâcon Villages appellation. There are also quarries in the area. Traditionally, chairs are made in Tournus.

Tournus is located on the Mâcon - Chalon-sur-Saône railway line , on the A 6 , on the RN 6 , and on the Saône, which is navigable in this area .

Tournus is one of the few French cities where the establishment of a commercial zone on the outskirts was prevented by popular resistance. As a result of the protests, Mayor Claude Roche, who was elected in 2014, was forced to abdicate. In the new elections in October 2017, the opposition list received 61% of the vote. The new mayor is Bertrand Veau, a candidate from the citizens' initiative. The candidates of the majority parliamentary group had been selected by representatives of the citizens' groups - also a novelty. In the program of the city council majority, grassroots democratic, participatory elements play an essential role. 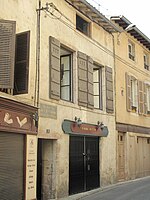 Birthplace of the painter Jean-Baptiste Greuze

Tournus has four restaurants, each with a Michelin star: Aux Terrasses, Meulien, Le Rempart and Greuze. The city has the highest "star density" per capita worldwide.

Tournus was the starting point of the 7th stage of the Tour de France 2010 . The Musée de Vélo provides information on the development of the bicycle.

Commons : Tournus  - collection of images, videos and audio files
Municipalities in the Arrondissement of Mâcon