Bourgogne-Franche-Comté [ buʁgɔɲ fʁãʃ kɔ̃te ] (abbreviation BFC ; German  Burgundy- Free County [Burgundy] ) is the name of the French region that was created on January 1, 2016 through the merger of the previous regions of Burgundy and Franche-Comté . The capital of the region is Dijon .

Bourgogne-Franche-Comté is the fifth largest region with 47,784 km² (excluding overseas regions) and has 2,811,423 inhabitants (as of 2017), making it the third smallest region in terms of population. It is divided into the eight departments of Côte-d'Or , Doubs , Haute-Saône , Jura , Nièvre , Saône-et-Loire , Territoire de Belfort and Yonne . It borders (starting clockwise from the north) with the Grand Est region , Switzerland and the Auvergne-Rhône-Alpes , Center-Val de Loire and Île-de-France regions .

The most populous cities in the Bourgogne-Franche-Comté region are:

The Bourgogne-Franche-Comté region is divided into eight departments :

Result of the election of the regional council on December 13, 2015:

Bourgogne is particularly known for its viticulture. Over 200 million bottles are filled annually in the AOC wine cellars ( Appellation d'Origine Contrôlée ) south of Dijon. The vineyards and picturesque villages of the Plateau bourguignon ( Côte de Beaune , Côte challonaise , Côte de Nuits ) even attract tourists from Japan and the United States of America.

Cattle breeding and the meat industry are very present further west : the white Charolais cattle graze here; the meat tested by the surrounding laboratories is world-class. In general, the Bourgogne with its oak and pine forests is a kind of green lung for France and, as the source of the Yonne, it supplies water for the Paris basin ( Bassin parisien ). The factories of the steel industry in Le Creusot , for example, had to close their doors in the past few decades; Of its importance as an industrial region, almost all that remains is the good TGV connection, which connects the région-passoire (transit region), which is considered part of the diagonale du vide (the empty diagonal of France), with Paris, Lyon and Marseille.

The Franche-Comté region is known as “Siberia of France” (sometimes −20 to −40 degrees in winter) and is characterized by poor infrastructure in the village-like Jura basin. Only cheese production thrives here (AOC cheese: Comté & Morbier).

Only in the south and in the north (Jura / Oyonnaux and Montbéliard / Belfort / Sochaux ) are large world-class companies located: the French car manufacturer Peugeot produces near Montbéliard and Sochaux ; In Belfort, the railway and TGV supplier Alstom is boosting the economy and in the southern Jura, not far from Oyonnaux, there is the plastics-vallée - the location of the largest plastic processing companies in Europe, the French equivalent of Silicon Valley . The two economic centers benefit from the Rhine-Rhône connection, the proximity to Lyon , Alsace and Switzerland ( Basel ). Other economic centers are the regional capitals Dijon and Besançon.

However, in terms of population development, this is just as much a shortcoming as the weak infrastructure, because all the surrounding regions and cities of France are overtaking the tranquil Franche-Comté with the small Besançon.

The region, newly created in 2016, unites the historic Burgundian heartland, which was already divided into two political units in the Middle Ages: the Duchy of Burgundy , which made up a large part of the later region of Bourgogne , and the Free County of Burgundy (French Franche Comté de Bourgogne ), which largely coincides with the later Franche-Comté region coincided.

The name was initially formed provisionally from the alphabetical order of the merged regions and was finally confirmed by the Conseil d'État on October 1, 2016, following a resolution by the regional council .

The Nièvre department is roughly the same size as the historical Nivernais . The Territoire de Belfort belonged to the German annexation of Alsace-Lorraine after the Franco-German War (1870-71) to Alsace after and was the First World War not with the Haut-Rhin department reunited, but to a dedicated department that is no longer the Alsace is counted. The northern part of the Dèpartemants Yonne was historically part of the Champagne . 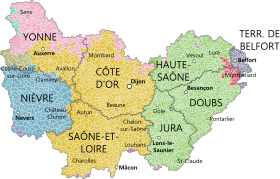 Map of the region and its departments as well as the historical provinces of France that existed on their territory at the time of the French Revolution.