This article describes the city in France; for the cattle breed named after her see Montbéliard (cattle) .

Montbéliard (German formerly Mömpelgard ) is a French city with 25,395 inhabitants (as of January 1, 2017) in the Doubs department in the Bourgogne-Franche-Comté region .

The former German name "Mömpelgard" is based on 400 years of belonging to the secular and historical territory of the House of Württemberg .

The place is at the confluence of the Lizaine in the lower reaches of the Allaine , before it flows a few kilometers south into the Doubs . The city is the seat of a sub-prefecture in the north of the Doubs department near the border with the neighboring department Territoire de Belfort about 15 kilometers south of its capital Belfort . The landscape known as the Burgundian Gate is defined by low, mostly elongated hills, separated by wide river valleys. The distance to the southern foothills of the Vosges and the elevations of the French Jura is about 25 kilometers each.

At the beginning of the 1960s, Montbéliard was able to record strong population growth, which continued until the mid-1970s and then slowed significantly. Since the beginning of the 1980s, the number of inhabitants has decreased significantly due to emigration. At the 1999 census, there were 27,570 residents in the city. The population in the Unité urbaine ran parallel to this. After a sharp increase there, too, the total population fell again to 114,670 inhabitants by 1999. The metropolitan areas of Montbéliard and the northern neighboring city of Belfort are very close together. A total of over 300,000 people live in this metropolitan area. 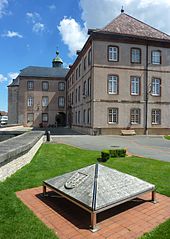 Pyramid on the terrace of Montbéliard Castle by Markus Wolf (1997)

The first written mention of the city ("Mons Biliardi" or "Mons Biliardae" or according to other sources "Mons Peligardi") dates from the year 985; it is said to have been fortified at that time and soon formed the center of the County of Mömpelgard .

By his father Count Eberhard III. Marriage vows made by the later Count Eberhard IV (1415-1417) with Countess Henriette von Mömpelgard (House of Montfaucon), Montbéliard came to the House of Württemberg in 1397 , since Henriette's father Heinrich von Mömpelgard had no male heirs. The corrupt German name appears for the first time in 1464 as Mümppellgart (1495 Mümpelgart, 1603 Mömpelgart). The barbel (fish) from Mömpelgard appear in the coat of arms of the Dukes of Württemberg until 1817.

In the following years managed the house Württemberg neither to extend the French possessions and a closed enclave to round off , still closing the gap between core Wuerttemberg (to Stuttgart ) and Mömpelgard what the geographical location was owed as between Stuttgart and Montbéliard with Austria and France found the strongest military powers of their time. While the County of Württemberg was divided, Count Eberhard V , known as Eberhard im Bart , ceded all of the Württemberg properties on the left bank of the Rhine in 1473 - in addition to the County of Mömpelgard, the Lords of Reichenweiher ( Riquewihr ) and Horburg to his cousin Heinrich von Württemberg , so that he now has his own Regent sat in the castle in Montbéliard. However, the rule was constantly threatened by Burgundy claims to power. In the Münsingen Treaty of 1482, which reunited the divided land, the possessions on the left bank of the Rhine fell back to Duke Eberhard im Bart.

Duke Ulrich tried to introduce the Reformation as early as 1524 , the driving force of which was Guillaume Farel . When Farel was expelled from Württemberg, he found refuge here. However, the introduction of the Reformation initially failed due to the resistance of the Archbishop of Besançon . In 1537/38, however, the first Protestant church ordinance (in French) was finally published. Since the Reformation, Montbéliard has been a Lutheran enclave in the middle of a Catholic environment. The pastors for Mömpelgard and Horburg-Reichenweier were trained with the Württemberg theologians in the " Stift " at the University of Tübingen . The common Lutheran creed created a strong connection between Württemberg and the Alsatian territories, although the Württemberg dukes once again installed their own rulers from the branch lines of the house. The people around Mömpelgard in particular were always threatened by France . However, they also provided important cultural impulses. In the 17th century, the important Württemberg builder Heinrich Schickhardt fortified the residential town of Mömpelgard and built the large Lutheran church, the Temple Saint-Martin , along with other important buildings such as the Renaissance castle in the city center from 1601 to 1607 . The roof turret was added in 1677.

From 1617 a branch of the Dukes of Württemberg ruled Mömpelgard again. Mömpelgard was constitutionally independent from Württemberg; it did not send any delegates to the Württemberg state parliament . The last Duke Leopold Eberhard tried to rule in an absolutist way, which led to serious tensions.

After his death in 1723 Mömpelgard fell back to the Stuttgart line of the House of Württemberg; however, all lords were still occupied by France until 1736. The last decades of the Württemberg rule were calm. From 1769 Friedrich Eugen von Württemberg resided in Mömpelgard and held court in front of the city gates in Étupes , from where he was able to marry off some of his children very favorably. The daughter, Duchess Sophie Dorothee , became the wife of Tsar Paul I of Russia in 1776 as Maria Fjodorovna . The Baroness Henriette von Oberkirch describes in her memoirs the life at Mömpelgarder Hof and the youth of Maria Feodorowna.

In the course of the French Revolution , there were uprisings in the Württemberg rulers from 1789. The revolutionary reign of terror raged here too. From 1793 the town and county of Mömpelgard were finally in French hands. In 1796, Friedrich Eugen, now Duke of Württemberg, ceded the lords on the left bank of the Rhine to France in a separate peace in Paris. In return, under the influence of Napoleon , the Duke of Württemberg received large secular and spiritual areas in southwest Germany through the Reichsdeputationshauptschluss .

Although the current residents of the former rulers on the left bank of the Rhine are French citizens, the former Württemberg tradition is still visible. There are buildings that are reminiscent of the former rule. Especially in the Lutheran orientation of the cities and villages, a peculiarity has been preserved that goes back to the former affiliation with Württemberg. A connection between Ludwigsburg and Montbéliard was established here as the first Franco-German town twinning after the Second World War . Both cities are former residences of the dukes of Württemberg. In addition, the Lutheran Evangelical Church in Württemberg still sends pastors to support the Lutheran congregations.

Painting of the city "Mümpelgart" in the Bebenhausen monastery

Montbéliard is the seat of the sub-prefecture of the arrondissement of Montbéliard .

The city of Montbéliard is the seat of the municipal association Pays de Montbéliard Agglomération .

Montbéliard has a train station on the Belfort – Besançon – Dole railway line opened on June 1, 1858 .

From June 29, 1868, the line Montbéliard – Audincourt – Morvillars – Delle branched off from the Belfort – Dole line ; passenger traffic on this was stopped in 1938. Between 1969 and 1993, freight traffic on the branch line was also gradually discontinued, so individual sections of the line were removed; the route is now no longer passable.

The largest plant of the Peugeot car brand and the Peugeot Museum are located in neighboring Sochaux , with the Peugeot plant partly located in the Montbéliard area. A total of around 34,000 people are directly or indirectly employed by Peugeot in the area.

Chancel in the Temple Saint-Martin

Montbéliard, formerly in Württemberg, has had a town twinning with Ludwigsburg in Baden-Württemberg since 1950 . Only five years after the end of the Second World War it was the first conclusion of a Franco-German town twinning. Another partnership exists with Greensboro in the US state of North Carolina .

Communes in the arrondissement of Montbéliard