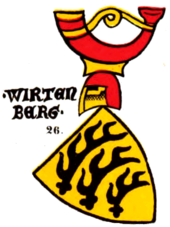 The House of Württemberg is a noble family that has existed to this day and ruled and shaped large areas of southwest Germany for centuries, most recently as kings of Württemberg until 1918 . The family name - derived from the ancestral castle on the Wirtemberg - was later used for the entire state of Württemberg and thus also for the state of Baden-Württemberg . 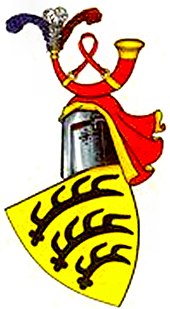 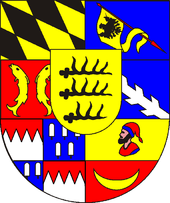 Coat of arms of the Duchy of Württemberg (1786) 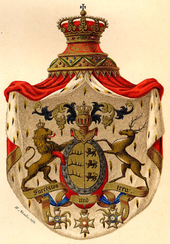 Coat of arms of the Kingdom of Württemberg

According to recent research, the family has its origins in the vicinity of the Salian imperial family. A long suspected descent from Luxembourg, however, is rather unlikely.

Around 1080 the ancestors of today's Württemberg people came to the Stuttgart area. Through a marriage they became heirs of the house of Beutelsbach and built the Wirtemberg Castle . Of this, in the church that is in its place today , as a Spolie, is the consecration stone of the castle chapel. It is a stone document stating that the Worms shepherd Adalbert II consecrated the castle chapel there on February 7, 1083. This stone is also considered to be the oldest documented evidence of the Württemberg ruling house.

Probably in the first half of the 13th century the people of Württemberg obtained the count's office. Their territory, initially only encompassing the immediate vicinity of the castle, grew steadily, especially through purchases of impoverished houses such as those in Tübingen . With the marriage of Count Ulrich I to Mechthild von Baden in 1251, the future capital Stuttgart became part of Württemberg. In the Battle of Döffingen , which was victorious for Württemberg , Count Eberhard II was able to break the power of the Swabian League of Cities in 1388 . In 1442 the country was divided, but reunited in 1482–1492.

At the Diet of Worms in 1495, Count Eberhard V was elevated to Duke by the Roman-German King and later Emperor Maximilian I. Between 1534 and 1537, Duke Ulrich introduced the Reformation , making the country an important Protestant territory. This made the Duke of Württemberg head of the Protestant regional church.

When the main Protestant line in the male line became extinct in the 18th century, a line of the house came to the government that provided Duke Karl Alexander, a Catholic ruler. The Catholic dukes, however, had to cede the church leadership to a church council made up of members of families from the Württemberg upper class. It was not until Duke Friedrich II. In 1797 that a Protestant prince took office again.

Due to the political upheavals during Napoleon's reign , Duke Friedrich II was made electoral prince in May 1803 and received secularized and mediatized rulers, which significantly enlarged his country. On January 1, 1806, Elector Friedrich accepted the dignity of King and was able to expand his kingdom through additional areas.

King Wilhelm I issued a new house law in 1828, in which the rights and duties of the ruling family were stipulated, including exclusive primogeniture in the male line and marriage restrictions on an equal level.

When the monarchy in Germany was abolished at the end of the First World War , King Wilhelm II, as the last German sovereign , abdicated on November 30, 1918 and accepted the title of Duke of Württemberg , whereas the descendants of the ducal line are still called Duke today wear from Württemberg . After his death in October 1921, the household assets and the theoretical claim to the throne passed to this line of the house, which had become Catholic in the 19th century. As early as 1919, the former king gave Altshausen Castle near Ravensburg to the presumptive heir to the throne, Duke Albrecht, as his residence. The head of the House of Württemberg lives there to this day, which as a former sovereign house still belongs to the so-called First Department of the European nobility .

Inequitable descendants are among others the noble families

Heads of the House of Württemberg since 1918

The castle Wirtemberg from the year 1080 was 1092-1495 repeated the Counts Wirtembergs. Konrad von Wirtinsberk was named as a witness in a document from 1092, this is the oldest documented mention of the name Württemberg . In the 14th century, the Old Palace in Stuttgart became the headquarters of the counts and the court chamber . In 1342 the indebted Count Palatine of Tübingen sold their town and castle of Hohentübingen to the Counts (and later dukes) of Württemberg, which they used as a residence next to Stuttgart or Urach . Later it served as a state fortress in addition to the fortifications of Hohenneuffen , Hohenurach , Hohenasperg , Hohentwiel and Schorndorf and Kirchheim (Teck) . In 1397 the County of Mömpelgard (Montbéliard) with Mömpelgard Castle in Franche-Comté in eastern France came to the House of Württemberg (until 1793).

At the beginning of the 16th century, Hellenstein Castle was used as the hunting lodge of the Württemberg court, as was the secularized Bebenhausen Monastery . The widow's seats included a. Kirchheim Castle , Castle Brackenheim , Castle Göppingen , Castle Leonberg and Schloss Stetten .

The Ludwigsburg Castle , the most important Württemberg palace, was from 1704 to 1733 under Duke Eberhard Ludwig in Baroque style built and the pleasure palaces Favorite (to 1723) and Monrepos supplemented (from 1760). The New Palace Stuttgart was built between 1746 and 1807 as a residence and residential palace. From 1768 to 1775 Solitude Palace served as a hunting and summer residence, followed by Hohenheim Palace in 1776 . In the 19th century, the rarely used Rosenstein Castle in Bad Cannstatt was built in 1824–1829 , the Wilhelmspalais in Stuttgart, the Kronprinzenpalais 1846–1850 and the Berg Villa from 1845–1853 . With Altshausen came in 1810 a secular possession of the Teutonic Order and the monastery Hofen 1806, the later so-called Castle Friedrichshafen into the possession of the royal family; Both, like Monrepos, belong to the House of Württemberg to this day. 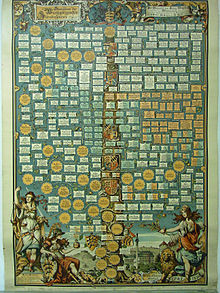 Family tree of the House of Württemberg

Commons : Coat of arms of the House of Württemberg  - collection of images, videos and audio files