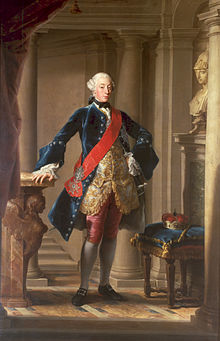 Karl Eugen as the young Duke of Württemberg

Duke Karl Eugen, who always called himself Karl , was the eldest son of Duke Karl Alexander and his wife Maria Augusta von Württemberg, née Princess Maria Augusta von Thurn und Taxis . After the early death of his father Karl Alexander, Karl Eugen ascended the throne as early as 1737 at the age of nine , but until he came of age under the administration of Dukes Carl Rudolf von Württemberg-Neuenstadt and Karl Friedrich von Württemberg-Oels . The young Karl Eugen and his two brothers came to Berlin to be educated at the court of King Frederick II of Prussia , also to keep him and his brothers as far as possible from the sphere of influence of the Habsburgs . Karl Eugen received a careful upbringing, his music teacher was Carl Philipp Emanuel Bach . In 1744, at the age of 16, Karl Eugen was declared of legal age and took over the government of the Duchy of Württemberg.

Immediately after he took office, the duke had the body of Joseph Suss Oppenheimer hanged and buried, which had remained in an iron cage for six years as a deterrent after his execution in 1738. He got into an argument with his mother in 1750 and had her interned in Göppingen Castle .

Karl Eugen's reign coincided with the height of absolutism , and the young sovereign did everything to make his court one of the most brilliant in Europe. With enormous financial outlay, which brought Württemberg to the brink of ruin, he succeeded at times: for his magnificent court he not only had the New Palace in Stuttgart built, but also Solitude , Monrepos and later Hohenheim Palace . He had Solitude Palace, at times his favorite place to stay, connected to Ludwigsburg Palace via the straight Solitude-Allee , which was exclusively reserved for the court . At a right angle from it he had an axis from the Solitude to the south of Stuttgart laid out. As far as possible, the best artists from all branches were committed to Württemberg.

The Duke's festivals were as legendary as his countless affairs and despotism. The poet Christian Friedrich Daniel Schubart , who mocked him and his mistress Franziska von Hohenheim , had Karl Eugen imprisoned at the Asperg mountain fortress for a period of ten years. He also threatened the poet Friedrich Schiller with a writing ban and imprisonment.

In 1741 Karl Eugen had met the niece of King Frederick II of Prussia, Princess Elisabeth Friederike Sophie von Brandenburg-Bayreuth , daughter of Margrave Friedrich von Brandenburg-Bayreuth , whom he married in 1748. The couple's marriage did not last long, however, and in the autumn of 1756, Duchess Elisabeth Friederike Sophie returned to her parents' court in Bayreuth . The duke kept various mistresses , some of whom lived by his side for several years and with whom he had numerous illegitimate children. In 1771 he met the married Baroness Franziska Leutrum von Ertingen , née Baroness von Bernerdin (1748–1811), and she too became his mistress. After their divorce in 1772 and the death of his wife Elisabeth Friederike Sophie in 1780, Karl Eugen morganatically married Franziska in 1785, who had meanwhile been raised to Countess of Hohenheim .

In old age Karl Eugen increasingly turned to agriculture and education. The establishment of an Académie des arts in Stuttgart in June 1761 was followed by the Ducal Public Library in Ludwigsburg , where the court was located at that time , in 1765 , which is now the Württemberg State Library in Stuttgart , for whose inventory he spent considerable sums. In 1767 he installed himself as "Rector perpetuus" of the Tübingen University Eberhardina, which he had renamed Eberhardo-Carolina two years later, and held the office of rector until his death in 1793. In 1770 he founded an educational institute at the ducal Solitude Palace , which developed out of modest circumstances into the high-ranking High Charles School . In 1781 he was elected an honorary member of the Göttingen Academy of Sciences .

Historians do not agree to what extent his second wife had an influence on his change from a despot and indulgent to a caring father. Even Friedrich Schiller , who had left the country at a young age because of Karl Eugen, made his peace with him when he died. Christian Friedrich Daniel Schubart was released from prison shortly before his death and appointed as music and theater director at the Herzogshof zu Stuttgart and was allowed to work again as editor. The Duke traveled extensively with his second wife and had diaries kept of them.

On October 24, 1793, Duke Karl Eugen died in his still unfinished Hohenheim Palace near Stuttgart and was buried in the crypt of Ludwigsburg Palace . His two younger brothers Ludwig Eugen and Friedrich Eugen followed him on the throne at a short distance.

with the actress Luisa Toscani:

with the singer Caterina Bonafini :

Wikisource: Secrets of a more than fifty-year-old Wirtemberg statesman  - sources and full texts