Karl Friedrich Alexander von Württemberg (* 6. March 1823 in Stuttgart , † 6. October 1891 ibid) was from 1864 to 1891 as Karl the third King of Württemberg . During his term of office, Württemberg joined the North German Confederation , which became the German Empire in 1871 . 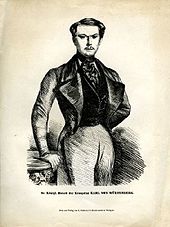 On January 18, 1846, he got engaged in Palermo to the 23-year-old Grand Duchess Olga (1822-1892), a daughter of the Russian Tsar Nicholas I and his wife Alexandra Fyodorovna , a sister of the future German Emperor Wilhelm I, Tsarina Mother Maria Fyodorovna , the sister of King Frederick of Württemberg , was the bride's grandmother. On July 13, 1846, the wedding took place in great splendor in Peterhof Palace near Saint Petersburg . On September 23, the young couple moved into Stuttgart to the great cheer of the population. The couple's residence from 1854 until Charles took office in 1864 was the Kronprinzenpalais, built in 1846/50 at state expense, on Königstraße, at the corner of Schloßplatz (demolished in 1962/63). For their summer residence, the Crown Prince couple chose the Villa Berg , designed according to their own ideas , one of the first neo-Renaissance buildings in Germany.

The marriage remained childless. In 1863 the Crown Princess therefore adopted her niece Wera , a daughter of Grand Duke Constantine of Russia , as a child. 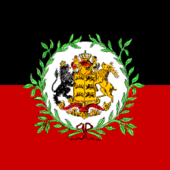 After the death of his father on June 25, 1864, Karl was king of Württemberg and enthroned on July 12, 1864. Thinking more liberally than his father, he replaced Executive Minister Joseph von Linden with Karl von Varnbuler , restored freedom of the press and freedom of association on December 24, 1864 , and on March 26, 1868 universal, equal, direct and secret suffrage was granted introduced for the people's deputies of the Second Chamber.

Because of the alliance, Württemberg took part in the Franco-German War from July 1870. At the end of October 1870 the king retired to Friedrichshafen . In November, Württemberg signed one of the November treaties. As a result, the state joined the North German Confederation , which came into force on January 1, 1871. This state was renamed the German Empire.

At the imperial proclamation in Versailles on January 18, 1871, his 25th engagement day to Olga, he was represented by his cousin August von Württemberg . The king also showed a tendency to withdraw into private life - sometimes outside his country, and later sometimes to Nice . In doing so, he neglected the obligations incumbent on him as a constitutional body - up to 800 unsigned documents are said to have accumulated in one case. This was on the one hand a nuisance for the administration, but on the other hand it was also very convenient for the government, as it was able to rule largely without interference from the king.

Since 1871, Württemberg was a federal state of the German Empire ; the consequence was a considerable restriction of the Württemberg sovereignty. Württemberg lost its previous international position, but gained greater security both internally and externally. Postal and telegraph systems, financial sovereignty, cultural maintenance and railway administration remained in Württemberg hands, and the Kingdom of Württemberg also had its own military administration (the so-called Württemberg reserve rights ).

A first “intimate” long-term “friendship” with a man connected Karl with his adjutant general Freiherr Wilhelm von Spitzemberg . Another friend was Richard Jackson of Cincinnati, Secretary of the United States Consulate. In 1883 Karl met the 30-year-old American Charles Woodcock , a former congregational preacher and reader of Queen Olga, and his friend, Donald Hendry. Woodcock became the king's new friend. The king also appeared in public with his friend, wearing the same clothes on trips together. The king made his lover chamberlain, then baron Woodcock-Savage, and left him a handsome fortune. It was less the homosexuality of the king than the fact that Woodcock used his position to exert a significant influence on the king's personal decisions that turned into a scandal. This was not hidden from the press, and together with the political establishment , headed by Prime Minister Hermann von Mittnacht , the king was put under massive pressure, so that he had to give up Woodcock. In 1889 Karl found a new friend in the machine master of the court theater, Wilhelm George. This relationship lasted until the king's death two years later.

On October 3, 1891, King Karl returned to Stuttgart from a stay in Bebenhausen Castle, terminally ill, and died here on October 6. A year later, on October 30, 1892, Queen Olga died and was buried next to her husband in the crypt of the castle church in the old castle .