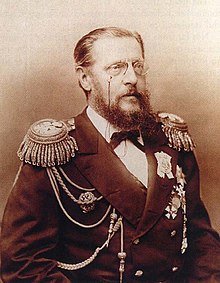 Constantine's upbringing was subject to the strict supervision of Friedrich von Lütke . Regardless of his rank as Grand Duke , he received naval training like all other cadets and thus had an insight into normal Russian everyday life. In addition to Russian, he also spoke fluent English, German and French.

On the side of the Austrians, he was involved as a young officer in the suppression of the uprising in Hungary in 1849 and received the St. George's Cross, 4th class. A year later he was included in the government. In 1855 his brother, Alexander II, became the Russian tsar and Constantine was responsible for all naval affairs . He had a very intimate relationship with his brother and supported him in his will to reform, especially with the guarantee of the constitution of 1881.

In 1862 he became Viceroy ( Namiestnik ) of Poland and was wounded in an assassination attempt on the second day after his arrival. Despite his efforts to protect the Polish population, the Poles revolted against Russian rule and Constantine imposed martial law.

After returning to Russia, he was president of the government for 16 years and resigned when his nephew Alexander III. who found his uncle too liberal repealed the constitution. He spent the last years of his life in the Crimea. In 1889 he suffered a stroke and died around two years later.

Although Konstantin admired his wife very much, in the early 1870s he began a relationship with a ballerina named Anna Vasiljewna Kuznetsova. She also gave him a number of children, of which only two girls survived childhood.