Queen Olga in a painting by Georgios Iakovidis from 1915

Olga was the daughter of Grand Duke Konstantin Nikolajewitsch Romanow , a brother of Tsar Alexander II , and Alexandra Jossifowna , a daughter of Duke Joseph von Sachsen-Altenburg . In 1863 Georg made a trip to Russia to thank Tsar Alexander II for supporting the election campaign for the Greek crown . There the two met for the first time. Olga was twelve years old at the time.

In 1867 Georg returned to Russia, this time to visit his sister Dagmar , who had married the Tsarevich Alexander the year before. Olga and Georg fell in love and got married on October 15th July. / October 27, 1867 greg. . Eight children emerged from the connection:

Queen of the Greeks

Through her charitable commitment, including the foundation of several hospitals, Olga made herself very popular with the people. When she visited wounded soldiers during the Greco-Turkish War , she realized that they could not read the Bible. The Bibles in use in Greece at that time were versions of the ancient Greek original text ( Koine ), which ordinary people could not understand sufficiently. Olga then made sure that the Bible was translated into modern Greek so that everyone could read it.

In November 1901, Olga published her own translation of the New Testament without church permission, and other modern Greek translations followed. This divided the professional world: the modern form of language was perceived by many as "impure". Church, theologians and the press criticized it as unworthy of the Bible translation. 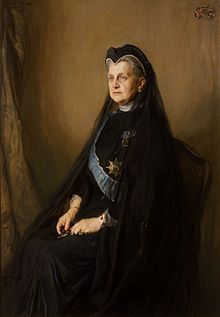 The controversy sparked rioting from students at Athens University who demanded the excommunication of all those involved in the translations. Eventually the protests led to the overthrow of Theotokis government and the resignation of the Archbishop of Athens. The clashes between demonstrators and the police left eight dead and at least 70 injured. In December of the same year, all translations were withdrawn from circulation and a prison sentence was threatened for publishing translations of the Bible without church permission. All of this was a severe blow to Queen Olga.

During the First Balkan War , King George I was assassinated by Alexander Schinas in Thessaloniki in 1913 . Her eldest son then ascended the throne as King Constantine I. He was forced to abdicate in 1917 and left the country with Crown Prince Georg, while his second-born son ascended the Greek throne as Alexander I. 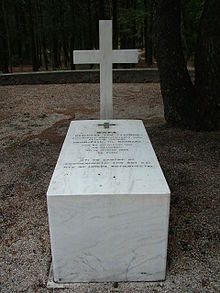 After Alexander I died of blood poisoning from a monkey bite on October 25, 1920 , the Greek parliament offered the crown to his younger brother Paul . He refused on the grounds that both his father Konstantin and his older brother Georg were still alive. Thereupon Queen Olga exercised the reign until her son Constantine I could return to the throne. After he was again deposed in 1922, she went into exile with him in Italy. Olga died in Rome in 1926 and was buried in the Greek Orthodox Church in Florence . After the monarchy was restored, her body was transferred to Greece and buried in the cemetery of the Greek royal family in Tatoi near Athens.