Prince Andrew of Greece and Denmark

Prince Andreas was the fourth son of eight children of the Greek King Georg I (1845-1913) and his wife, Grand Duchess Olga Konstantinowna Romanowa (1851-1926), daughter of the Russian Grand Duke Konstantin Nikolajewitsch Romanow and Princess Alexandra of Saxony-Altenburg . He was a great-grandson of Tsar Nicholas I and grandson of the Danish King Christian IX. , the "father-in-law of Europe". Andreas was fluent in Greek , German , English , Danish , Russian , French and Italian . The siblings spoke Greek among themselves, but English with their parents. He studied in Germany at the Ruprecht-Karls-Universität Heidelberg .

On October 7, 1903 married Prince Andrew in Darmstadt Princess Alice of Battenberg (1885-1969), daughter of Louis Alexander of Battenberg (1854-1921) and his wife Princess Victoria of Hesse and by Rhine (1863-1950), a granddaughter of Queen Victoria . The wedding in Darmstadt took place three times: first the civil wedding in the Altes Palais, then the Protestant wedding in the castle church and finally the orthodox one in the Russian chapel on the Mathildenhöhe . At first the couple lived in Athens and later in the Villa Mon Repos , the summer residence of the Greek royal family on the island of Corfu .

As a result of the lost Greco-Turkish War , a coup took place. Andrew's brother, King Constantine I of Greece , had to abdicate. Prince Andreas was demoted and banished on December 2, 1922 for insubordination and treason during the Turkey campaign . In contrast to the co-defendant Prime Minister Dimitrios Gounaris and high officers, Andreas escaped the death sentence because of the massive influence of the British crown.

After the military coup , the family went into exile together. His wife stayed with the children in Paris , while he - inclined to women and alcohol - moved into an apartment in Monaco with his long-time lover Andrée Countess de La Bigne. In the 1930s, his wife showed signs of schizophrenia , she lived in a dream world. Finally, under pressure from his brother-in-law, Louis Mountbatten , she was admitted to a psychiatric clinic in Switzerland because she was no longer able to distinguish between reality and appearance. 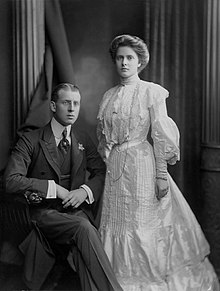 Prince Andrew of Greece with his wife Alice in 1903

Prince Andreas died of a heart attack in 1944 and was buried in the Royal Cemetery of Tatoi .