Viktoria was the eldest of seven children of the penultimate Hessian Grand Duke Ludwig IV and his wife Princess Alice of Great Britain and Ireland . She was born on Easter Sunday, 1863, at Windsor Castle in the presence of Queen Victoria, and was baptized a few weeks later. Her godparents were Princess Mary Adelaide of Cambridge , Ludwig III. , Grand Duke of Hesse, the Prince of Wales and later Edward VII . and Prince Heinrich of Hessen-Darmstadt .

Princess Victoria as a child, painting by August Noack (1870)

Viktoria spent the first three years of childhood in Bessungen , a then still independent suburb of Darmstadt , until the family moved to the New Palais in Darmstadt. The young princess was brought up very strictly, to the point of simplicity. This included religious education, languages, history, music, and courtly conversation. In her youth, Victoria was described as a tomboy . Her mother noticed her thirst for knowledge and intelligence early on, which she encouraged accordingly. Victoria had a good general education and was an avid reader throughout her life. She shared a room with her younger sister Elisabeth , called "Ella".

In 1866 she was sent to England with her sister Elisabeth during the German War . During the Franco-Prussian War in 1870, military hospitals were built in the palace gardens in Darmstadt . Together with her mother, Grand Duchess Alice, she helped out in soup kitchens. She later remembered the cold of winter and that she burned her arm with hot soup.

In 1873, her brother Friedrich “Frittie” (1870–1873), who was only two years old, died of internal bleeding after a fall from a window. He suffered from hemophilia .

Diphtheria was rampant in Darmstadt in 1878 . Viktoria and her siblings became infected and her mother nursed them back to health. Only Elisabeth escaped the disease because she was staying with her grandparents. Viktoria's youngest sister Marie died of the disease, as did her mother, who was only thirty-five years old.

As the eldest child, Viktoria then became her father's pillar and temporarily took on the role of mother for her younger siblings. She later wrote: " The death of my mother was an irreparable loss ... My childhood ended with her death because I became the oldest and most responsible ." After this terrible loss, most of the children grew up with their grandmother, Queen Victoria, in Great Britain.

At one of the many family get-togethers of the widespread relatives, she met her cousin Prince Ludwig von Battenberg , the eldest son of Prince Alexander von Hessen-Darmstadt and Countess Julia Hauke . Ludwig had taken British citizenship and was an officer in the Royal Navy . In the winter of 1882 they met again in Darmstadt and became engaged in the summer of the following year.

Since Victoria's uncle Prince Leopold, 1st Duke of Albany died shortly before the wedding , the wedding had to be postponed for the time being. The couple finally married on April 30, 1884 in Darmstadt. Grand Duke Ludwig was initially against marriage. In his opinion, the groom was poorly wealthy and had only got his money's eye, since his daughter and her husband would live in Great Britain after marriage. However, to his displeasure, Victoria defied fatherly authority and married out of love. Curiously, Grand Duke Ludwig married his lover Alexandrine von Hutten-Czapska on the same day . However, the marriage was annulled under pressure from relatives in the same year.

Over the next sixteen years Viktoria and Ludwig became parents of four children:

The family lived primarily in the UK and owned houses in Chichester , Sussex and Walton-on-Thames . During their stays in Germany, they lived in Heiligenberg Castle in Jugenheim . Because of her husband's work, Victoria often wandered around with the children between the various British seas and spent a few winters in Malta . In 1887 Viktoria fell ill with typhus and was cared for by Ludwig. In June of the same year she was sufficiently recovered that she attended the celebrations for Queen Victoria's Golden Jubilee in London.

Viktoria and Ludwig with their children Alice, Louise, Louis and George (1902)

Victoria, who was very interested in geology and archeology , acquired a great deal of knowledge in these areas over time. She drew geological maps of Malta and took part in excavations both there and in Germany. She recorded in leather-bound volumes the books she had read, which covered a wide range of subjects, including socialist philosophy. She sometimes taught her children herself and repeatedly introduced them to the latest technical achievements of the time. Her youngest son Louis said in 1968 that she was " a walking encyclopedia. She has accumulated knowledge of all kinds of subjects all her life, and she had the great gift of making it all interesting when she taught me ." He also added that she was one of the most open members of the royal family and completely free from prejudice about politics. In 1906 she took part in flights in an airship and in a biplane .

Until 1914 Viktoria regularly visited her sisters in Russia and Germany. Alix and Elisabeth were both married to members of the Russian tsarist family, Alix to Tsar Nicholas II and Elisabeth to Grand Duke Sergei Alexandrovich Romanov . The third sister Irene was married to the imperial brother Prince Heinrich of Prussia . Between July and August 1914, she and her daughter Louise visited their sister Alix and her family in Russia for the last time. When the war began, Viktoria and Louise traveled from Yekaterinburg to Saint Petersburg . From there began a multi-week odyssey through Tornio to Stockholm . They went back to Great Britain on the last ship from Bergen , Norway.

From 1912 to 1914, Prince Ludwig served as First Sea Lord , the highest position in the British Navy . With the outbreak of the First World War and due to his German origins, he had to give up this title and resigned. She accused the government of her husband's forced resignation. She distrusted the First Lord of the Admiralty , Winston Churchill , whom she considered unreliable. During the war years, the couple lived in the Kent House on the Isle of Wight , which Victoria had received from her aunt Louise, Duchess of Argyll .

Since her marriage she had the title of Princess von Battenberg. Due to the anti-German mood in Great Britain in 1917, King George V caused all members of the royal family to renounce their German titles. The name was changed from Battenberg to Mountbatten. At the same time, her husband was raised to Marquess of Milford Haven and Victoria to Marchioness of Milford Haven.

In 1918, her younger sisters Elisabeth and Alix, her brother-in-law Nicholas II, their nieces, their nephew and other members of the Russian ruling family were murdered by the Bolsheviks . For a long time the family did not know the exact fate of the relatives. In 1921 Elisabeth's body reached Jerusalem after a long odyssey and was buried there in the presence of Victoria.

Shortly after returning from Jerusalem, her husband Ludwig died in London in September 1921. When Ludwig found her at the Naval and Military Club in Piccadilly , he complained about not feeling well. Viktoria persuaded him to take a room in the club annex for the night, and a doctor he had consulted prescribed a medication, which Viktoria got from a nearby pharmacy. When she returned, Ludwig was already dead. 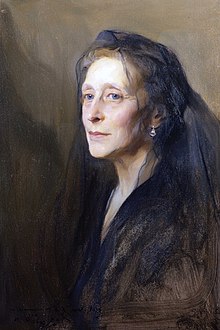 In her widowhood, Viktoria moved into an apartment in Kensington Palace . There she became, according to her biographer, "a central matriarchal figure in the life of the surviving European royal families". Some personal blows of fate followed. In 1930 the eldest daughter Alice was diagnosed as schizophrenic . Viktoria then took care of the upbringing of her grandson Philip after his parents separated and Alice was admitted to a sanatorium in Switzerland. Her brother Ernst Ludwig died in 1937 . In the same year, Viktoria's granddaughter Cecilia and her husband Georg Donatus , their two sons and Grand Duchess Eleonore died in a plane crash in Ostend , Belgium. A year later, the eldest son George died of bone cancer .

During World War II , Kensington Palace was bombed, so Victoria temporarily moved to Windsor Castle and stayed with the family of King George VI. lived. She spent a lot of time reading and was in constant concern for her children. Contact with daughter Alice, who was in occupied Greece during the war, was broken for four years.

In 1947, her son Louis was offered the office of Viceroy of India , which Victoria strictly refused because she saw Louis' future role as too dangerous and difficult. In the same year she attended the wedding of her grandson Philip to the British heir to the throne Elizabeth and a year later she attended the baptism of her great-grandson Prince Charles at Buckingham Palace .

In September 1950 fell ill during a visit Victoria with her son Louis on his country estate Broadlands in Romsey at a bronchitis . She said it was better to die at home and returned to London at Kensington Palace. There she died on September 24, 1950 at the age of 87. She was buried next to her husband in the graveyard of St Mildred's Church in Whippingham on the Isle of Wight .