Grand Duke Ludwig IV of Hesse and the Rhine

Ludwig was the eldest son of Prince Karl of Hesse and the Rhine (1809–1877) from his marriage to Elisabeth (1815–1885), daughter of Prince Wilhelm of Prussia . Ludwig's father was the younger brother of Grand Duke Ludwig III. who, without descendants, had designated his nephew as heir after Prince Karl had refused to succeed him for health reasons.

Together with his younger brother Heinrich , he began his military training in 1854 and two years later the brothers began studying at the universities in Göttingen and Gießen . The mother decided that her sons would enter Prussian military service, even though Ludwig's uncle Alexander offered Austrian military service. In the Prussian service he got to know the later Prussian Crown Prince couple, was invited to England and introduced to the sister of the Prussian Crown Princess. 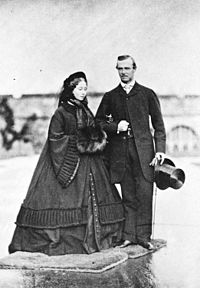 Ludwig IV of Hesse and his then fiancée Alice of Great Britain and Ireland, December 1860 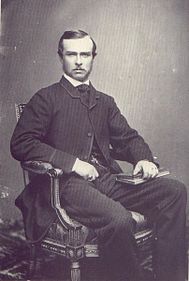 Ludwig married on July 1, 1862 in Osborne House on the Isle of Wight Princess Alice of Great Britain and Ireland (1843-1878), the second eldest daughter of Queen Victoria . Alice was the sister of Princess Victoria , making Ludwig brother-in-law of Crown Prince Friedrich , who later became Emperor of Germany, with whom he had been friends since his youth in the Prussian military. With Crown Prince Friedrich Wilhelm he made an extensive trip to the Orient in 1869 to open the Suez Canal .

The influence of his wife liberalized the Darmstadt court. The New Palais in Darmstadt was built with English funds .

After the German War , in which Ludwig participated as commander of the 2nd Hessian Infantry Brigade, the Hereditary Grand Duke confessed himself against Ludwig III. and his Prime Minister von Dalwigk on a pro-Prussian direction on the German question . Ludwig threatened to resign from the command of the Hessian army division and thus implemented the military reorganization. In the Franco-Prussian War , Ludwig fought at Gravelotte , before Metz and at Orléans as commander of the Hessian division .

After the death of his uncle, Ludwig became Grand Duke of Hesse and the Rhine in 1877. Grand Duchess Alice died a year later in 1878, just four weeks after her youngest daughter Marie, like her of diphtheria . The affairs of state were conducted under Ludwig IV. Julius Rinck von Starck and Jakob Finger as Prime Minister in accordance with the liberal principles of the Grand Duke and the liberal majority in the Landtag.

On April 30, 1884 he married again in a morganatic marriage with Alexandrine von Hutten-Czapska (1854-1941), daughter of Count Adam von Hutten-Czapski, who was raised on the occasion of the marriage to Countess von Romrod . The marriage was annulled in the same year under pressure from the princely relatives.

The close dynastic ties with Prussia, Great Britain and Russia gave the Grand Ducal House of Hesse a special position, but had little political impact.

Ludwig IV died of a stroke on March 13, 1892. In 1910 his remains were transferred to the newly completed New Mausoleum of the grand ducal family in the Rosenhöhe Park in Darmstadt.

Ludwig with his mother-in-law Queen Victoria and his children shortly after the death of his wife, February 1879

A monument in honor of Ludwig in the form of an obelisk was erected on Ludwigsplatz in Worms in 1895 , which was designed by the city architect Karl Hofmann . Another monument to Ludwig is in Bingen am Rhein and an equestrian statue of the Grand Duke erected in 1898 is on Friedensplatz in Darmstadt.

Note: What is striking about this family tree is the fact that his grandparents and great-grandparents had many inter-family marriages. That is why the Hessen-Darmstadt company is represented there disproportionately often.