Alice of Great Britain and Ireland

Alice was the second daughter of British Queen Victoria (1819–1901) and her husband, Prince Consort Albert of Saxe-Coburg and Gotha (1819–1861), the second son of the reigning Duke Ernst I and Princess Luise of Saxe-Gotha Altenburg . Her maternal grandfather was Edward Augustus, Duke of Kent and Strathearn , the fourth son of British King George III. Alice got her name in honor of Queen Victoria's First Prime Minister William Lamb, 2nd Viscount Melbourne , who once told Victoria that this was his favorite name for a girl. 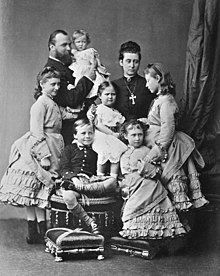 Alice with her husband and children, 1876

Princess Alice married on July 1, 1862 in Osborne House on the Isle of Wight, the later Grand Duke Ludwig IV of Hesse and Rhine (1837-1892), the eldest son of Prince Karl Wilhelm Ludwig of Hesse and Princess Elisabeth of Prussia.

The marriage had seven children:

From 1863 Alice was committed to public health care and in particular to improving the hygienic conditions for women who have recently given birth . In Darmstadt, in 1867, together with Luise Büchner , she founded the health and poor care association (Alice Women's Association) named after her. Grand Duchess Alice and Luise Büchner developed the profession of nurse without religious affiliation, and the Alice Association for Nursing was created, from which the free Alice Sisterhood emerged. With the active participation of the princess, the Alice-Hospital Darmstadt was built after the first practical tests in the hospitals of the wars of 1866 and 1870/71 . In 1872, at Alice's invitation, the first “General Assembly of German Women’s and Employment Associations” took place, which included women’s gainful employment in the post office, the railroad and the telegraph service.

In 1873, Alice's youngest son died of internal bleeding ( haemophilia ) after falling out of a window . That same year she translated the treatise On the Homes of the London Poor by Octavia Hill into German.

After the native Darmstadt painter Paul Weber was recruited from the USA to Germany as a court painter, Alice took painting lessons from him. She could no longer put her plan to establish an artists' colony into practice herself. Her son, Grand Duke Ernst Ludwig, did this with the Mathildenhöhe .

In November 1878 the children, with the exception of Ella , contracted the infectious disease diphtheria . Alice devotedly cared for the suffering children, infected herself with the disease and died almost a month after her youngest daughter Marie on December 14, 1878, the anniversary of her father's death, Prince Consort Albert, in Darmstadt. In 1910, the remains of Grand Duchess Alice and Princess Marie were transferred to the newly completed New Mausoleum of the Grand Ducal Family in the Rosenhöhe Park in Darmstadt.

In 1858, Princess Alice received a coat of arms that reflected her position as the daughter of Queen Victoria and her husband Albert of Saxe-Coburg and Gotha and, in addition to the royal British coat of arms, also showed the coat of arms of Saxony as a heart shield .

Commons : Alice of the United Kingdom  - Collection of images, videos and audio files