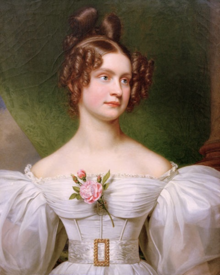 Princess Mathilde Karoline Friederike Wilhelmine Charlotte of Bavaria (born August 30, 1813 in Augsburg , † May 25, 1862 in Darmstadt ) was by marriage Grand Duchess of Hesse and the Rhine.

Mathilde was born as the daughter of King Ludwig I of Bavaria and his wife, Princess Therese Charlotte Luise von Sachsen-Hildburghausen .

The Mathildenhöhe , the Mathildenplatz in Darmstadt and the Mathilde Terrace on the Kästrich in Mainz were named after her. The name of Offenbach-Mathildenviertel also goes back to them. Mathilde died in Darmstadt in 1862 at the age of 48. Her tomb is in the Ludwig Church .