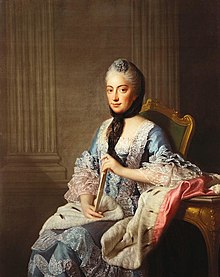 On February 5, 1735, she married Karl , Duke of Mecklenburg (1708–1752) in Eisfeld , with whom she resided under modest circumstances in Mirow . The marriage made out of inclination turned out to be happy. The court of the couple ensured an upswing for Mirow , which was almost completely destroyed by a fire in 1747. The couple's children were raised at home, with Elisabeth Albertine, who has been described as pious and astute, having a significant stake.

After the death of her husband and his older brother in 1752, her 14-year-old son Adolf Friedrich IV became the (ruling) duke of the Mecklenburg-Strelitz region , and Elisabeth Albertine moved with the children to Neustrelitz. During the time when Adolf Friedrich took office in December 1752, Elisabeth Albertine tried for a few weeks to run government affairs for her son, because her husband had appointed her to be the guardian of her children in his will, which was confirmed by the emperor. The guardianship also claimed Duke Christian Ludwig II of Mecklenburg [-Schwerin], who had troops deployed and thus forced the oath of homage from most of the Strelitz government officials. In the escalating guardianship dispute, there was no question of actual reign for either party. Adolf Friedrich IV had been brought to Greifswald for security . Elisabeth Albertine lodged a complaint with the Reichshofrat. Finally she managed to get the emperor to declare her son of age prematurely.

Elisabeth Albertine continued to advise her son on political issues. In July 1755, together with her son, she ratified the Land Constitutional Constitutional Comparison for her minor children .

Elisabeth Albertine was considered a particularly careful princess. She died in 1761 two months before her daughter (Sophie) Charlotte became Queen of England; she had negotiated their marriage contract on her deathbed. With her death, the royal court in Mirow ended, where the family had regularly spent the summer. Elisabeth Albertine found her final resting place in the royal crypt in Mirow. Your coffin has not been preserved.

Their marriage resulted in ten children, six of whom reached adulthood: