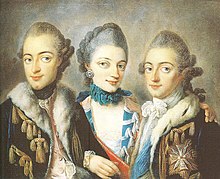 Christiane with her brothers Ernst (left) and Adolf Friedrich (1766)

Christiane Duchess of Mecklenburg (-Strelitz), full name Christiane / a Sophie / a Albertine / a , also Christina , commonly known as Princess Christel (* December 6, 1735 in Mirow ; † August 31, 1794 in Neustrelitz ) was a member of the ducal House of Mecklenburg-Strelitz .

Together with her siblings she received a comprehensive upbringing in Mirow, among others by Friderike Elisabeth von Grabow and Gottlob Burchard Genzmer . She is said to have been fluent in Latin, Greek and French and preferred to read writers from classical antiquity in the original language.

During his grand tour through Europe in 1761, which was also the bridal show for George III. served, John Ker , 3rd Duke of Roxburghe fell in love with her. Her younger sister Charlotte's marriage to King George III. made this connection however protocol-wise impossible; both remained unmarried all their lives.

Christiane lived with her unmarried brother Adolf Friedrich IV. In Neustrelitz and took on representative tasks. In 1767 Thomas Nugent met her here; later she became a canon in Herford Abbey , but kept her residence in Neustrelitz. Since January 13, 1766 she was Lady of the Russian Order of Saint Catherine , 1st class.

She died shortly after her brother Adolf Friedrich and was buried in the royal crypt in Mirow .

Fritz Reuter set her a literary monument as Princess Christel or Christel-Swester in Dörchläuchting (1866).