The title of this article is ambiguous. Further meanings are listed under Mirow (disambiguation) .

Teachers' college, harbor and Mirower See on a picture postcard from 1899

Mirow Castle on the Castle Island in the Mirower See

The city, which is embedded in several lakes and waterways, is a state-approved resort and one of the main places in the Neustrelitzer Kleinseenland holiday area of the Mecklenburg Lake District .

Naturally , Mirow is part of the Neustrelitzer Kleinseenland in the Mecklenburg Lake District. The town is located at the south end of the Mirower lake , via a chain of lakes, rivers and canals with the Müritz and the Mirower channel , the part of the Müritz Havel waterway , with the Havel is connected. In the municipality there are some larger lakes such as the Labussee , the Vilzsee , the Rätzsee as well as the Granzower Möschen and the Zotzensee .

The following districts belong to the city of Mirow:

The name of the Slavic village Mirov originated from an old Polish personal name and means something like peace or quiet . The name changed only slightly to Mirowe or Myrow (e).

The history as a German place goes back to a settlement of the Order of St. John , to which Prince Heinrich Borwin II. Donated 60 Hufen land in 1226 in the "Land Turne" (area southwest of the Müritz)  . In the confirmation of this foundation by Borwin's sons, a village of Mirow is already mentioned. By 1242 at the latest, the settlement on the shores of the lake had developed into a commandery . In the centuries that followed, the order's property grew steadily.

Amid ongoing disputes with the Lord masters of St. John in Sonnenburg the Mecklenburg dukes gained in the course of the 16th century greater impact on the occupation of the Coming and the appointment of Komturen . After the last Mirower Komtur died in 1541, the Commandery was administered only by Protestant administrators, most of whom came from the Mecklenburg ducal house. In 1648 the commandery was finally secularized and assigned to the (partial) duchy of Mecklenburg-Schwerin as compensation for other territorial losses . The Hamburg settlement brought Mirow to the (partial) duchy of Mecklenburg-Strelitz in 1701 . Large parts of the order property of the commandery had meanwhile been converted into a ducal Mecklenburg administrative office with its seat in Mirow.

Since the transfer of the Mirow order property to the ducal house of Mecklenburg at the end of the 16th century, the commandery house on the Mirow castle island has been used repeatedly as a princely residence. The domanial office of Mirow had supply functions for ducal widows or apanaged branch lines of the Mecklenburg dynasty. Duke Johann Georg, for example, a later son of Adolf Friedrich I , received Mirow as apanage in the second half of the 17th century. From 1707 to 1712 a new castle was built according to plans by Joachim Bormann, today's Upper Castle. Contrary to popular belief, the major fire of 1742 destroyed the last building complex of the Commandery , but not the castle. This was expanded from 1748 to the 1760s and some of it was refurbished. The Upper Castle has been extensively restored in recent years and opened to the public as a museum on June 7, 2014.

While the Mirower Hof had developed into an important intellectual and intellectual center of Mecklenburg-Strelitz in the 1740s, the princely court in Mirow gradually ceased with the change of government in 1752/53 and finally arrived in 1761 with the death of the Dowager Duchess Elisabeth Albertine The End. Since then, Schloss Mirow has led a quiet, dreamy existence and only briefly awakened to new life when a member of the Strelitz ruling house had died and was buried in the royal crypt attached to the church in 1704 .

In the secondary castle (the so-called lower castle ), which was built outside the old castle district from 1735 to 1737 and initially remained unfinished after renovations in the 1760s, the Grand Ducal Teachers' College of Mecklenburg-Strelitz was opened in 1820, which until the 1920s almost 800 Trained primary school teachers.

At the end of the 18th century there were Jews living in the village. Around 1800 they built a Jewish cemetery (on Lärzer Straße, opposite house no. 5), which was completely destroyed during the Nazi era . A memorial stone was placed there during the GDR era.

The place Mirow itself kept for a long time the status of a market town, a village with certain special privileges, but without local self-government. That is why Mirow lacks typical urban buildings from old times, such as a spacious market square or a representative town hall. Only after the end of the monarchy, when the municipality type Flecken was abolished, Mirow received city ​​rights in 1919 . The city center has been partially redeveloped since 1991 as part of urban development funding.

The increase in the number of inhabitants in 2015 is due to the incorporation of Roggentin in 2014.

The city council of Mirow consists of 14 members and the mayor. Since the local elections on May 26, 2019, it has been composed as follows:

Tesch was confirmed in the mayoral election on May 26, 2019 with 74.0 percent of the valid votes.

The city does not have an officially approved flag . 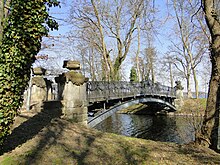 Bridge from the Castle Island to the Love Island 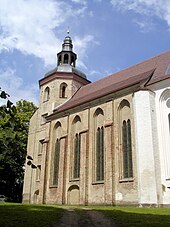 Mirow is located on the B 198 between the Röbel / Müritz motorway junction 27 km away on the A 19 ( Berlin - Rostock ) and Neustrelitz . Due to the high traffic load, a bypass has been planned since the 1990s , which has still not been implemented (as of 2020).

The Mirow train station is the end of the Neustrelitz – Mirow railway line (“Kleinseenbahn”). It is served by the Hanseatic Railway every two hours during the day. Passenger traffic on the Mirow – Rechlin railway was stopped in 1967.

The connection to other places in the area is ensured with buses of the MVVG and ORP .

The football club FSV Mirow / Rechlin was created in 2004 from a merger of Mirower SV and Rechliner SV. He plays in the season III Mecklenburg-Vorpommern regional class in the 2019/20 season.

Cities and communities in the Mecklenburg Lake District