Ribnitz-Damgarten is a town in the district of Vorpommern-Rügen in Mecklenburg-Vorpommern (Germany). It is also the administrative seat of the office of the same name , to which three other municipalities belong. The city is one of the 18 middle-class centers in the country and has had the amber city in front of its name since 2009.

Historically, the Ribnitz district belongs to Mecklenburg , Damgarten to Western Pomerania , in 1950 they were united into one town.

The city is located between the Hanseatic cities of Rostock and Stralsund at the mouth of the Recknitz River in the Ribnitzer See (southern part of the Saaler Bodden ). East of the Recknitz in Western Pomerania is Damgarten and west of the river, in Mecklenburg, is Ribnitz.

Ribnitz-Damgarten consists of the districts Ribnitz and Damgarten and the following districts:

The result is Ribnitz from the village Rybanis ( Ryba means "fish"), which in the marshy Recknitzniederung was. The transition over the Recknitz is also called the Mecklenburg Pass . On the Ribnitz side, the pass farm is located directly on the river .

To protect the important river crossing over the Recknitz, the Mecklenburg princes had a castle built near the river around 1200, which later became the nucleus of the Ribnitz town center. Until the 14th century, the place belonged to the rulership of Rostock , then to the principality, and later to the (Grand) Duchy of Mecklenburg.

Another economic upswing in the city of Ribnitz began in 1934 with the construction of production facilities that were important for the war effort, such as Walther-Bachmann-Flugzeugbau KG.

The town of Damgarten arose from a border castle and the neighboring village of "Damgor" ("Dam" means "oak"), which lay east of the swampy Recknitz lowland. Prince Jaromar II of Rügen is considered to be the founder of Damgarten . The transition over the Recknitz to Ribnitz in Mecklenburg was also called the Mecklenburg Pass . Damgarten received the Luebian law in 1258 from Rügen prince Jaromar II.

Damgarten has had a rail connection on the Stralsund – Rostock railway line since 1888 . In 1934 an air base near Pütnitz was built near Damgarten . The airfield Pütnitz was after the Second World War, one of the most important locations in the GDR stationed Soviet air forces . Until 1991 the 16th fighter division of the group of the Soviet armed forces in Germany was stationed in Damgarten.

The twin town Ribnitz-Damgarten was created on July 1, 1950 by merging the two towns Ribnitz (in Mecklenburg ) and Damgarten (in Pomerania ). Both city councils had spoken out against the merger of the cities. The Borg parish joined them on the same day. The rulers at the time wanted to erase any memory of Pomerania and the associated historical Mecklenburg-Pomerania border. Officially, the need for a larger district town for the Ribnitz-Damgarten district formed in 1952 in the GDR district of Rostock was put forward.

The Recknitz forms the natural border between Mecklenburg and Pomerania . The two districts of Ribnitz and Damgarten are separated by the wide swampy river valley. The transition over the Recknitz is also called the Mecklenburg Pass . On the Mecklenburg side, the pass farm is located directly on the river .

After the political change, the historic town centers of Ribnitz with the monastery and of Damgarten were fundamentally renovated as part of urban development funding.

West tower of the Marienkirche in Ribnitz

Other churches represented in Ribnitz-Damgarten are the Roman Catholic Maria-Hilfe der Christisten St. Klara and the New Apostolic parish Ribnitz.

Since the local elections on May 26, 2019 , the 25 city representatives are distributed as follows:

The CDU and FDP as well as the SPD and the Greens have each formed a parliamentary group.

The coat of arms was approved by the Ministry of the Interior on January 27, 1993 and registered under the number 64 of the coat of arms of Mecklenburg-Western Pomerania.

Blazon : “Split; in front in silver a crowned bust of a man with gold-trimmed blue cloak, in red clad, gold-haired and crowned, behind in blue an upright, red-tongued golden griffin. "

The coat of arms was designed by Frank Rose from Ribnitz-Damgarten .

On the heraldic right side of the coat of arms the Damgarten city founder Jaromar II of Rügen can be seen. The griffin on the left is the heraldic animal of the princes of the historical rulership of Rostock , to which Ribnitz belonged. Later one had a coat of arms with the Mecklenburg bull's head, flanked by two fish, which indicates the Slavic name Rybanis - fish place.

Ribnitz-Damgarten has maintained a partnership with the Lower Saxony city of Buxtehude since 1990 and with the Polish city of Sławno (formerly Schlawe ) in the West Pomeranian Voivodeship since 2008 .

Half-timbered house in the old town of Ribnitz

The so-called Moischenstein is located in the reed belt on the bank of the southern Saaler Bodden. The corridor and legal monument from the 13th century was the boundary stone between Mecklenburg and Pomerania. Today the stone still has a legal function for the town of Ribnitz-Damgarten with regard to the scope of their fishing rights in the western part of the Saaler Bodden. Next to the now largely sunken stone monument, the surface of which is heart-shaped, there is a raised stand and an imitation border post. 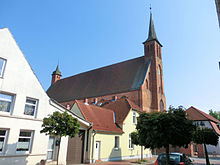 Since April 28, 2009, the city has been officially called "Amber City", primarily because of the former VEB Ostseeschmuck located in the Ribnitz district , the German Amber Museum and the amber foam factory in the Damgarten district. In addition to numerous shops that offer amber products, the nickname "amber city" can also be seen as a regional reference to the Baltic Sea, which is about 10 km away . The city is also known as the “gateway to Fischland”, as it is the last middle center on the way to the Fischland-Darß-Zingst peninsula in the Baltic Sea . Until 1948 there was the patented " Fischland-Schmuck " in Ribnitz . It is silver work decorated with marine motifs (fish, starfish, etc.), into which selected, polished amber is inserted. The company was nationalized in 1948, but production and trademark rights were resumed in Lübeck , later Travemünde . Since then, the jewelry from the Baltic Sea coast has been called Baltic Sea jewelry.

Ribnitz-Damgarten has held the title of “state-approved resort” since 2013.

Ribnitz-Damgarten is on the Rostock - Stralsund section of the B 105 federal road . Damgarten and, since November 2nd, 2004 also Ribnitz, are bypassed on bypasses. The state roads L 22 from Graal-Müritz to Franzburg , the L 181 to Marlow and the L 191 to Sanitz also run through the city.

The closest motorway junctions are Sanitz on the A 20 and Rostock-Ost on the A 19 .

Between 1895 and 1965, the narrow-gauge Franzburger Kreisbahnen trains ran from Damgarten station via Barth to Stralsund. Further stations in Damgarten were at the harbor and the city forest. The former railway line parallel to the Templer Bach and in the north of Damgarten next to the Saaler Chaussee is now used as a cycle path and is still easily recognizable.

The transport company Vorpommern-Rügen organizes bus transport in the region . The city bus 201 runs daily from Damgarten to Ribnitz (Drei Linden) in inner-city public transport . The bus line is connected to the trains of Deutsche Bahn at the Ribnitz-Damgarten West station and, in addition to Damgarten, also provides access to the Boddenklinik, the Ribnitz city center and the residential areas in the west of Ribnitz. The Ribnitz-Damgarten Ost station is not served by city traffic.

Bus routes 202 to Graal-Müritz and 210 via Dierhagen , Wustrow, Ahrenshoop, Born, Wieck, Prerow, Zingst to Barth are also important . During the summer schedule (May - October), the 210 buses also carry bicycle trailers.

The Richard-Wossidlo-Gymnasium, named after the folklorist Richard Wossidlo , is located in the Damgarten district . There are also various primary, secondary and secondary schools, the vocational school in the Vorpommern-Rügen district and an adult education center. A private “education center” is of supra-local importance.

For the personalities of the former cities before their merger in 1950, see the districts.