Niepars is a municipality in the district of Vorpommern-Rügen in Mecklenburg-Western Pomerania (Germany). It is the official seat of the office of the same name , to which another seven communities belong.

Niepars is about ten kilometers west of Stralsund and 56 km east of Rostock . The Stralsund – Rostock railway line with the Martensdorf station and the 105 federal road cross the municipality. The Barth Airport is about 20 km away. About 10 km north of the Grabow is part of the Darß-Zingster Bodden chain . The south of the community borders on the river Barthe near Obermützkow . The community includes the places Buschenhagen , Duvendiek, Kummerow , Kummerow Heide, Lassentin, Martensdorf, Neu Bartelshagen , Neu Lassentin, Obermützkow, Wüstenhagen, Zansebuhr and Zühlendorf.

Niepars was first mentioned in a document in 1282. The place was planned as part of the German colonization in the east . It was founded by the local Cistercian monastery , of which only the church remained. In 1944 Niepars had about 800 inhabitants. After the Second World War , the community took in around 1,000 resettlers and grew dramatically.

Niepars was then part of the Franzburg-Barth district until 1952 and then belonged to the Stralsund district in the Rostock district until 1994 . On May 26, 2019, Kummerow and Neu Bartelshagen were incorporated.

Obermützkow was named as a subdivision of Mützkow into Ober- and Untermützkow since 1862. The Gut Mützkow was u. a. owned by the Stralsund aristocratic family Mörder (15th century, the family went out in 1730), the Göben families (around 1746), von Schlagenteuffel (around 1770) and Helms (from 1862). The preserved manor house dates from the middle of the 19th century. A baroque gate from 1746 with the Göben coat of arms has been preserved.

The coat of arms was approved by the Ministry of the Interior on March 2, 2000 and registered under the number 205 of the coat of arms of Mecklenburg-Western Pomerania.

Blazon : "In blue with the stems diagonally crossed a silver oak leaf and a stalked silver acorn, the intersection covered by a silver hammer, above between two golden ears of corn a golden label, inside a green half-wedge at the top left and a green rising half-wedge at the bottom right."

The coat of arms was designed by Michael Zapfe from Weimar . 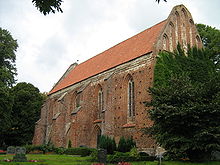 There is the Niepars Film Club in Ort with regular cinema programs. It was founded in 2015 as an initiative of the Obermützkow leisure club and the country cinema.