The title of this article is ambiguous. Further meanings are listed under Sellin (disambiguation) .

The Ostseebad Sellin is a municipality on the island of Rügen in Mecklenburg-Western Pomerania. The municipality in the district of Vorpommern-Rügen is administered by the Mönchgut-Granitz office , based in the municipality of Baabe .

The Ostseebad Sellin is located to the east of an extensive coastal forest (the Granitz ) on the connection to the Mönchgut peninsula in the southeast of Rügen. Another special feature is that Sellin is on the Baltic Sea and Selliner See , which is connected to the Greifswalder Bodden on the west side of Mönchgut via the Having bay . Along with Binz and Göhren, Sellin is one of the most important seaside resorts on Rügen.

Sellin and Baabe form a common basic center for their surroundings .

The place Sellin was first mentioned in 1295 as Zelinische beke . The name is derived from Zelino for green and bek for Bach . So it means Grünbach .

Over the centuries the village belonged to the von Putbus family .

From 1880 the village quickly developed into a glamorous seaside resort. In 1898, at the request of Prince zu Putbus , the merchant Hermann Holtz was elected mayor of Sellins. Later he also became chairman of the spa and bathing board. The Warmbad , the building of today's spa administration, was built on his initiative . A spa park with a fountain and a tennis court was created. In 1912 the Protestant church of grace was built ; in the same year the Catholic Church Maria Meeresstern was consecrated.

In 1951 the spa director Rix was murdered on the street near the rectory. From 1989 onwards, a citizens' initiative tried to clear up what was going on around the crime.

In 1953 - as in other Baltic seaside resorts in the GDR - the " Rose Action ", which aimed to dispossess private hotel and pension owners with expulsions, resettlements and arrests, led to fundamental changes in the property structure for almost 40 years. Mayor at that time was Heinrich Wilhelms. In 1960 the Gnadenkirche burned down in part.

In 1978 a rest home of the Central Committee of the SED was built above the seaside resort , today's “Cliff Hotel”. It has a large swimming pool, bowling alley and cinema, as well as an elevator to the beach.

After the political turning point in 1989, the structure of the town was largely renewed. From 1992 the Sellin pier was rebuilt; it was officially inaugurated on April 2, 1998.

A new residential area was built in the south-east of the town in the 1990s, in which almost exclusively holiday apartments were built. The size and number of these new buildings today contrast with the formerly historical site of this seaside resort.

The coat of arms was approved by the Ministry of the Interior on November 4, 1997 and registered under the number 144 of the coat of arms of Mecklenburg-Western Pomerania.

Blazon : “Divided; above in blue a flying silver seagull; sheathed in black and gold below. " 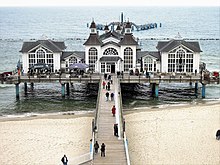 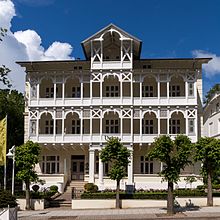 Sellin is located on federal highway 196 , which connects Bergen with Göhren.

Sellin can be reached by rail with the steam-powered narrow-gauge train Rasender Roland , which runs from Putbus to Göhren. There is hourly service between Binz and Göhren in summer. The trains carry luggage carts to transport bicycles, there are stations in Sellin West as well as Sellin East (Strand, Wilhelmstraße etc.).

In local public transport , the municipality is connected by the Vorpommern-Rügen transport company with line 20 (Klein Zicker - Göhren - Binz - Sassnitz - Königsstuhl) . In the summer season the buses between Binz, Sellin and Göhren run every 15 minutes in the morning and in the afternoon and until midnight in the evening. In summer, individual trips also offer the possibility of transporting bicycles. Local bus route 25 runs seasonally; it opens up the central town and also runs to Seedorf and Moritzdorf .

In Sellin there is also a road-bound " bathing railway" that connects the spacious town with the beach. All public transport by road can be used free of charge with the tourist card.

In ship traffic, sightseeing trips to the chalk cliffs and the neighboring seaside resorts are offered from the pier.

The Nemo leisure pool has existed since 1999 . Since 2004 it has been called Inselparadies Sellin / Rügen .