The seaside resort of Ueckermünde (pronounced [ˌʏkɐmʏndə] ) is an office-free town in the Vorpommern-Greifswald in northeastern Mecklenburg-Vorpommern . The port city lies at the confluence of the Uecker in the Szczecin Lagoon and is the smallest of the 18 middle-class centers in terms of population .

The city is known for its zoo , its well-preserved old town with many architectural monuments , the city harbor and the Pomeranian residential palace as well as for its lido.

Ueckermünde is located at the mouth of the Uecker in the Stettiner Haff . The area around Ueckermünde is - apart from some elevations barely 20 meters high - almost flat. The natural area is protected by the nature park on the Szczecin Lagoon . Southeast of the city, the Ueckermünder Heide, the largest forest area in Western Pomerania, extends over 50 kilometers to the Polish Police (Pölitz). Between 1936 and 1945 there were also two explosives factories here, designated with the cover names See I and See II, commonly called Muna (munitions factories ).

The districts belong to Ueckermünde

The actual urban area is divided into:

The name is derived from the Wendish Ukrer , a Slavic peoples who lived in the Uecker catchment area before 1200. In 934 Widukind von Corvey mentions the Slavic Uchri tribe . Other sources also wrote of the Vucrani or Ucrani tribe and, in 1178, of the Ucra province . 1178 the name Ucramund appears in the documents. The name of the tribe, the landscape and the river then changed via Ukeremund , Ukeremunde to Ukermunde  (1284).

In the old Slavic times, Ueckermünde was a fishermen's settlement due to its location.

Ucramund was first mentioned in a document in 1178 (other sources 1223) and in 1243 it was subordinated to the Grobe monastery on Usedom. Duke Barnim I founded a monastery around 1260 , and the original trading center was granted city rights under Luebian law . In 1276 the place was named as civitas and in 1284 the castrum ukermunde , the castle of the Dukes of Pomerania from the Greifenhaus , initially built as a castle .

In the 13th century, the city was also fortified with a city wall and two gates that withstood the siege by Brandenburg troops. In the great city fire of 1473, many of the medieval houses and the church fell victim to the flames. Then the late Gothic town church of St. Mary was built, which was completely abandoned in 1753 for a new building.

Ueckermünde in the 17th century

The following centuries marked many sieges and reciprocal conquests of the city. The city ​​was almost completely destroyed in the Thirty Years' War , only 15 of the 1,600 inhabitants survived. In 1631 around 40 houses were destroyed in a city fire, including the town hall, in 1639 there were only ten habitable houses. In 1648 the city became Swedish after the Peace of Westphalia . Queen Christina of Sweden decided to settle the places in the area with Finns and Livonians .

After Russian and Saxon troops occupied Stettin and Western Pomerania in the Great Northern War , Prussia took over provisional administration of the area for a payment of 400,000 thalers. With the peace of Stockholm , the acquisition of Western Pomerania with Stettin, Usedom and Wollin was decided on January 21st (or February 1st) 1720 against a payment of two million thalers. Ueckermünde had thus become Prussian. In the same year the dilapidated castle was torn down except for the south wing and the rest of the keep .

At the beginning of the 18th century, well-known princes of the time are said to have stayed in Ueckermünde again and again: the soldier king Friedrich Wilhelm I of Prussia, August III. , King of Poland and Elector of Saxony, the King of Poland Stanislaus I. Leszczyński and the Russian Tsar Peter the Great .

The Swedish army conquered the city in 1761 and set up their commanders' quarters in the castle. In 1766 the Gothic church was replaced by a new building. In 1806 Ueckermünde was occupied by French troops. As in the time of the Slavs , the inhabitants still lived mainly from fishing .

The city began to flourish at the end of the 18th and early 19th centuries. Similar to Torgelow were after the discovery of the lawn iron ore several iron foundries built. The brick industry with around 50  brick factories emerged in the 19th century. Ueckermünde became an important transshipment point, and shipbuilding also developed. From 1781 to 1795 102 ships were launched in Ueckermünde. After the Prussian administrative reform, the district of Ueckermünde was established in 1816 (with 832 square kilometers and 24,000 inhabitants) in the administrative district of Stettin in the province of Pomerania .

Around the middle of the 19th century, the shipowners represented in Ueckermünde had 27  merchant ships .

During the time of National Socialism , the ten to twelve Jewish families still in the city were persecuted, driven into emigration or murdered. A Jewish cemetery established in 1821 survived the National Socialist terror, but later fell into disrepair, was desecrated, but came under state protection in 1961 through the establishment of a memorial. During the Second World War, under the cover name See I , explosives were produced in the Ueckermünde explosives factory , located in the forest towards Eggesin . In 1945 the city was handed over to the Soviet troops without a fight and without any major war damage.

In 1950 the Haffmuseum, which is now housed in the castle, was opened and expanded several times. In 1962 the construction of the 18 hectare zoo Ueckermünde began with over 400 animals of almost 120 species and over 150,000 visitors annually. At the end of the 1960s, a new district was built in the east of the city in which up to 6000 people lived.

The largest company in the GDR era was a foundry with 1,100 employees. In 1997 the last of the 50 brickworks in Ueckermünde was closed.

The old town remained intact in GDR times, even if many buildings suffered major structural damage due to decades of maintenance backlog. From 1991 the historic city center with the preserved south wing of the castle (museum, city administration) was renovated as part of urban development funding, as was the old bulwark, an essential part of the old port. The district of Ueckermünde Ost (garden city) was completely redeveloped as part of the urban redevelopment east. The area was characterized by prefabricated buildings with high vacancy rates, which led to partial demolition measures and restructuring processes.

In the early 1990s, numerous hotels, guest houses and holiday apartments were built , a marina with 400 berths and 200 holiday apartments was built near the Szczecin Lagoon. In 2001 Ueckermünde was given the title of "State Recognized Resort". In 2002, Ueckermünde was recognized for its exemplary urban planning cooperation with the cities of Eggesin and Torgelow in the federal “ Urban Redevelopment East ” competition. Ueckermünde has been allowed to call itself Seebad since 2013 .

The river bathing establishment on the Uecker was opened in 1889, the lido in Ueckermünde in 1924 and the Haffbad with the beach hall and the changing room in 1927 . The municipal bathing and tourism association was founded in 1935. The first postcards from Ueckermünde also date from this time, on which “Haffbad Ueckermünde, the cheap bathing resort for workers seeking relaxation” could be read. After the war, large parts of the beach were turned into trenches, and the jetty where passenger ships and seaplanes docked was destroyed.

In the 1950s, a shipping pier was built on the Ueckerkopf (1959), the beach park was designed and the beach hall was restored. In the 1960s, a ten-kilometer belt around the city was declared a protected landscape area. In 1969 the municipal purpose association Erholungswesen Haffüste Ueckermünde was formed under the responsibility of the city of Ueckermünde. In the following year, the municipalities of Ueckermünde, Mönkebude , Grambin and Vogelsang launched a municipal economic project called “Hafftourist” to promote common tourist interests. After the fall of the Wall, the entire beach was renovated and made barrier-free.

Ueckermünde has had a large psychiatric clinic for many years. The sanatorium, today the “Christophorus Hospital”, was considered to be extremely progressive towards the end of the 19th and beginning of the 20th century. New treatment methods and forms of therapy were introduced. The mentally ill and handicapped were no longer just kept, but - as far as possible - employed and promoted according to the standards of the time.

When the National Socialists came to power, the political framework for dealing with the mentally ill and disabled changed. The Ueckermünder Heilanstalt gained notoriety in the course of the " destruction of life unworthy of life ", when tens of thousands of defenseless patients were murdered in the so-called T4 campaign and numerous children fell victim to child "euthanasia" .

Ueckermünde was clearly an important center of this action in Western Pomerania. While a large part of the sanatoriums in the area was closed and some were converted into SS barracks, the facility there remained. The number of newly admitted patients from closed hospitals rose, and mortality skyrocketed to the same extent. Hundreds of Nazi murders of the sick were covered up with the help of the Nazi special registry office and recorded as "normal" illness-related deaths in the hospital's statistics.

The inhumane accommodation and treatment of the disabled in psychiatry during the GDR period until shortly after the fall of the Wall was documented in 1993 by the ARD report “Die Hölle von Ueckermünde” by journalist Ernst Klee .

On July 1, 1950, the previously independent municipality of Bellin was incorporated.

The castle has been the seat of the mayor since 1999. The city administration is located in Rathausgasse.

The city council has consisted of 21 elected city representatives since May 26, 2019. These are composed as follows:

After reports of drug use, Walther was suspended by the city council in March 2018 and retired in December 2018 for health reasons.

Jürgen Kliewe was elected in the mayoral election on May 26, 2019 with 60.4% of the valid votes for a term of seven years.

The official seal shows the city coat of arms with the inscription "STADT SEEBAD UECKERMÜNDE".

There are town partnerships with the municipality of Pyrzyce in Poland (since 2017) and with Sande (Friesland) (since 2007). In addition, there was a partnership with Neuwarp (Nowe Warpno) in Poland from 1993 to 2015 .

→ See also the list of architectural monuments in Ueckermünde 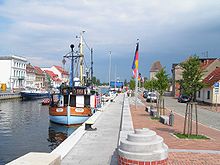 View over the harbor

Today the economy in Ueckermünde is predominantly characterized by tourism . The accommodation facilities range from small rooms in private rental to 3 to 4-star hotels and holiday apartments with their own boat berths. Since the late 1990s, in addition to water sports tourism, nature and cycling tourism have been increasingly expanded.

With around 200 jobs in the Ueckermünder foundry and other medium-sized companies u. a. In boat building, the chemical industry and wood processing, the city is an important production location for the region.

In addition to the city and yacht harbor, Ueckermünde has an industrial harbor that also offers large freighters the opportunity to handle goods. In 2013, 145,000 tons of goods were handled in the port  (2012: 110,000 tons).

On the outskirts of the city is the Diakonie-Klinikum Ueckermünde, which was expanded into a modern hospital in the mid-1990s.

In Ueckermünde, the state roads L 28 intersect between Ferdinandshof and Eggesin and L 31 between Ducherow and Altwarp . The federal highway 109 runs from Anklam to Prenzlau 13 kilometers west of the city . The closest motorway junctions are Pasewalk-Nord and Pasewalk-Süd on the A 20 ( Rostock - Uckermark triangle ).

The city is the end of the Jatznick – Ueckermünde railway line . With one of the few new lines in recent years, the railway line was extended from what was then Ueckermünde station to directly into the city harbor. From there, trains on the RE 4 regional express line run to Pasewalk . From there there are connections to Berlin, Stralsund and Neubrandenburg .

Passenger ships run regularly to Stettin , Swinoujscie and Kamminke on the island of Usedom .

The Berlin – Usedom long-distance cycle path and the Oder-Neisse cycle path run through the city . The old town center is traffic-calmed, which makes it a bottleneck for drivers. 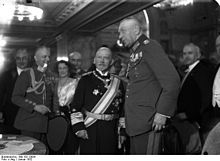 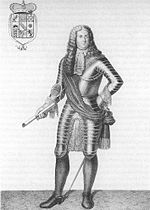 The sailing ship Wappen von Ueckermünde was christened on May 5, 2007 by Eva Luise Köhler after the city of Ueckermünde.

The rescue boats Gerhard ten Doornkaat and Dora of the DGzRS are stationed in Ueckermünde.