The title of this article is ambiguous. Further meanings are listed under Torgelow (disambiguation) . 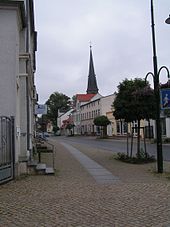 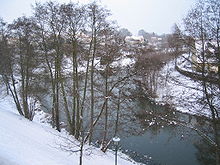 Torgelow ( [ˈtɔʁɡəlo] ) is a small town in the district of Vorpommern-Greifswald in Mecklenburg-Western Pomerania (Germany). It is the administrative seat of the Torgelow-Ferdinandshof office formed on January 1, 2005 , to which six more municipalities belong. Torgelow forms a basic center for its surroundings .

The city is located on the lower Uecker in the Ueckermünder Heide area between the cities of Pasewalk and Ueckermünde .

The following districts belong to the city of Torgelow:

Housing estates within the urban area are Drögeheide and Spechtberg.

The place name Torgelow is of Polish origin and means something like marketplace (cf. Polish targ , Upper Sorbian torhošćo ) from the root word "Torg" . Here, at the confluence of the Uecker and Randow rivers, was an important trading post with Alt-Torgelow Castle.

According to a less likely alternative interpretation, the place name should come from the Polabian turŭ for aurochs or Turreghlaue for bull's head.

A castle and landscape were mentioned as early as 1270 "in mercia turglowe". Torgelow was first mentioned in a document on April 14, 1281, when the Brandenburg Margrave Otto IV signed a certificate at Torgelow Castle. In 1333 Henning and Hermann Torgelowen were named. Around 1350, Bertram Hase had Alt-Torgelow Castle built. He was notorious as a highwayman and robber baron and defied the armed forces of the sovereign himself. Duke Bogislaw VI. could not take the strong castle despite a long siege, a comparison was made, but Hase continued his robbery. 1446 besieged Duke Wartislaw IX. the castle again, because the descendant Zacharias Hase was also a robber baron. But he could not withstand the overwhelming odds and fled. The castle was destroyed. When Hase returned, the Anklam merchants, who were particularly hard hit by the highway robbery, prevented the castle from being rebuilt. 1454 enfeoffed Duke Wartislaw IX. the knight Bernd von Muckerwitz (Pomerania) with the Torgelow estate, but his family died out soon after 1568. The knightly estate then became the domain of the Duchy of Pomerania-Wolgast .

The settlement was completely destroyed in the Thirty Years War . Queen Christine of Sweden decided after the peace treaties of Munster and Osnabrück to settle the place with Finns and Livonians . At the end of the Northern War , in 1720, Old Western Pomerania and thus also Torgelow belonged to Prussia .

Torgelow became famous when lawn iron ore was found at the beginning of the 18th century . This was the basis of the cabinet order of Frederick II of December 25, 1753 for the construction of the "Royal Prussian Ironworks at Torgelow". Torgelow now developed into an industrial village .

The steelworks was a separate police district until after 1865. Torgelow was the parish village and in 1865 had a church, a preacher's widow's house, a sexton's house, three schools, a steam mill, a Krughof, 105 residential buildings and 208 farm buildings. The place had 1570 inhabitants in 330 families, including six half-farmers and 102 Büdner , the others were day laborers in the extensive state forests, but many craftsmen were also based in the residential areas. At that time the following places belonged to Torgelow:

During the National Socialist era , the town's nine Jewish citizens were persecuted, forced into emigration or killed. The synagogue of the former Jewish community was burned down.

At that time there were 14 foundries . From 1935 onwards, a large explosives factory near the Spechtberg district was built by Deutsche Sprengchemie GmbH under the code name "See II" . At the same time , the German Air Force established an ammunition plant (Muna), the Torgelow air ammunition plant (also Luftmunitionsanstalt 1 / III), in the Müggenburg state forest . During the Second World War , 3,500 men and women from the countries occupied by Germany had to do forced labor in these factories under horrific conditions . Many of the slave laborers died or were murdered.

Torgelow received town charter on May 4, 1945 from the Soviet town commander . After the Second World War, the foundries on the site of the former Haller works were merged to form VEB GUS (cast and forged parts ), until 1989 as VEB Gießerei und Maschinenbau "Max Matern", one of the largest companies in the region. Parts were built for the shipyards in Rostock and engine housings were cast.

On July 1, 1950, the previously independent municipality of Jägerbrück was incorporated.

Torgelow was particularly known for its barracks in the area and the Jägerbrück military training area east of the city .

From 1952 to 1994 Torgelow belonged to the Ueckermünde district (until 1990 in the GDR - Neubrandenburg district , then in the state of Mecklenburg-Western Pomerania). In 1994 the city was incorporated into the Uecker-Randow district. Since the district reform in 2011 , it has been in the Vorpommern-Greifswald district .

Since 1991, the historic city center has been thoroughly renovated as part of the urban development funding. For its exemplary urban planning cooperation with the cities of Ueckermünde and Eggesin , Torgelow was awarded in the federal competition " Urban Redevelopment East " in 2002.

Müggenburg is located in a clearing in the middle of the state forest. To the east extends the area of ​​an extensive wooded inland dune. The place was a domain and in 1770 received a Dutch shop , a Büdnerei , a tar smelling shop and a rod beating in the sub-forestry .

The railway line from Jatznick to Ueckermünde is south of the village. The OPAL gas pipeline from Lubmin to Saxony runs to the west next to the town.

The Müggenburger tar furnace is only a ground monument , the forester's house next to it (with stick beating) is still well preserved.

Spechtberg was initially assigned to the Torgelow village as a place to live. An area south of the locality is still called “Büdnerland”. Since Spechtberg was separated from Torgelow by the Uecker, it developed independently with a lime kiln and a forestry department. It was not until the 1950s that Spechtberg became a large town with the establishment of the NVA barracks there with the associated housing estate for the officers and professional soldiers and their families. After the reunification , the tank battalion 413 "Ferdinand von Schill" of the Bundeswehr established itself there .

The Torgelow city ​​council has 21 members. Since the local elections in 2019, it has been composed as follows:

Pukallus was elected in the mayoral election on November 11, 2018 with 71% of the valid votes for a term of nine years.

The flag was approved by the Ministry of the Interior on February 27, 1992.

The official seal shows the city coat of arms with the inscription "STADT TORGELOW * LANDKREIS VORPOMMERN-GREIFSWALD". 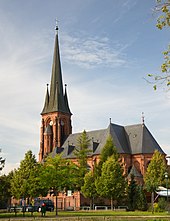 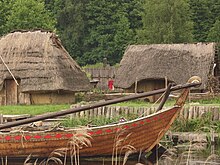 The iron foundry Torgelow GmbH is a metal processing company with about 400 employees, the largest employer in Torgelow. The Bundeswehr is stationed in Torgelow with the Jäger Battalion 413 and five of its companies.

Torgelow has been connected to the Jatznick – Ueckermünde railway line since 1884 . Torgelow train station is served every two hours by the regional express line RE 4 of Deutsche Bahn ( Pasewalk –Ueckermünde Stadthafen) and every hour during rush hour.

The Berlin – Usedom long-distance cycle route runs through the city .

Districts of the city of Torgelow