Lütow is a municipality in the northwest of the Vorpommern-Greifswald district . It is located in the northwest part of the island of Usedom on the Gnitz peninsula, a headland on the island of Usedom on the backwater . The community is administered by the Am Peenestrom office based in Wolgast . Until January 1, 2005 Lütow was part of the Wolgast-Land office .

Lütow is located on the Gnitz peninsula on the northern part of the Achterwasser , about nine kilometers east of Wolgast and three kilometers south of Zinnowitz . The federal road 111 runs north of the municipality . Lütow is also located in the Usedom Island Nature Park .

The only large stone grave of the passage grave type on the island of Usedom has been preserved near Lütow as evidence of the early human settlement of the area. The large stone grave dates from the Neolithic Age (Neolithic 5500 to 1800 BC). Two other large stone graves in the vicinity are known and located, but no longer exist, they fell victim to the stone breakers of the 19th century for road construction. Later, after the Germanic tribes and the migration of peoples, the so-called Elbe Slavs settled. The high point of their culture was the late Slavic period from the 11th to the early 13th century. In the last phase of the Slavic settlement, a distinguished Slavic nobleman named Henricus de Gnez (vom Gnitz), who probably died around 1225, appeared in the sources as the castellan of the Pomeranian dukes at their castle in Usedom .

The place Lütow itself was first mentioned in 1241 as "Lichou" and on April 9, 1396 as "Lutkow". The Slavic name is interpreted as "the grim one". As early as the 13th century, the first representatives of the noble von Lepel family appeared, who were the landowners of the villages on the Gnitz (Neuendorf, Netzelkow, Lütow) and Görmitz until the land reform in autumn 1945 . Your seated goods were Neuendorf and Netzelkow. Lütow also had other owners besides the Lepels, and it was often pledged.

In 1865, the farming village lent to the Lepel family had eight farms and five Büdner farms . Lütow was a pertinence to Netzelkow. The village had 13 houses and 11 farm buildings.

During the Soviet occupation after the Second World War , a few small and medium-sized new farms emerged with the land reform in Lütow , which were then merged into the local LPG in the 1950s to 1960.

The area from the "White Mountain" to the tip of the Gnitz peninsula is classified as a nature reserve.

A wellness bath with a hotel and holiday homes in the village and a larger natural campsite on the “White Mountain”, which was already a campground with a holiday camp in the old district of Grimmen in GDR times, has belonged to the place since 1996.

In the Neuendorf district there were two large stone graves from the Neolithic Age (Neolithic 5500 to 1800 BC), but they have not been preserved, like the one near Lütow. At Neuendorf there is still an early German tower hill ( Motte ) as a remnant of a manor house of the von Lepel family. Such hill towers were built in early German times from 1230 as the first mansions of the German locators. The von Lepel have been mentioned in a document since then, but not directly the associated places on the Gnitz.

The district of Neuendorf was first mentioned in a document on November 19, 1367. A Wedekin Lepel sitting on Neuendorf was mentioned in a document from the Pudagla monastery . The place was a feudal estate of the von Lepel family. The oldest feudal letter was issued for Henning Lepel by Duke Bogislaw in 1487 for the Gnitz, Quilow, Senerzin, Czarnitze and parts of Lassan. Bauer, Wehrland and Rubkow were added in the loan letter of 1701. The Lepels' main seat was Neuendorf, when the family split, Netzelkow was also a secondary residence, but mostly as a pertinence to Neuendorf.

The single-storey brick half-timbered house with a half-hipped roof and centrally gabled roof bay was built around 1820 as a manor house and was given a two-storey side wing at right angles in 1850. Despite considerable damage to the half-timbered construction and numerous interventions in the post-war period, after extensive renovation in 2005, the historical appearance and the interior structure were restored and used.

The village counted in 1865 without an owner's farm: 1 Büdnerstelle, 1 windmill and 10 houses. It had 155 inhabitants.

The estate was owned by the von Lepel family until 1945. After the end of the Second World War, when Usedom was taken by the Red Army , the elderly landowner von Lepel was abducted by the occupying power of the Soviet Union . The Lepels family crypt, located in a wooded area, was heavily devastated by the occupying forces. The manor house was looted, among other things. a. also by Polish forced laborers; According to eyewitness reports, Polish women in the evening dresses of the landowner are said to have strolled through the neighboring seaside resort of Zinnowitz after the looting . The landowning family was later expropriated during the land reform . After the fall of the Wall , the von Lepel family did not get their property back.

The place was dominated by agriculture until the 1960s and 1970s. Subsequently, extensive deposits of oil and natural gas were found here. These were still used to a small extent until the beginning of 2016.

The district Netzelkow was first mentioned in 1358 as an old possession of the von Lepel family. (No receipt visible!)

Netzelkow was first mentioned as such in 1516. It is called the capital of the Gnitz peninsula. The name is said to have developed from the Gnecow mentioned in 1230. In 1618 the Lubin map names the place "Meselcow".

It is the church village on the Gnitz (also known as Gnysse ).

The place still had a large estate until the 1920s, of which only remains of the foundations can be seen today. Lütow was pertinent to this estate. For the owners see above at Neuendorf.

The towerless church with a renatured churchyard has an attached burial chapel of the von Lepel family from 1747 on the side. Inside the church there is a sarcophagus with a lying colored wooden figure of Christian Carl von Lepel (1668–1747). The outside bell has the oldest bell in Pomerania from around 1350. Next door is the parish farm with the old parish barn.

In 1865 Netzelkow had an estate, the church, the parish farm and ten houses with 165 residents.

After 1945 the estate was built over with new farms as a result of the land reform. Only remnants of the estate park are still there. Otherwise the place kept its structure.

During the GDR era, the farms came to the LPG in Neuendorf until 1960. Soon afterwards, oil was also being drilled and extracted in Netzelkow.

Netzelkow has had a small harbor with a yacht dock and a restaurant ship a little to the north since 1990.

The place "Görmitz" or "Görms" was first mentioned in 1672 as an inhabited place. The Slavic name is interpreted as summer sowing.

The municipality has no officially approved national emblem, neither a coat of arms nor a flag . The official seal is the small state seal with the coat of arms of the region of Western Pomerania . It shows an upright griffin with a raised tail and the inscription "GEMEINDE LÜTOW * LANDKREIS VORPOMMERN-GREIFSWALD".

In 1965 crude oil was found on the Gnitz near Lütow and in 1966 the production by VEB Erdöl-Erdgas Grimmen began . Several deep pumps were in operation at Neuendorf and Netzelkow until the 2010s . The Lütow deposit was the largest known oil deposit in the GDR. A total of 1.3 million tons of oil were produced there. 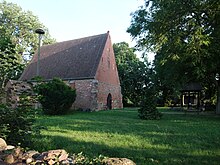 St. Marien Church in Netzelkow with a belfry