The title of this article is ambiguous. Further meanings are listed under Buggenhagen (disambiguation) . 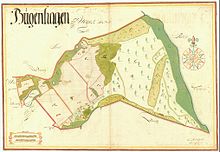 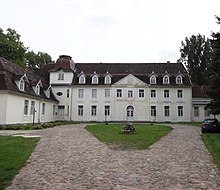 Till Richter Museum in the Buggenhagen manor house

Buggenhagen is a municipality in the Vorpommern-Greifswald district , located on a promontory on the Peenestrom . It has been administered by the Am Peenestrom Office , based in Wolgast , since January 1, 2005 . Buggenhagen was part of the Ziethen office until December 31, 2004 . Buggenhagen is one of the most sparsely populated areas in Western Pomerania .

Buggenhagen is located about three kilometers south of Lassan in the Usedom Island Nature Park . The Peenestrom runs south of the municipality . There are many forests and bodies of water in the area. Larger lakes in the Lassaner Winkel are the Pinnower See , the Straßensee , the Schlowersee , the Berliner See and the Schloßsee . Furthermore, east of Buggenhagen, there is a connection between the Stettiner Haff and the Achterwasser and the Krumminer Wiek . The largest forest areas are the Große Heide and the Große Moorholz directly on the Peene River, which with the Seidenbruch are partly below sea ​​level .

The largest elevations in the community are the Orgelberg (19 m), the Hasenberg (19 m) and the Kieksberg (25 m). The built-up location is between 0 and 15 m above sea level. NHN .

Buggenhagen was first mentioned in 1618 on the Lubin map as Bugenhage . The current spelling has been used since 1679.

The name Buggenhagen comes from the noble family "von Bughe". A castle belonging to the knight Berend von Bughe (Buggenhagen) was first mentioned in the area in 1250. In 1260 the Buggenhagens received the feudal letter from the duke. Buggenhagen is probably the oldest part of today's municipality. However, these mentions relate to the family.

This statement without evidence is questionable. The von Bugh (Bughe, Buch etc.) were only mentioned in 1282 according to the PUB and only on Rügen. The von Buggenhagen are mentioned from 1284 and again in 1291 and document in Lassan, i.e. in the area of ​​Buggenhagen, and were owned there.

The goods often changed hands within the family. The line on Buggenhagen had possessions:

The Buggenhagen manor house was built in the first half of the 18th century, according to the Prussian original measuring table sheet from 1835. Buggenhagen Castle is a two-story building with a high roof and ornamental gables. At the end of the 19th century, it was extended by four axes and then it was converted into a three-wing system in a U shape. The manor house is located in the middle of the extensive park, secluded from the actual estate. The park includes the castle lake. Located in the south of the park, it had a previous building that has been archaeologically proven, remnants are still recorded in the measurement table (MTB) 1920.

Until the end of the Second World War in 1945, the place was owned by the von Buggenhagen family .

From 1995 to 2002 it was used as a hotel. It has served as the Till Richter Museum since 2014: every year, one or more young artists are invited to create works for a few months, which are then exhibited.

From the Thirty Years' War to 1815 Buggenhagen belonged to Swedish Pomerania , then to the Kingdom of Prussia . Buggenhagen has been part of the state of Mecklenburg-Western Pomerania since 1990.

The Jamitzow district was first mentioned in documents in 1315. The name is derived from the Slavic "Lämmerwiese". It was owned by the von Köller family from the 14th to the 16th century . Henning and Arnold were named in the document from 1315. In the 16th century ownership passed to the von Neuenkirchen family. The surviving daughter Barbara von Neuenkirchen inherited the estate and married Joachim von Owstin from the Quilow line.

In Niemeyer the first mention of Jamitzow as Jamesouw is only given in 1496.

In 1618 the village was named "Jamzow" on the Lubin map . It used to stretch further towards Peene and was frequently hit by floods. That is why it was moved to its current location.

Around 1631 Jochen Kuno von Owstin built the manor house. He and his subsequent generations used it as a residence until it had to be demolished in 1910 due to its dilapidation. The line died out in 1698, and so the manor came into the possession of the von Normann families , von Krauthoffs in 1829 and von Rombergs .

In 1911 the new owner, Consul Franz Frischen, had the house torn down and a new building built according to plans by the Berlin architect Heinz Lassen with 50 rooms for 350,000 Reichsmarks . Frischen died on March 26, 1917 and was first buried in Jamitzow before his bones were transferred to Düsseldorf . In March 1929 the castle burned down, but was rebuilt. The new house is a clinker brick building with a rare round arched central gate passage. In 1947 the associated stables burned down .

View to the dam Klotzower ferry

Klotzow was first mentioned in a document in 1267 as Clotsow . From 1631 onwards, most of the mentions were made with the current name. The Slavic name is interpreted as "dull noise".

Klotzow was a manor of the von der Lüe family (also Lühe) around 1425. After that, it belonged to the von Neuenkirchen family and the von Mevius family along with the Pertinenz Wangelkow. In 1669 the property went to Baltzer von Horn auf Ranzin. It remained in the von Horn family until 1795, who then sold it to Count Wilhelm von Mellin. Finally the estate came to the von Buggenhagen family with pertinence in 1856.

Wangelkow was first mentioned in a document in 1371 as "Wanghelkow". The name means “coal” in Slavic, which is an unusual name for the area.

Wangelkow was a typical estate village with the dominant estate and farm workers' cottages next to the estate.

In 1865 the place had 27 inhabitants in 5 families, as well as 2 residential and 4 farm buildings.

After 1945 the village center changed towards the lake. The manager's house and a few farm buildings remained from the estate. The manor park has developed into a forest area.

This place was mentioned in 1792 as Klotzowi's ferry . The place is desolate , it consisted only of the ferry farm, which was no longer of any importance with the construction of the Zecheriner bridge. In 1868 the place was given its current name, for the last time in 1932 in the municipal directories. For an interpretation of the name, see → Klotzow.

Today the dam from Klotzow to the former ferry is under water, as is the whole area. The polders have been flooded in recent years.

Silberkuhl was first mentioned as such in 1782. There was a dairy farm , a fisherman's house and a ferry in the village . As a place it ceases to exist around 1900, there is only a forester's house with the name left.

In 1865 the place had 12 inhabitants in 3 families, there were 2 residential and 3 farm buildings.

The municipality has no officially approved national emblem, neither a coat of arms nor a flag . The official seal is the small state seal with the coat of arms of the region of Western Pomerania . It shows an upright griffin with a raised tail and the inscription "GEMEINDE BUGGENHAGEN * LANDKREIS VORPOMMERN-GREIFSWALD".

The federal highway 110 runs south of the municipality