This article covers the inlet. For the ship type, see: Type Peenestrom

The Peenestrom is an arm of the Baltic Sea in Mecklenburg-Western Pomerania , which separates the island of Usedom from the mainland. It is just over 20 kilometers long and connects the Stettiner Haff with the open Baltic Sea as the westernmost of three sea ​​gates (next to Swine (Swina) and Dievenow ( Dziwna )) . This means that the Peene River is also one of the three branches of the river Oder to the sea. Strictly speaking, the six-kilometer stretch from the lagoon to the delta of the Peene is not called the Peene River , but Der Strom .

The Peenestrom has several bulges, some of them large, such as the Achterwasser and the Krumminer Wiek, both of which protrude far into the island of Usedom on the eastern side of the Peenestrom, and the Spandowerhagener Wiek on the western side. There are some islands in the Peene River, such as the large and small Wotig (large pipe plan) and the small pipe plan .

The Peene River takes its name from the River Peene , which flows into a small delta east of Anklam . After the Peene, the Ziese is the second largest flowing water that flows into the Peene . On the Peene River, the currents are sometimes quite strong, as strong northerly to northeast winds push water masses from the Baltic Sea into the lagoon and later flow away again.

In addition to the Wolgast seaport , the former military port of Peenemünde , the fishing port of Freest and the ports of Karlshagen and Lassan are also located on the Peenestrom . The Peenestrom is a popular sailing area with various small marinas, including in Freest, Kröslin , Peenemünde, Karlshagen, Zinnowitz , Wolgast, Krummin and Ziemitz .

By the end of 2009, the fairway in the northern part of the Peene River was deepened to 7.5 meters as a sea waterway. This deepening enables ships with a payload of 2000 TEU or 3500 tons to navigate the river from the Baltic Sea via the Landtief , the Greifswalder Bodden and the Knaackrückrinne to the port of Wolgast. The fairway south of Wolgast was set at 2.5 m. 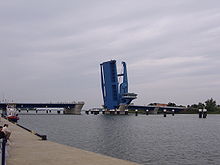 At Zecherin (district of the city of Usedom ) a steel lattice road bridge leads over the Peene river, the middle part of which is designed as a bascule bridge . In Wolgast, a combined railway and road bridge built in the late 1990s connects the mainland with the island of Usedom, which is also designed as a bascule bridge. Both bridges are opened several times a day at set times, thus providing a passage for shipping. Another bridge for Wolgast is in the planning phase.

A passenger ferry, which also transports bicycles, crosses the Peenestrom between Peenemünde and Freest / Kröslin, another runs between Karnin and Kamp.

Near the Usedom district of Karnin, in the middle of the Peene River, as a relic of the former Berlin – Swinoujscie (1876–1945) railway line stands the remainder of a lift bridge , which at the time of its construction was considered a technical masterpiece due to its length and construction. During the Second World War , the bridge ramps leading to the lift bridge on both sides were blown up by the retreating German Wehrmacht . Only the lift bridge itself remained undamaged.

Between Kröslin and Peenemünde and between Kamp and Karnin, two dual-system 110 kV high-voltage lines cross the Peenestrom.

The Peene River is an important habitat for water birds, especially because of its fish population, for example for sea ​​eagles , herons , cormorants and terns . The Peene estuary with its offshore shallow water area and numerous sandbanks, as well as the Struck peninsula and the island of Ruden , were designated as a nature reserve as early as 1925 because of their abundance of birds.