A seaport is a port that can be called by seagoing vessels . Seaports can be on the coast, rivers and / or canals .

If they are in a tidal region, they are designed as a tidal port ( open to the sea) or as a dock port (port basin separated from the sea by locks or barrages ). Sea ports are equipped with loading facilities, e.g. B. RoRo systems, cranes for container or general cargo - transshipment or extinguishing systems for crude oil or gas as well as equipped with storage areas and offer connections to other means of transport ( intermodal transport : railways , trucks ) or to inland waterway transport .

Economic importance of the seaports 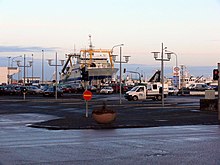 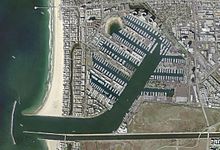 Seaports bundle traffic flows of road and rail traffic, inland, coastal and overseas shipping . You thus make an important contribution to relieving the road. When the volume of goods handled in the seaports increases, there may be bottlenecks in seaport hinterland traffic in places.

Some seaports are also hubs for passenger traffic with ferries , cruise and excursion ships. In 2014, 30 million passengers were registered, 17.2 million (55.8%) of them in the German Baltic Sea ports alone.

The German seaports provide a wide range of other services and are important industrial locations, for example the few remaining shipyards , steelworks , refineries , flour mills , oil mills and roasting plants . They make a significant contribution to securing and strengthening employment, income and tax power in Germany and promote economic development in the coastal countries. In the German coastal region, around 300,000 jobs are directly or indirectly dependent on the seaport functions.

The largest seaport project in Germany in recent years was the construction of the Wilhelmshaven container port ( JadeWeserPort ). The investment volume of 900 million euros (hydraulic engineering and quays) was borne by Bremen and Lower Saxony.

Financing of the seaports

German seaports were in the Middle Ages during the Hanseatic League and especially with the construction of the first artificial harbor basins ( Bremen-Vegesack , Bremerhaven ) and since then have been in municipal ownership and under municipal management. Today the sea ports are still in municipal ownership as infrastructure objects (entire hydraulic engineering including the fortification of the quay areas ); the superstructure (everything above ground level) is built, maintained and operated by operating companies in various ownership and direction .

So far there has been no national funding for seaport construction in Germany. Even the dredging of the access roads in Ems , Weser , Elbe ( Elbe deepening ) and Trave is not financed by the federal government alone. During the Bonn Republic from 1949 to 1990 this corresponded to the interests of the regions bordering the Rhine, whose supply was / is secured by the ports of Antwerp , Zeebrugge , Amsterdam and Rotterdam and by the national interests of Belgium and the Netherlands .

In the Berlin Republic since 1990, the federal government has not yet set any political goals for port operations and the promotion of port construction in laws, and the arbitrary historical borders of the federal states allow Lower Saxony and Schleswig-Holstein to cultivate specific regional interests. This can be seen in the competition between Lübeck and Kiel as well as Brake and Nordenham with Bremen and Bremerhaven . The new construction of the deep-water port in Wilhelmshaven is the first approach of mutual insight , but without Hamburg's participation . Changes will probably only occur when the competitive situation changes significantly due to increased wet-on-wet handling for Baltic Sea traffic to Russia via Saint Petersburg and Ust-Luga . 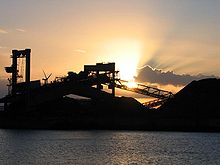 The world's largest seaports are located in Shanghai (China), Singapore and, for Europe, Rotterdam (NL). In view of the great importance of sea ​​trade , sea ports are important transshipment points. In the container shipping growth rates were achieved until recently substantial annual. However, the lower transport rates, trade restrictions and restrictions in the economy due to the spread of the corona virus are currently burdening the industry.