The term grain mill encompasses all technological processes for the extraction of powdery (flour-like) or even just dehulled or squeezed products from coarse, solid vegetable matter, here on the one hand the processing of grain into flour , semolina , haze and grist and on the other hand only the peeling mill Dehulling, peeling, possibly the subsequent crushing of the grain.

View into a computer-controlled mill

Control cabinet of a small mill

In grain mills in the narrower sense, grains such as wheat , rye and spelled are processed into flour. The grain is before it is ground, carefully cleaned and wetted with water so that the water in the shell ( bran can penetrate), which can be separated from the endosperm better. The grain is then ground with roller mills . The millbase is on a Plansichter screened. The flour is sieved and the meal is ground again until all of the flour has been dissolved out. This product guidance (grinding and subsequent sifting) is called passage .

Head of an elevator in a flour mill

Good cleaning is the basic requirement for gentle and consistent grinding on the mill.

The miller makes a difference

For these reasons, cleaning a grinder is essential. The basic equipment for cleaning includes separators , magnets, dry stone separators and trieurs . In addition, machines such as color sorters , paddy table separators, combination cleaning machines , concentrators and / or combinators can be used for better cleaning.

Net and stand out

In order to guarantee even grinding and a high yield at the mill, wetting is essential. The grain is moistened with water vapor . After wetting, the wheat should have a moisture content of 16.5 to 17.5%. Because it is important that the moisture is distributed as evenly as possible in the grain after the wetting and also penetrates the grain, the post is left to stand for 8 to 16 hours in special stand cells.

Reasons for the network are:

In today's high milling, grain is ground in roller mills with usually four or eight metal rollers , which rotate in opposite directions at different speeds (advance). There are smooth and fluted rollers with a twist. Due to the corrugation and the different speeds, the grains are broken open over a large area. Different sized pieces of grain arise with each grinding process. Through numerous sieving in the plansifter (see also separator ) these grain particles are sorted and separated according to size. The flour that has already accumulated is sieved out, the remaining meal is returned to a (different) roller mill, where the flour is separated again. The grain and its products go through 10–16 passages (depending on the milling diagram ) .

The names of the passages are not standardized internationally. However, there are three different types of passage worldwide:

The miller's goal is to produce flour that is as free from bran as possible and bran as far as possible. The yield of type 550 flour averages 76–82% for wheat.

Grain and flour samples are examined for analysis in the mill laboratory .

Section from a rye grinding diagram

There are a number of intermediate and end products:

The following products also come from a flour mill:

More than 100 different ground products can be made from bread grain. This includes not only the 13 Standardmehl- and two back shot types to DIN standard , but also a variety of specialty products: whole wheat flour and shreds, grits and flour, and mixtures tailored to the needs of bakers, pastry, pizza, biscuits and Cake makers.

Classification of the ground products

According to Seibel: Grain knowledge

Milling by all by-products at a joint production , necessarily incurred, as it represents the grain processing: bran , bran, bran, fodder flour, middlings and seedlings .

Replica of a Roman flour mill

Mill wheel of the Heroldsmühle

Grinder of a mill in Marienburg .

The first millstones existed as hand mills or quernes long before our era . Before that, people used graters and mortars to break up grains and prepare them for human consumption. The oldest rubstone was found and dated a few years ago during archaeological excavations in Australia (Cuddie Springs, see below). It is around 30,000 years old, much older than the Neolithic Revolution , and dates from the Pleistocene.

In 79 AD, Pompeii was destroyed by the eruption of Mount Vesuvius. During excavations, an advanced mill with a cone mill powered by Göpel was unearthed. In 546 AD, the Goths already used ship mills during the siege of Rome , in which the river drives the millstones via undershot water wheels .

Since the Middle Ages at the latest , a grinding process for grinding grain has been common. The grist was broken and ground between two millstones. The technology of the mill drive by water or wind and the use of the generated kinetic energy have been continuously improved. The kinetic energy gained not only drove the millstones, but was also used to move the cleaning sieves required in the manufacturing process and to transport the grist within the mill. The first fully mechanized operation was Oliver Evans ' mill, in whose 1785 mill on Redclay Creek, Delaware, all processing machines and conveyors were coordinated.

Due to flow production , which was widely adopted, it was often possible that the miller and a journeyman were sufficient to operate the mill. Mahlresultate improvements brought the invention, the semolina cleaning machine (1807), the millstones detaching roller mills (from about 1820) and the plan sifter said fine vibrating screens (1887).

With around 6,000 employees (including around 600 trainees in technical and almost as many in commercial professions), the grain mills generated sales of over 2.5 billion euros in 2015/2016. On average, each mill in Germany supplies over 300,000 people, or to put it another way: 2.5 mills supply one million residents with flour and other grinding products.

On a long-term average, around 27.5 million tons of bread grain (soft wheat including spelled and rye) are harvested in Germany. The harvest quantity can fluctuate by ± 2 million tons in the harvest year depending on the yield situation . Around a third of this is required for human nutrition.

According to official statistics, there were 211 mills in Germany in the 2015/2016 financial year; only mills with more than 500 t annual grinding were recorded. In this financial year, the mills ground 8.426 million tons of bread grain (7.64 million tons of wheat and 0.79 million tons of rye). 29 companies have milled 100,001 t of grain per year or more, and thus have a 68.2% market share in milling. Most of the mills (79, market share 37.4%) had an annual grinding of between 500 and 5000 t per year. The majority of all flour mills are in southern Germany (Bavaria, Baden-Württemberg): 110. Every German consumes around 69.7 kg of ground products per year. 555,000 t of wheat and rye flours were ground for export purposes. In addition to the ground products for human consumption, around 1.4 million tonnes of raw feed materials (bran, semolina bran, post meal, feed meal) were supplied to the compound feed industry. For the raw material grain, the mills in Germany had to pay as much as they had not in 25 years before: The prices per ton after the 2012 harvest were between € 225 and € 275. In contrast, the prices for wheat and rye flours are at a comparatively low level.

In Switzerland 48 mills have an annual production of more than 500 t. Four of these mills (each with more than 300,000 t annual grinding) produced around 62% of the total Swiss grinding volume in 2006. 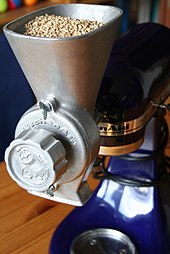 Flour mill for home use

In a relatively small form, the grain mill is also available as a kitchen device with which grains of grain can be crushed or ground in small quantities.

Most household grain mills are offered with grinding stones made of corundum ceramic, hand mills with stones made of Naxos basalt and grinding attachments for kitchen machines with steel cone grinders.

Mills with steel cone grinders do not grind as finely as mills with stone grinders, but they have the advantage that oily seeds such as linseed or sesame can be processed, which in stone grinders can smear the stones and, in the long run, even damage the stones. because oils can penetrate the porous stone surface. Small amounts of oily seeds can be ground with dry grain on the medium setting; towards the end of the grinding process, only grain should be added so that it can absorb the excess oil.