This article is about rolling; a description of the place of the same name in Poland can be found under Walzen (Upper Silesia) . 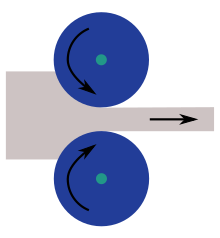 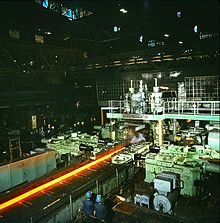 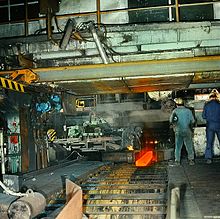 Rolling is a manufacturing process from the group of pressure forming , in which the (mostly metallic) material is formed between two or more rotating tools and its cross-section is reduced. If the forming takes place above the recrystallization temperature of the material, it is called hot rolling , otherwise cold rolling . The work of the waltz is mostly automated today.

In terms of material deformation, rolling is a massive forming process and is closely related to hammering or forging .

Process variants according to DIN 8583

In the classification system of pressure forming processes according to DIN 8583, rolling is mentioned as the first process, in addition to free forming , die forming and others. All rolling processes have a unique serial number: They always begin with the sequence 2.1.1 (2nd main group forming , 1st group pressure forming , 1st process (rolling)). At the first level, a distinction is made between how the workpiece moves relative to the axes of the rollers.

A passage of the rolling stock through the rollers is called a stitch .

With longitudinal rolling, the rolling stock is moved through the roll gap perpendicular to the roll axes without rotating about its own axis. It emerges as a strand from the rollers rotating in opposite directions. The strand with a constant cross-section is usually a semi-finished product that is further processed. The products can be divided into flat and profile products according to their geometry. The tools are accordingly called flat or profile rollers.

As flat-rolled products ( flat steel ) Rolled products are identified that are substantially wider than thick. In terms of quantity, they represent the largest proportion of the rolled products required worldwide and are manufactured as wound strips or individual sheets.

Sheets and strips made of steel and non-ferrous metals are produced by rolling between two almost parallel cylindrical rollers. The rollers bend as a result of the load. This roll deformation must be compensated for in order to produce flat products. For this purpose, the rollers are usually ground to be slightly crowned. There are various methods for influencing the crowning of the built-in rollers, including: a. Axial shifting of specially ground rollers, crossing the rollers, bending the pins and hydraulic or thermal changes in diameter.

Long products are wire , rods, tubes and profiles made of steel and non-ferrous metals . They are made by rolling between two to four rollers in which the caliber is cut. 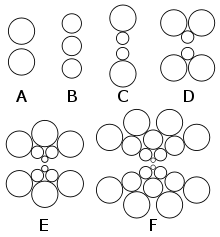 In the course of technical development and for special products, various types of rolling mills were developed for longitudinal rolling, which are still in use today.

A duo rolling mill consists of two parallel rolls between which the rolling stock is rolled. For repeating the rolling operation for further reducing the thickness of the rolled material or to further rolling to the next caliber it is necessary at a high mill (engl. "Two-high rolling mill") either bring the rolled stock back to the other side of the scaffold, or the direction of rotation of Reverse the rollers (reverse). The former was achieved by lifting the horizontal roller tables on which the rolling stock runs in front of and behind the roll gap on the side of the roll stand ( Fritz'scher rolling table after the inventor George Fritz) and the rolling stock over the upper roll onto the other Page back conveyed what the roller supported by friction. However, due to the improvement of the gearbox, the reversing method gained more and more importance, since lifting over the upper roller as an empty cycle is always associated with a cooling of the rolling stock. With the advent of the electric drive, reversing became technically even easier and it was also possible to arrange several rolling mills one behind the other, which was previously too complex due to the drive shaft of the drive (steam) machine being as continuous as possible.

Another method of rolling the rolling stock further with the same stand without having to lift or reverse it is to use a so-called trio rolling mill (English "Three-High Rolling Mill"). In the trio arrangement with three rollers, the rolling stock z. B. rolled first between the lower and middle in one direction and then between the middle and upper roller in the other direction. The design of the calibres for a progressive profiling of the rolling stock is more complicated with the trio arrangement. Furthermore, the middle roller is mechanically particularly heavily loaded, since it is used in both rolling cycles, and therefore has to be replaced relatively often.

In 1848 Reiner Daelen invented a rolling mill in which the two horizontal rolls of a duo stand are supplemented by two vertical rolls in front or behind, and the adjustability of the roll gap meant that a wide variety of rectangular profiles could be produced without changing rolls. The universal rolling mill was first used at Piepenstock & Co. in Hörde .

In order to reduce the deflection of the work rolls in contact with the rolling stock, they are often supported by back-up rolls - usually with a large diameter. If a total of four rolls are installed in a roll stand, one speaks of a four-high arrangement . Six roll stands can be built in a vertical or sendzimir arrangement . In the latter, each work roll is supported by two rolls that engage the work roll at an angle of approximately 120 degrees to reduce vertical as well as horizontal deflection. For rolling very thin or very solid materials, stands with up to 20 rollers are used.

Forging rolling is longitudinal rolling in which the cross-sectional area of ​​raw parts is changed by passing them through two counter-rotating rollers. The individual segments of the rolls are designed so that the profile cross-section of the raw parts changes in the circumferential direction. The process is often used to produce preforms with a favorable mass distribution for downstream closed-die forging processes. Through this targeted mass distribution, the use of materials and process forces in closed-die forging can be reduced and the surface quality of the components can be increased. As a rule, any material that can be forged can also be processed by forging rollers. Preforms produced by forging rollers are used for the drop forging of components such as crankshafts, axles and link components. The tightest manufacturing tolerances cannot be achieved by forging rollers, which is why the process is rarely used for finishing.

Cross rolling, also called cross wedge rolling, is the forming of a rotationally symmetrical blank between two flat jaws or round rolls moving in opposite directions. A distinction can be made between round cross rolls and flat jaw cross rolls. Cross rolling is primarily used for the production of large quantities. By cross rolling, a material utilization of up to 100 percent can be achieved and thus an almost burr-free massive forming, which is particularly ideal for long parts or multiple parts. Rotationally symmetrical components with mass accumulations along the axis of rotation can be realized by means of transverse rollers.

In the case of round cross rolls, the rolling stock rotates around its own axis between two or more tool rolls rotating in the same direction. The workpiece is deformed by infeeding at least one tool roll.

Characteristic features of round cross rolling are:

With flat jaw cross rolling, the rolling stock is formed between two tool plates running horizontally or vertically against each other. The flat design of the tools is characterized by the simpler construction and manufacturing technology in contrast to a curved roller, but has the same design parameters.

Flat-jaw cross-wedge rolling was investigated for preforming during warm forging of asymmetrical long parts (here: wishbones). Up to now, such parts have only been forged warm. In the past, however, this led to a relatively high proportion of burrs (19.8% of the raw part mass). Cross-wedge rolling reduced the burr proportion (7.48%). It could be shown that geometrically relatively simple preforms can be produced by warm cross wedge rolling. The forces during rolling were 2.5 times higher at a raw part temperature of 850 ° C than at 1,250 ° C; this increases the energy requirements of the rolling mill. An economic analysis showed that the energy savings due to the lower temperature were 10% higher and the process is therefore more energy-efficient overall.

In ring rolling, seamless rings, for example wheel tires for railway wheels , are produced. The starting product is a compressed and concentrically perforated pre-ring, which is expanded on ring rolling machines . By reducing the wall thickness (radial) and the ring height (axial), the ring diameter increases according to the constant volume.

In the case of skew rolling, the roll axes are crossed. This creates a longitudinal feed in the workpiece rotating around its longitudinal axis. The workpiece is held in the roll gap by support rulers or guide rollers. The roll caliber is designed so that the roll gap narrows. Skew rolling is used as a process for producing tube blanks or as a high-reduction rolling mill for long products. Skew rolling takes place primarily in the manufacture of pipes ( steel pipes ).

Seamless pipes such as steel pipes can be produced by rolling . Various methods are used for this. A distinction must be made between three basic process steps, punching, elongation (stretching) and reducing (finish rolling). Punching takes place on cross rolling mills or piercing presses. The elongation takes place in several steps. Cross rolling mills and longitudinal rolling mills, for example, can be used for this purpose. The final forming step is the reduction to the desired outer diameter.

Elongation process : All elongation processes are characterized in that an already perforated insert block is only reduced in wall thickness and, if necessary, changed in diameter.