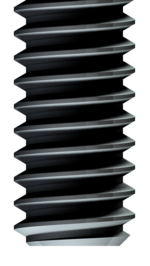 The thread is a profiled notch that runs continuously helically (i.e. as a helical line ) in a cylindrical inner or outer wall. This continuous depression is called a thread on a screw or in a nut . It is a modification of the inclined plane , with a translation of a circumferential force into a larger longitudinal force, e.g. B. in screw presses , wine presses and jacks.

In some cases, the mating thread is created when first joining. Examples are self-tapping screws or self-tapping nuts , sheet metal screws , wood screws and chipboard screws .

Threads can be generated without cutting ( forming ) or cutting ( thread cutting ) . The non-cutting processes are common in mass production and are preferred because they combine technical advantages (smooth surface, increased strength, unbroken material fiber) with high efficiency (no loss due to chips to be disposed of). Threads are cut primarily in parts that have already been machined (e.g. turned parts , milled parts ).

Die M8 for the production of external threads

Set of three M5 taps for the production of internal threads

Distinctions of the threads

also nut thread, see also nut (technology) ; a distinction is made between continuous threads and blind hole threads that do not reach the opposite side. Counter shape: external thread

A threaded rod has no tool attacks and is just a rod with an external thread. Threaded rods are set in concrete, for example, in order to subsequently fasten an object to the concrete base. Longer pushing and pulling work can also be carried out with rotating threaded rods.

Direction of rotation of the thread

When right-hand thread or right-rising threaded run when viewed in the adjacent image to the thread flanks from left to right (top). The threads run into one another by turning clockwise .

In the case of a left-hand thread or a left-hand thread , the thread flanks run from right to left (top) when viewed as in the adjacent picture. Left-hand threads are identified in production drawings and in logistics with the letters LH (for L eft H and), e.g. E.g .: M16-LH. The screw head of slotted screws with counterclockwise threads is marked with a transverse groove in the watchmaking trade - a cross appears on the screw head.

The threads run into one another by turning counterclockwise. Left-hand threads are used: 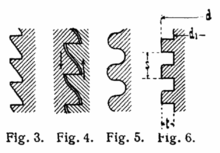 Inch system : Inch thread - according to the UTS standard ( Unified Thread Standard ) in countries thatmeasurethe length in inches (e.g. USA ). Inch threads are common around the world in house installation ( Whitworth thread ), in some areas of precision engineering (for example on tripods and computer housings ) and in aviation.

Shape of the thread flank

The following forms of thread flanks are common:

Thread according to DIN standards

Milk thread (see DIN 11851 and DIN 405) is a metric round thread with a coarse pitch to make cleaning easier.

The binding definitions of the thread parameters are specified in DIN 2244 and ISO 5408, regardless of the thread type. Both norms are almost identical.

In addition, a basic distinction must be made between the nominal dimensions and the permissible limit dimensions. So has z. For example, the pitch diameter of the metric ISO standard thread M16x2 (for external and internal threads) has a nominal value of 14.701 mm, but the corresponding external thread must have a pitch diameter between 14.503 and 14.663 mm with the usual external thread tolerance zone 6g.

largest diameter of the thread geometry.
In the case of a thread (in the following example a metric) M 20 , the number stands for a nominal diameter of 20 millimeters.

Diameter (d 2 for external threads or D 2 for internal threads) of an imaginary, geometrically ideal circular cylinder (flank cylinder) which cuts through the thread profile in such a way that the widths of the resulting profile valleys (empty spaces) and peaks (teeth) are the same.

With metric threads, the path that is covered by one revolution. In other words, the distance between two thread peaks in mm (previously referred to as the pitch ).
In the case of inch threads, on the other hand, the value of the pitch denotes the number of threads on the 1 inch route ("tpi" = threads per inch).

The pitch angle is obtained by calculating the arctangent of pitch / (pitch diameter * ). With the ISO standard thread, this angle is around 3 ° for M6 and around 2 ° for M20.

In the case of multiple threads, the division is the distance between two thread notches.
The division is usually the slope divided by the number of gears.
Example: The designation Tr 60 P20 means trapezoidal thread with 60 mm diameter and 60/20 = 3 threads, as well as a distance of 20 mm from thread to thread.
In the case of single-start threads, the pitch is equal to the pitch.

see shape of the thread flank

The flank angle is measured between the mutually facing flanks of two adjacent threads.
With normal thread it is 60 °. It varies from 0 ° for the flat thread , up to 80 ° for the steel armored pipe thread .

Fine threads (e.g. M6 × 0.5 mm) are threads with a low pitch
Find z. B. Use on adjusting screws of measuring devices. The low feed per revolution allows precise settings. The thread profile is reduced in proportion to the pitch.

In the first case, the inside diameter of a banjo bolt can be increased and / or a thin-walled nut can be used. The thread profile is smaller, but the load is absorbed by several turns. This multi-start thread has on the whole the same pitch as a single-start standard thread with the same outside diameter.

In the second case, the thread profile is retained, but the pitch is increased. The space not required by the profile is filled by a second or further thread turn. You get "quick screw connections", a certain stroke can be reached with fewer turns or in a shorter time. Power amplification and self-locking are smaller than with the standard thread because it is inversely proportional to the number of threads.

The screw caps of canning jars are a typical application of a multi-start thread. The thin-walled cover in particular requires a small thread profile that creates space for additional threads. The higher number of threads also has the advantage that there is more than one point around the circumference where the thread begins to “grip”. There is usually no high-helix thread. The pitch is the standard pitch belonging to the large thread diameter here. It is so large that such a lock can be operated quickly. This is also aided by the fact that, as a rule, no more than one rotation between closed and open has to be provided. The self-locking is retained.

Real multi-thread quick-release fasteners are used when the thread diameter cannot be increased. They can be found on bottles for cosmetics or drinks and on high-quality filler caps. The self-locking required for reclosing can be achieved through additional measures (for example with snap connections or well-adhering surface coatings on the lid). The thread pitch and thus the self-locking is also dependent on the diameter and the width of the thread. Therefore, multi-start threads with threads that are narrow in relation to the diameter can be self-locking even without additional measures.

In gas and water installation technology, pipe threads are usually used to produce detachable pipe connections . The parameter is given in inches. This originally referred to the inner diameter or the nominal nominal diameter (DN) of moderate threaded pipes. In order to ensure the compatibility of the threads, light and heavy threaded pipes have the same outside diameter despite different wall thicknesses and different inside diameters despite nominally the same nominal width.

Due to the need to keep the outer diameter, naming the thread according to nominal size or inner diameter is confusing:

The most common pipe threads are sealing in the thread, they are designed as cylindrical internal threads and tapered external threads with dimensional overlap in diameter.

On the American continent, on the other hand, the US NPT ( National Pipe Thread ) is used. For NPT threads, the dimensions include the diameter coding and the number of threads on an inch.

Due to the different number of threads per inch and minor differences in diameter, BSP and NPT threads cannot be completely screwed together. This becomes noticeable when the thread cannot be screwed in at all or only a few (few) turns.

Designation examples for threads sealing in the thread:

Designation examples for threads not sealing in the thread:

(A, B for the tolerance class)

Outer pipe threads are often  roughened - especially with brass parts - so that the hemp or the sealing tape for sealing holds better in the thread when screwing in and does not shift when screwing in.

An armored steel pipe thread (formerly also a PG thread) is used to screw cable laying pipes in electrical installations. Since the pipes are relatively thin-walled, the thread depth must not be very large.

The representation of the external thread (bolt thread) and internal thread (nut thread) is different in the technical drawing. The following applies to the top view:

The following applies to the side view:

If a bolt is shown in a nut thread in the drawing, the illustration of the bolt has priority (see also ISO 6410-1).

Usually threads are used that are subject to international standardization . There are now and then manufacturers who use threads that deviate from the standard for various reasons. This can be due to safety or construction reasons or for reasons of competition, so that you definitely have to use original spare parts .

Dimensions of the common threads and general designations can be found in books of tables or in standards that are available for a fee .

Slope error
Wobble
The wobble error is the pitch error measured on a gear.
Form defects
The form error describes the deviation from the theoretically exact thread form. The theoretically exact shape of the thread can be obtained by cutting a thread at the helix angle. In almost every type of thread production, a form defect remains.
Flank surface defects
The surface of the flanks does not have the desired roughness depth (is too rough), so that the screws seize in the area of ​​the thread and can no longer be loosened (this can happen with very large threads that are exposed to very high pressure).

The following important information is missing from this article or section:
There is a great deal missing about the history and development of threads. When did wood come, when did metal. When did threads become common? Etc.
Help Wikipedia by researching and pasting it .

The Archimedean screw has a helix. It is around 200 BC. Proven in ancient Egypt and was used for irrigation. A pairing of internal and external threads is not implemented here.

In Central Europe, threads appear as a pairing of internal and external threads in numerous illustrations of tree presses, the background of these illustrations is the biblical motif "Christ in the wine press". It is likely to have consisted of wooden threads, as they were still in use in such presses in the 19th century. The earliest of these images (frescoes and miniatures) date to the 12th century, but there are no references to other uses of such threads for the next three centuries. A wooden spindle is shown on a picture of a heavy-duty crane by Francesco di Giorgio . The picture should have been made around 1480.

Around 1800 Henry Maudslay improved the lead screw of the lathe in such a way that the separate production of external and internal threads became possible. Until then, the screw and nut pair was always a non-interchangeable unit. In the case of machines, these pairs have been marked to keep track of things. Maudslay started with the standardization of the thread.

Joseph Whitworth (1803–1887) built on this. After systematic investigations, he determined the flank angle of 55 °. Together with the pitch, there was now a reliable standard for the pairing of external and internal threads.