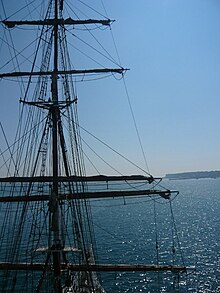 Masts and standing rigging of a rigged sailing ship

When standing rigging or Stag those parts of the rigging of sailing ships or boats, which boasts referred to as bracing to stiffen the poles serve. The name is explained by the fact that these are usually not moved during maneuvers . There are, however, exceptions to this rule, such as backstays or additional forestays, which are set when necessary (and are therefore definitely "movable"). Thanks to these guy lines, masts (including these guy lines) can be built more easily, are guyed stiffer and more resilient.

Masts without standing rigging can therefore only be found on smaller dinghies with only one sail; The condition is that they are rigidly anchored in the fuselage. The simplest mast construction, for example in the Sportyak II, is a steel tube that is supported in a hollow in the bottom of the fuselage and is lashed at its tip by 3 steel cables to the bow and side walls at an angle downwards so that these cables roughly form the edges of an equilateral three-sided pyramid .

In addition to the standing rigging, there is the moving rigging , i.e. the rope that is usually moved. - The plurality of Stag is optionally Stage or shrouds .

Some Stage can serve at the same time in addition to the tensioning of the poles for mounting of sails, for example forestay, inner forestays ( cutterstay , s. U.) Or Besanstag .

The masts commonly used in yacht construction today, which are relatively flexible, allow the sails to be trimmed using the tension of the standing goods.

The first stage consisted of natural fibers such as hemp , sisal or coconut . Wire ropes were also used later, chains were only used for a few parts of the standing goods, e.g. B. for the bowsprit ring that supported the bowsprit towards the bow. The standing rigging is still partly dressed and clad on traditionally sailed ships in order to be better protected against the elements. In this case it appears dark brown to black in contrast to the running good.

Today's yachts usually use wire ropes or round rods (so-called rod rigs ) made of stainless steel. Modern regatta yachts have recently started using high-strength ropes made of synthetic fibers or rods made of CFRP . 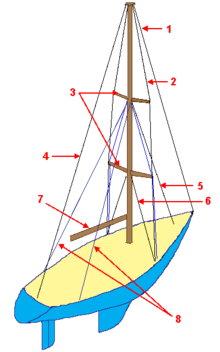 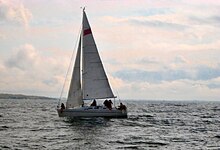 Headsail on a cutter day on an Elan yacht ( Glénans ), to the left is the forestay

As Stage all bracing are referred to in the longitudinal direction of the ship. On ships without a backstay, a stay also means a forestay.

The stage in detail

The shrouds support a mast or a bar mainly transversely on both sides, but also more or less aft, depending on the design.

Small boats have only one pair of shrouds, larger ships have several pairs. On the deck, the shrouds are attached using so-called chucks . You can use them to regulate the shroud tension. To improve the pulling direction of the shrouds, spreaders  (3) spread them from the mast. Apart from the supporting function, the deflection of the mast can be checked with the shrouds (if necessary at several points).

For small ships, the shrouds are referred to as top shroud , upper shroud  (2), middle shroud / intermediate shroud and lower shroud  (6), depending on the point of attack on the mast .

On older tall ships from the late Middle Ages, loom lines for climbing the mast are attached between the shrouds . Until well into the 20th century, the shrouds were tensioned with rigging by juffer or maiden , then with tensioning screws. In order to get the largest possible angle to the mast to be supported, the shrouds were spread by means of scaffolding - horizontal boards attached to the outboard. Some ships also have the outdated designation courtyard ropes or courtyard shrouds . Hoft or Hofd is linguistically related to main (in the sense of something main, important, thick, strong) and want to wall .

The guys stabilize the stanchions against lateral and stern forces and are attached with their lower end at deck level near the ship's side. In this way they differ from the shrouds, which are attached further forward and mainly absorb lateral forces.

The distinction between the terms backstay , backstay and shrouds from each other in particular on ships without masts sometimes difficult, partly because of parallel, uneven developments. All three generally support a mast laterally and to the rear, the differences lie in details that are not always clear. So z. B. a Wanttau running far back on one ship as Want, on another as Backstag, on a third as Pardune.

The dimensioning, i.e. the strength of the lines or ropes required in the standing rigging, depends on the size and type of the yacht. Rigid rigging - i.e. one in which the mast should move as little as possible - must be larger than elastic rigging, whereby the desired rigidity usually also depends on the preferences of the skipper and can be adjusted using the turnbuckle .

According to seamanship , the rule of thumb is that all shrouds on each side of the boat should have a breaking strength that is at least one third greater than the total displacement of the yacht. In exemplary calculations, Püschl arrives at values ​​almost exactly in this order of magnitude.

Today yacht designers have extensive calculation models at their disposal, with which the forces on the rigging and on every part of the hull can be calculated very precisely on the computer. However, this sometimes leads to too precise dimensions and too small safety margins to be included for reasons of cost. Once the forces that occur have been determined, the appropriate steel cables must be selected. The material must remain in the elastic range even under maximum load, i.e. it must automatically return to its original shape after the load.