Names of the parts of a simple sailing boat

Sailboat with some heeling (leaning)

A sailboat is a pleasure craft that is primarily powered by wind power . It differs from the sailing ship in its smaller size.

Sailboats can be divided into dinghies (these are dimensionally stable ) and keelboats ( stable in terms of weight ) and, on the other hand, into monohull and multihull boats ( e.g. sailing catamarans ). Weight Stable sailboats, which also also a living room with bunks have and kitchen are often called Yacht (also - yacht ) referred to, especially when they are about 10 meters longer than. Boats with bunks and a kitchen shorter than 10 m are also called daysailers . A Daysailer can be both a keel boat and a dinghy or a keel boat be.

Sailboats usually only have one mast on which sloping sails are guided. However, there are a large number of construction types that differ, depending on the area of ​​application and the associated requirements, among other things in terms of their size, construction, building material and rigging :

For regatta purposes, sailing boats are divided into boat classes that regulate the structural characteristics of a boat type to a greater or lesser extent. For regattas, it is also specified how many sailors must or may be on board.

All design features affect the sailing characteristics of a sailboat. The term "sailing properties" (always in the plural, as it cannot be differentiated from one another) describes properties such as the achievable speed at a certain wind strength, the heeling that occurs in the process or the maximum height on the wind.

Light sailing boats, such as dinghies that have a retractable sword, can be sailed in a sporty way and react to the smallest gusts or steering movements of the helmsman. Dinghies and dinghy cruisers are mainly sailed on inland lakes and marginal seas due to their shallow draft and their limited suitability for heavy weather.

At sea, on the other hand, keel boats are mostly used because they are much more stable. The weight of the keel gives you a higher righting moment, which counteracts the pressure of the sails, making overturning much less likely. Classic keel boats with long keel react much more slowly to gusts of wind or steering movements. Thanks to knowledge from fluid mechanics and new boat designs, keel boats can also be sailed sportily.

Particularly large sailing yachts are sometimes called maxi yachts . These are often commissioned by very rich people for representation purposes. The longest sailing yacht in the world is the SY A with a length of over 142 meters.

A sailing boat is propelled by a combination of wind pressure on the sails, the air flow around the sails and the opposing resistance of the lateral plan in the water. From a physical point of view, this is a vector addition of several forces acting on the boat, which, depending on the course to the wind, require an adjustment of the sail position and the sail trim . In order to counteract excessive heeling or capsizing in the event of strong lateral winds , the crew of a dinghy changes the center of gravity of the boat by shifting their weight. Dinghies used for sport are often equipped with a trapeze for optimal weight trim . In keel boats, the keel takes on this task, whereby the weight of the crew is also used here in sporty sailing.

From a certain size sailboats can be equipped with a motor to lulls to bridge or to be maneuvered around the harbor. For smaller boats this is often an outboard motor , for larger boats a built-in motor. Dinghies have paddles for this purpose . The power of the motors used is very low compared to land vehicles of the same weight, because it is not necessary to motorize sailboats more than is sufficient until the hull speed is reached. Today, built-in engines are almost without exception diesel engines , as they are considered to be safer with regard to leaking fuel vapors.

As in shipping in general, many technical terms are also used in sailing (see list of nautical technical terms ). The most important technical terms for the parts of a sailing dinghy (small sailing boat) are in the following table, together with a brief explanation of the function. The corresponding English names, as they are common in international usage, are also listed.

Parts of a sailing dinghy, explanation see table on the left

The traditional boat building material for sailing boats is wood , which is given a protective coating with varnish. Since the middle of the 20th century, other boat building materials have predominantly been used. Modern sailboat hulls are made of glass fiber or carbon fiber reinforced plastic or of steel or aluminum . The same is true of masts and trees .

Shrouds and the stage, the so-called standing rigging , are now mostly made of stainless steel ropes, the lines for operating the sails, the running rigging, are made of synthetic fibers.

Even the sails , which used to be made of linen or cotton , are now made of synthetic fibers or foils.

While dinghies use a sword to counteract the drift, there are essentially two types of keels for sailing yachts . In contrast to the sword, a keel is very heavy and thus counteracts heeling . Another difference is that swords can be brought up to reduce draft and drag, while lifting keels are the exception. The keel or the sword generates a hydrodynamic lift to windward on close -wind or half-wind courses and thereby enables cruising against the wind. As a simplification, one can imagine that the large area of ​​the underwater hull is intended to prevent or reduce drifting to the side caused by the wind .

Classic yachts usually have a so-called long keel , which can make up to three quarters of the ship's length. More modern yachts, on the other hand, are almost without exception built with a short fin keel , at the lower end of which there is often a keel bomb as additional weight .

In modern regatta yachts in particular, swivel keels are increasingly being used, fin keels that can be displayed at right angles to the ship's axis. Swivel keels optimize the weight distribution when the yacht heels and enable, in relation to similar ships with a rigid keel fin, the reduction of the total weight.

A special case are the so-called chimney keels, short fin keels that attach in pairs to the sides of the fuselage. They allow in waters with pronounced tides , the drying up because the yacht can stand on two Kimmkielen. Yachts equipped in this way are called chimney keelers and double keelers. You rarely see ships with a third keel between the two keel keel, so-called three- keel .

Sailing yachts usually have one or two masts. They are sailed almost exclusively with Schratsails . These come in the form of staysails, high sails , spriet sails, lug sails or gaff sails . 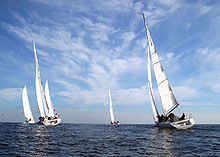 Slopes (one- masted sails) during a regatta

Slopes are rigged in different ways . The mainsail is designed as a high sail in almost all cases. The foresail can use the entire height of the mast or only start below the top of the mast ( mast top ).

Sailing yachts with more than one headsail are called cutters . Usually, in addition to the mainsail, cutters usually have a jib and jib as a foresail . The mainsail can be designed as a high sail or as a gaff sail (gaff cutter).

In the case of two-masted sailing yachts, a distinction is made between schooner , ketch and yawl based on the rig .

In schooners , the aft (rear) mast is higher than the front (or both are the same height); the aft mast is therefore referred to as the main mast , the front one as the foremast . Often part of the Schonerrigg a bowsprit . As the schooner rigging is uncommon for new buildings today, savers are mostly with the formerly common gaff-rigged provided.

A further specification of the rigging is possible via the type of mainsail (gaff schooner, square sail schooner). A topsail schooner can carry an additional sail over the mainsail (the so-called topsail).

With ketches and yawls , the aft mast is smaller than the main mast in front, which is called a mizzen mast . With a ketch, the mizzen is inside the waterline, with yawls outside (that's why the mizzen is often so short with yawls that one speaks of one and a half masters). Here, too, a jib boom can complement the rig. Modern ketches often drive high sails (Bermuda sails ), but in the past gaff ketches and other rigging were also common. Here, too, a specification based on the mainsail type is possible.

The number of headsails on ketches and yawls can vary, but often increases with the size of the ship.

Sailing yachts of the mega yacht class mostly fall back on the sails of historical sailing ships or look like an oversized version of a sloop or a cutter. Exceptions are multi-mast schooners such as the spectacular, highly rigged four-mast schooner Phocea .

In addition to the rigging and sails, sailing also includes various other equipment. Various lines, such as halyards and sheets, are required to operate the sails . The larger the boat and the sportier it is to be sailed, the more additional lines are available for optimal adjustment of the sails. In modern boats, all lines end in the cockpit , where they are easily accessible. In older boats, the traps are operated from the mast, which has the disadvantage that someone has to go there to haul in the sail, which is difficult and not without danger in rough seas. To operate the lines there are winches in the cockpit so that the great forces that arise can be mastered.

At the edge of the deck of a sailboat there are cleats so that the boat can be moored on land with lines. A railing is attached above it to prevent falling overboard.

The safety equipment of pleasure craft is prescribed by the state under whose flag it sails or, in the case of national waters on which it moves. This includes, for example, a sufficient number of life jackets or fire extinguishers. Carrying an anchor is also required from time to time.

On sailing yachts you can find a lot below deck that is also used for camping : gas or petrol stoves with kitchen equipment, bunks for sleeping, and wet rooms with toilets are now part of it. As a special feature on ships, the mostly available navigation table should be mentioned. This is the space reserved for map work and where there are often radio devices, GPS with chart plotter and the electrical distribution for the lights.

The equipment must be well secured for the journey. Equipment flying through the cabin in rough seas is dangerous and often fragile. Yachts can be out for days or weeks without calling at a port. The equipment must therefore also be usable while sailing. Hobs are therefore usually gimbaled so that they remain in the horizontal even when they are tilted and no food spills out.

The equipment also includes a set of suitable tools and spare parts for the most important components (spare lights, fuses, engine spare parts, sail repair kit), because breakdown service is not available in the middle of the sea.

Under classic yachts understands yachts built before 1970 in wood, steel or aluminum, and are located in a largely original state of preservation or were accordingly restored. Classic yachts that have modern equipment (fittings, rigging, carbon sails) that were not available at the time this classic yacht was built are also called vintage yachts. The Friends of Classic Yachts are organized in Germany in the Friends of Classic Yachts .