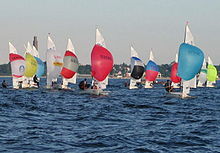 Regatta sailing is a competitive sport in which a previously agreed route is driven by two ( Match Race ) or more ( Fleet Race ) boats at the same time. The duration of a competition can be from less than an hour to months in deep sea regattas (for example The Ocean Race ). There are usually several races in a regatta, the individual results are summarized according to a prescribed procedure and the winner is determined. Regattas are held according to the racing rules for sailing by World Sailing (formerly ISAF), the world association of all sailing sports.

An announcement is published before a regatta . The advertisement fulfills the purpose of an invitation. It must therefore describe all the conditions that a potential participant needs in order to decide whether to participate. When registering shortly before the regatta, the sailors receive sailing instructions that specify additional provisions (e.g. the lanes, special signals and special rules) for the basic racing rules.

The cost for the exercise of the sport are very different: a team at the America's Cup needs a million budget to be able to participate at all, while in dinghy classes such as Optimist , Laser , Europe , 420 , 470 , Pirate or keelboat classes such as H-Boot or Kielzugvogel with already national and international successes can be achieved by normal means. In addition to the cost of the boat, insurance and transport, registration fees must be paid for regattas.

In professional offshore regattas, the focus is absolutely on speed, which in spite of all safety measures in the event of mistakes also means danger to the life of the crew. In dinghy regattas, which do not have to be less demanding in terms of sport, there is always a certain risk of accidents, but the risk is significantly lower. Usually, depending on the number of participants and the weather conditions, several belay boats are used to enable rapid intervention in an emergency. These can be their own boats used by the organizer of the regatta, but if necessary and if possible, the support of existing rescue organizations, such as water rescue service , DLRG etc., is used. 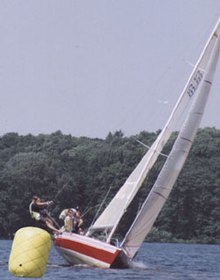 Smaller keelboats and dinghies are mostly so-called unit classes (or one-designs). These boats have identical hulls , masts and, in some cases, identical sails and large booms and are subject to strict restrictions with regard to equipment. The aim is to offer all participants in a regatta the same starting conditions.

In the case of larger yachts, however , the number of boats is usually far too small to have sufficiently large starting fields. Different boats have to sail against each other here. In order to make the competition fair, there are so-called compensation formulas according to which the speed potential of the boats is either calculated theoretically in advance ( IMS , IRC, ORC ) or determined from empirical values ( yardstick ). Every boat receives an individual value with which the sailed time is corrected at the calculated time. This time is then relevant for the evaluation. The first boat to cross the finish line is therefore often not the winner, as a slower boat may have performed better after the calculated time.

Another possibility to let different boats sail against each other are the so-called construction classes. Here a certain framework is given and a certain formula is developed. Values ​​such as displacement of the boat, draft , length, sail area, etc. are included in this formula . The result of the formula must then not exceed a certain value.

The designer must now try to get the best out of the formulas. B. decide whether it can be advantageous to increase the sail area, even if the keel ballast has to be reduced in order to remain within the formula restriction.

Examples of construction classes are the “meter boats” such as 12, 8, 6, the one-ton, half-ton and quarter-ton trucks of the 1970s, but also the modern America's Cup yachts. The 12-meter (actually 12-meter racing yachts) are by no means 12 meters long, only the result of the measurement formula, in which the dimensions of the boat have been inserted, must not exceed 12 m. 12s are typically around 20–22 m long. The same applies to the ton trucks and other construction classes. Further construction classes are the dinghy cruisers 10 m² (C), 15 m² (P), 16 m² (S), 20 m² (R) and 30 m² (B). The minimum and maximum length and width, the total minimum weight and the measured sail area are determined here.

The following competitions were held at the 2008 Summer Olympics in Beijing :

The following competitions were held at the 2012 Summer Olympics in London :

The IOC had modified the competition program compared to London 2012 . For example, the keelboat classes were canceled for women and men : For women, the Elliott 6m class was replaced by the 49erFX class , while the Star class for men was canceled without replacement. New to the program was the Nacra 17 class , which was held in mixed competition. The crew of two consisted of a woman and a man.

The following competitions were held at the 2016 Summer Olympics in Rio de Janeiro :

To get an overview of the boat classes in sailing that have so far been permitted at the Olympic Summer Games, see: List of Olympic champions in sailing .

Fixed tracks and tracks according to the wind

The lanes to be sailed can be routes that lead to geographically fixed points. Often there are no suitable fixed points (islands, sea marks, etc.). Then such points must be artificially created by floating (and mostly also anchored) objects (fixed paths).

If these objects (usually so-called regatta buoys) are only laid out shortly before the start, they can also be positioned so that the connecting lines have a certain orientation to the current wind direction. The buoys are then usually laid out in such a way that one of the connecting lines is in the direction of the wind (tracks following the wind). 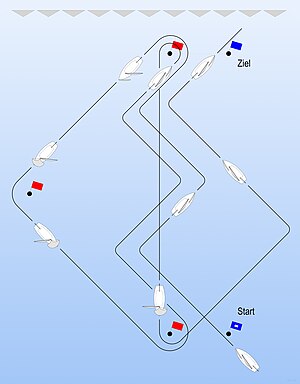 Almost all sailing regattas used to be held on a triangular track ("Olympic triangle", but is no longer used in the Olympic Games), which is laid out with the help of three buoys . The track is aligned with the wind.

The buoys are usually designated with the numbers 1, 2 and 3 in the track plans in which the tracks are visually represented.

The first buoy or leeward buoy (3) usually forms the starting line together with the starting ship. The starting line is laid out roughly across the direction of the wind . The second buoy or windward boat (1) is directly downwind from the start line, so that the boats have to cross to this buoy . The third or space buoy (2) lies at right angles to the line connecting the other two buoys. The distance between the buoys (and thus the length of the track) depends on the boat class , the wind conditions and the desired duration of the race. The buoys are rounded several times, usually three times, the space buoy being omitted in the second round, for example start 1-2-3 -1-3-1-2-3-Ziel. The finish line is then usually formed by the windward buoy (1) and the starting ship, which has to go from the leeward buoy to the windward buoy during the race.

In order to be flexible, the windward or leeward buoy is often not used for the start and finish line, but extra buoys are deployed to delimit the lines and sometimes a separate target ship is used. The special start and finish buoys then usually carry orange flags.

Today boat classes that do not have a spinnaker usually run this triangular railway .

At the America's Cup , catamarans and most dinghies and keelboat classes with spinnaker or gennaker , the up-and-down run has prevailed. This path is also aligned with the wind.

After the start, the boats sail to the windward buoy (1), from there half wind to a so-called drain buoy (1a), depending on the boat class, and then before the wind back to the leeward buoy (2). This mark is often replaced by a gate consisting of two buoys located close together (Leetor, 2s and 2p). The boats must sail through this gate. You can round either of the two buoys.

This path is circled several times (one to three times) and then sailed to the destination, which, depending on the class and sailing instructions, is close to the windward or leeward buoy. The starting line, on the other hand, is always on the leeward side of the runway, so that initially there is a cross course.

If two or more classes are to sail, a trapezoidal track is increasingly being laid out in which two different courses can be sailed and thus the classes are less likely to interfere with one another. ("Innerloop" and "Outerloop") On the outerloop course, a buoy located in windward direction is first approached after the start, followed by a space section to a second buoy, from there in front of the wind to a third (lee) buoy, then against the wind again to the second buoy, back to the third leeward buoy and with a clear wind to a fourth buoy, which in turn is lee of the start / finish ship. From there a cross course leads to the goal. In the inner loop course, however, the "loop" is sailed around the first and fourth buoy. In principle, a trapezoidal path consists of two windward / leeward paths lying next to each other with only one start line and one finish line.

Regattas that take place in or partially in Germany

Major regattas taking place in and around Great Britain and Ireland

Major regattas that take place in the Mediterranean

Other important regattas in Europe

Regattas across oceans or around the world

In addition to one-off regattas, the following recurring regattas lead or lead across the Atlantic:

Regattas around the world

Regattas at different locations around the world