The title of this article is ambiguous. See Isle of Wight (disambiguation) for additional meanings .

The island is roughly shaped like a diamond . Today it is separated from the British mainland by the Solent , an inlet of the English Channel . Until 6000 BC It was part of the mainland and the Solent was a river. Geologically, the island belongs to the southern English chalk formation . The landscape features are the chalk hills that stretch across the entire island in the center, but at the western end of Wight in front of The Needles , three limestone cliffs protruding up to 30 m from the sea, drop steeply into the sea. Much of the island is specially protected as the Area of ​​Outstanding Natural Beauty (AONB).

Historical map of the Vectis Insula

There are traces of a Mesolithic and Neolithic presence on the island, which is reflected in artifacts . From the Bronze Age are burial mounds present, the findings in the form of daggers and axes provided. The hill fort on the "Chillerton Down" is regarded as an Iron Age settlement . Celtic Belgae came to the island when they evaded the Roman conquest of Gaul . Gaius Suetonius Tranquillus , called Suetonius , describes the conquest of the island, which the Romans called Vectis, in AD 43 by Vespasian . The foundations of eight country houses have been preserved from Roman times, the best at Brading and Newport.

After the Romans withdrew, the island and southern Hampshire on the opposite side of the British main island were settled by Jutes . The Isle of Wight had close cultural ties with the Kingdom of Kent, which was also Jutland . According to the Anglo-Saxon Chronicle , the island fell to the West Saxons Cerdic around 530 , is an unhistorical legend.

The jütische settlement in the Dark Ages (Dark Ages) was confirmed by archaeological finds of the excavated in the 19th century cemeteries "Chessell Down" and "Bowcombe Down". In addition to skeletons, iron swords, knives and jewelry such as brooches and buckles were found.

Wulfhere of Mercia took to 660 the successful campaign against the Isle of Wight and in the meantime to Wessex belonging Meonwara (valley of the River Meon, southeastern Hampshire). Both provinciae (provinces), which previously formed a "buffer zone" between the kingdoms of Sussex and Wessex, he subordinated to his subordinate King Æthelwalh of Sussex.

In 686, the West Saxon King Caedwalla conquered the pagan small kingdom under King Arualdus (Arwald). He was powerless against the overwhelming strength of the troops from Wessex and, like his two younger brothers, died in the fighting in which a large part of the island's inhabitants were slaughtered. Caedwalla had the island repopulated by West Saxony and gave a quarter of the conquered land to the church. From then on, the Isle of Wight was a "province" of the Kingdom of Wessex. In the Viking Age , the island was the target of raids several times and also served the Vikings as a base for a time.

The enfeoffment of William the Conqueror to the FitzOsberns was followed by a quiet period that ended in 1293 with the island falling back to the Crown. During the Hundred Years War the island was devastated several times by French troops. 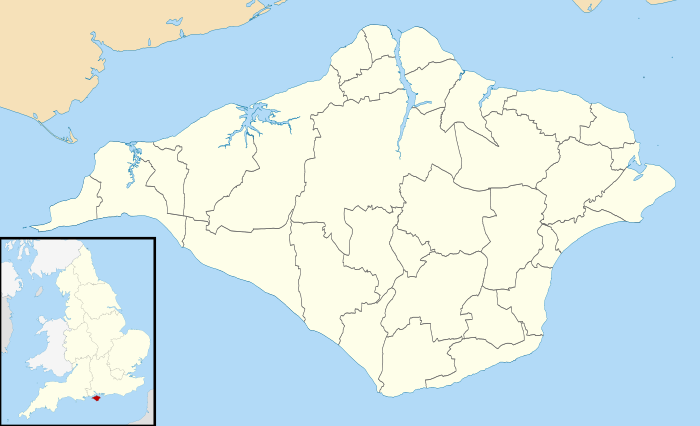 The Isle of Wight is crossed by two rivers that have their source in the southern part of the island. The River Medina flows north through the capital Newport in the Solent near Cowes . The Yar River runs parallel to the medina to the center of the island and then flows east into the sea at St. Helens. There is also the smaller Blackbridge Brook with its confluence with the Wooton Creek between Wooton and Fishbourne .

Simply called " the island " by the inhabitants , there are various boat connections to / from it.

There are airfields for smaller aircraft in Bembridge and Sandown.

There is a dense road network on the island itself, which is particularly frequented in the holiday season. Because of its proximity to the mainland, the island is a popular destination for the British who specifically visit the coastal towns of Ryde, Sandown, Shanklin, Ventnor and Freshwater , but also various smaller towns such as B. Enjoy visiting Godshill in various areas.

The island is crossed by a very well developed bus network from Southern Vectis . The so-called Rover Ticket is the cheapest way to explore the island.

The Isle of Wight has one of Britain's shortest railway lines. The Island Line ("Island Line") runs just 13.6 kilometers from Ryde Pier Head to Shanklin in the east of the island. Old trains of the London Underground , some of which were built in 1938, run on this route. Nevertheless, the railway company is said to have the highest reliability of any British railway company.

The most important event of the year is the world-famous sailing regatta. The Cowes Week attracts every August hundreds of thousands of visitors to the island. Other major sailing events in Cowes include the start of the Admiral's Cup in July and the Commodores Cup in August.

A famous rock festival - the Isle of Wight Festival - took place near Tennyson Down, West Wight in 1970. Here played among other The Doors , The Who , Miles Davis , Leonard Cohen , Jimi Hendrix and Supertramp . This festival was preceded by two smaller events in 1968 and 1969, which were also attended by John Lennon and Yoko Ono . A revival took place in 2002.

It has been a regular event for a number of years now, showcasing bands annually and has become one of the UK's premier festivals.

Another regular festival is the IOW Jazz Festival and the IOW International Scooter Rally, the largest motor scooter meeting in the world. 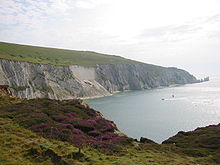