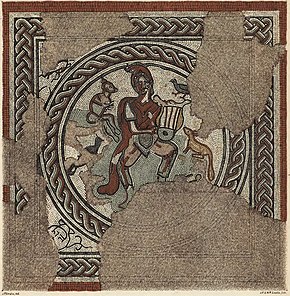 The villa rustica of Brading is a Roman manor ( villa rustica ) in the district of Brading , a town on the Isle of Wight ( Vectis ), England . Most of it has been excavated and can be visited. It is remarkable for the rich array of mosaics .

The first traces of settlement date from the pre-Roman Iron Age . The first wooden house and a small bathroom were built here in Roman times. The large villa, furnished with mosaics, dates from the fourth century AD. It stood on the west side of a large enclosure. Agricultural buildings stood on the north side of the courtyard. There were apparently stables here, but also living quarters. There were workshops on the south side of the courtyard. The whole complex was walled and in use until the fifth century.

In ancient times , the villa was on a lake, but it has been drained in modern times.

The buildings of the plant

Plan of the main house of the villa; red: rooms with mosaic

Bust of a season

There is evidence of settlement on the site of the villa from pre-Roman times and it can be assumed that this settlement continued uninterrupted until the time of Roman rule. The first safe construction on the site is a 25 × 15 m hall made of wood. On both short sides of the hall there were two somewhat smaller stone buildings. The one in the west was a small bathroom with three rooms. These buildings date to the first century AD. The bath is perhaps a little later and was built in the second century. It was in operation until the beginning of the fourth century. After that it was used as a quarry. A larger, rectangular building with stone foundations was later built on the site of the bath. His dating is uncertain. He may be post-Roman.

At the end of the second century the hall was torn down and a much larger building was erected in the north. This building consisted of two parts. In the west there were various rooms that were arranged around a kind of atrium. Some of the rooms were decorated with wall paintings. Obviously it was a comfortable residential area. In the east, however, was a three-aisled hall. At the end of the third or the beginning of the fourth century, the actual villa was built at right angles to the existing house. Around this time, a large courtyard was also set up. The area in front of the buildings was leveled and a wall was built in the south and east. The old bath in the south of the facility was given up. The old hall in the north received a bathing facility.

The villa is a rectangular building with corner projections on the front, facing east. There is a veranda between the risalits. Behind the porch, in the center, is the largest room in the house, which may have been a lobby. Behind it is another room, which is flanked by two narrow rooms to the north and south. It was probably a dining room that was connected to the reception hall by a wide door. Behind this building are the remains of a simple, rectangular, single stone building, the date and function of which are unknown. It has been suggested that it was a mausoleum, but there is no other evidence. The surrounding wall of the courtyard ran north of the villa. In the surrounding wall are the remains of a nymphaeum . It is a rectangular stone structure (3.4 × 2.7 m) with a semicircular water basin. In the second half of the fourth century there were some alterations; above all, the door from the reception hall to the dining room behind it was made smaller. In a third phase, the middle part of the villa was converted into workshops and for agricultural activities. An oven for drying grain was built into the porch. Various rooms of the villa had hypocausts and were decorated with wall paintings. A well over 20 meters deep was excavated in the north wing, but it was abandoned when the north wing was built.

On the basis of coin finds it can be assumed that the villa was cultivated until the beginning of the fifth century.

Mosaic: man with a cock's head

Mosaic with Bacchus and a man with a cock's head

At the end of the third or beginning of the fourth century the villa was richly decorated with figural mosaics. The dining room received a mosaic with geometric patterns. It was not in good condition when it was found and has now completely disappeared. On the porch floor is a mosailk with a checkered pattern (red and white). In the center there is a medallion with Orpheus playing a lyre. Animals are arranged around him. To his left (as seen from him) is a bird and a canoid , maybe a fox. On the other side you can see a monkey and another bird.

In a room to the south there is a mosaic of Bacchus in the middle and four panels with scenes. When entering the room one saw two gladiators fighting (a retiarius and a secutor ). The panel to the right shows a man with a cock's head and a griffin. Next to it is a house and two griffins follow . The scene is reminiscent of representations in an amphitheater. The image gave rise to various speculations, and it has been suggested that this is an allusion to Emperor Gallus , who is believed to have spent a lot of time in the amphitheater. A more recent interpretation sees the Egyptian-Greek deity Hermes Trismegistus in this figure , who was depicted with an ibis head. The mosaic artist had obviously never seen an ibis and drew a cock's head here. The third surviving panel shows the remains of a house with a dome and a dog-like animal. There were busts in the corners of the mosaic, only one has survived and possibly shows a satyr.

In another room there was a mosaic of the seasons. It is badly damaged and shows Perseus and Andromeda in one of five squares while the others are largely lost. After all, remains indicate that the head of Medusa or Neptunus was in the central field . The corners of the mosaic show the seasons as busts. A small mosaic in a passage between two rooms shows a seated philosopher. The best preserved mosaic in the adjoining room again shows the head of Medusa in the middle. In the adjacent fields you can find scenes from Greek mythology: Achilles and a woman, Lycurgus with Ambrosia , a couple (not identified), as well as Ceres and Triptolemus . The final edge is marine creatures such as nymphs and tritons .

A well-preserved Terra Sigillata bowl was found in the well . Many remains of oxen, pigs and poultry were also found here. This may indicate well sacrifices. When the well was long silted up, three small dogs were thrown into it. Finally, the skeleton of a young man was also found. Various shards of glass came to light, some of which could be reconstructed into vessels. Numerous broken window glass were found. Around 100 coins came to light during the various excavations. A few date to pre-Roman times, others to the first and second centuries under Roman rule. A large part from the third and fourth to the beginning of the fifth century, which is sure to testify that the plant was in operation until the end of Roman rule.

The remains of the villa were discovered in 1879 by Captain Thorp, who was a former army officer and was looking for antiques. Children had shown him finds from the villa, which were in the fields of Mr. Munns, a farmer. Parts of the main house had been excavated by April 1880, but the investigations had to be interrupted for the time being because the house extended into the neighboring property of Louisa Lady Oglander. This now bought parts of the property from Mr. Munns. Archaeologists John Price and FG Hilton Price began digging here in the summer of 1880, but only had funding for one year. An excavation report appeared in 1881. In 1881 John Oglander, a nephew of Lady Oglander, took over the excavations and excavated a large part of the whole complex by 1885. The remains of the main house were roofed over in 1885. In 1994 the villa was flooded and some mosaics were badly damaged. In the following years the remains were roofed over by a completely new building. In 1992, 1997, 2002 and 2003 further smaller investigations took place. Larger excavations were carried out under Barry Cunliffe from 2008 to 2010 , which above all clarified the history of the complex, which until then had hardly been understood. These excavations were published in 2013.