The title of this article is ambiguous. Further meanings are listed under mosaic (disambiguation) .

The Deesis mosaic of Hagia Sophia is a major work of Palaiological-Renaissance and Byzantine art.

Mosaics are already in the ancient species known and popular of Fine Arts , created by combining different colors or different shaped parts pattern or image when it is. Different materials can be used, stone and glass mosaics are classic; in the Islamic Middle Ages, tile mosaics were added. Paper, fabric and leather mosaics are modern ; other experimental forms are also possible. In contrast to inlays , mosaics primarily only use a single, simple form of the imaging particles, mostly small cubes. Mixed and transitional forms are possible.

The word mosaic is derived from the late Latin Musaicum ( opus ) (work dedicated to the muses ). The musical technique is the assembling of different colored flat plates (made of stone, metal, wood etc.) to create decorative patterns. The individual stones are called tessera . The furnishing of a building with mosaics is known as tessellation .

Probably the oldest known human-made mosaic area comes from Homo erectus bilzingslebenensis in Thuringia, who apparently must have pressed some foreign stones and bones into the loess of an almost circular square with a diameter of about 9 m. This pavement-like area was found around 400,000 years ago.

Between the Tigris and the Euphrates , in Mesopotamia near the city of Ur , the oldest mosaics from Sumerian times (approx. 2500–3000 BC) were found. These are pillars made of palm trunks that were coated with asphalt (a mixture of the binding agent bitumen and aggregate ) and decorated with mosaic stones.

Mosaic pins and mosaic stones were also used as material for wall friezes in buildings and as decorations for jewelery boxes, as shown by the column reconstruction of parts of the Eanna shrine in the Vorderasiatisches Museum Berlin and the standard of Ur in the British Museum .

The first mosaics in the Greek world are pebble mosaics. As the name suggests, they are made up of selected pebbles, with black and white dominating. Examples of this are the mosaic with Dionysus on a panther in Pella , the capital of the Kingdom of Macedonia from 330 to 310 BC. And The Beauty from Durrës (Albania), which was created around the same time.

In Hellenism , the pebbles were replaced by specially cut stones. Ancient mosaic experienced its first heyday in the second century BC. During this time, large motifs that could cover the floor of an entire room were produced. The best known example is the Alexander mosaic in the Casa del Fauno in Pompeii ; other examples were found in Delos . 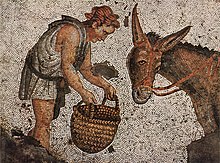 This mosaic from the imperial palace in Constantinople (5th / 6th century) illustrates the high level that the fine arts in the late antique metropolises could maintain for a long time.

Mosaic ceiling in the octagon of Aachen Cathedral

Location Thermengasse in the Roman vicus Turicum ( Zurich ): remains of mosaics with simple black and white decor made of limestone that adorned the walls of the thermal baths

Mosaic from the 19th century in Braunschweig

Detail of a Kosmaten mosaic from the Cathedral of Monreale , Sicily (12th century)

Mosaic in Herculaneum , Neptune and Amphitrite

Mosaics were particularly widespread in the Roman Empire . Many floors and, less often, the walls in residential buildings of the upper social classes were decorated with mosaics. In the first century AD, black and white mosaics were preferred, with geometric motifs dominating. Figurative representations were rather rare and only became more popular in the 2nd century; At the same time, there were also multicolored mosaics, which were particularly popular in the North African provinces and showed their own style. Classical Greek style elements and traditions predominated in the east of the empire.

There are also some older mosaics in Germany that date from the time of the Roman occupation. One of the most famous mosaics is the Dionysus mosaic in Cologne, which was found during shaft work in 1941 and over which the Roman-Germanic Museum was built. The largest Roman mosaic in Germany was discovered in 1852 in the Nennig district of the Saarland community of Perl . The so-called gladiator mosaic measures 15.65 × 10.30 m and shows six figurative fields of images with scenes from the amphitheater between braided diamond stars . It is preserved in place under a protective structure from 1874.

Medieval mosaics are rather rare; The figurative scenes in the former cathedral of Lescar ( Aquitaine ) or the representations of the zodiac in the ambulatory of the former abbey church of Saint-Philibert in Tournus ( Burgundy ) are famous . But also in some Romanesque churches in Cologne (e.g. Sankt Gereon , Groß Sankt Martin ) there are complete or partially preserved examples.

The Islamic mosaic art consists predominantly of abstract-geometric or calligraphic tile mosaics . These were probably developed under the Turkish Seljuks and spread over the entire Islamic world from the 11th century. From the 14th century on, the time-consuming and therefore expensive mosaic production was gradually abandoned; instead, new techniques were developed by means of which the abstract (Islam) or pictorial (southern Europe) motifs could be separated from one another before the final firing process . 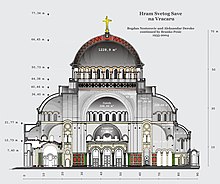 In the Cathedral of Saint Sava in Belgrade , one of the world's largest mosaic furnishings is being completed: all walls over 7.40 m high are to be covered with gold mosaics.

A decisive limitation of the industrially to the hand-made mosaic is the shape of the stones and the guidance of the joint lines. In the artistic and hand-laid mosaic, their course, which helps to create the motif, creates a drawing within the motif and, thanks to their undulating lines that trace the motif, an aura around the motifs, which is what makes a mosaic so appealing in the first place and which are industrially manufactured in the pixel-like arrangement Mosaic is missing.

The German Institute for Standardization describes material surfaces with a side length of less than 10 cm as a mosaic, with more than 10 cm as tiles and from 30 cm as plates. Ministeck is a modern variant of the mosaic.

The mosaic has recently become more important in the arts and crafts sector. Many craft shops are increasingly offering templates and mosaic stones made of materials such as glass, ceramics, clay, marble and with different shapes such as pearls, hearts or stars.

The wall mosaic Frankfurter Staircase by Berlin artist Stephan Huber is located in the Main Tower in Frankfurt am Main .

With a height of seven meters and a length of 125 meters, the frieze of the teacher's house on Alexanderplatz in Berlin, made up of 800,000 mosaic stones, is the largest pictorial work in Europe. The frieze entitled Our Life by Walter Womacka was completed in 1964, renovated in 2004 and is a listed building.

The mosaic technique has recently also been used in computer programs for creating photo mosaics . As the largest mosaic work of art at the moment, a large part of the mosaic design in the St. Sava Cathedral in Belgrade is completed by the Russian Academy of Arts in Moscow under the direction of Nikolaj Muhin . The byzantine gold mosaics of the 11th – 12th centuries Century-like dome mosaic of 1235 m² was completed on December 17, 2017.

The glass mosaic " Sport " by Eduard Bargheer was made in 1962 in the August Wagner workshop. It is located in the Hanover district of Calenberger Neustadt next to the south entrance of the HDI-Arena .