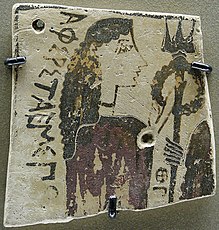 Amphitrite (written: Aphirita) on a Corinthian illustration (approx. 575-550 BC)

Amphitrite ( Greek  Ἀμφιτρίτη ) or Aphrodite Pelagia is an oceanid or nereid of Greek mythology . She is considered the ruler of the seas and was known for her beauty.

Her parents are Okeanos and Tethys . According to other stories, Amphitrite is the sister of Tethys. In certain sources she is mentioned as one of the sea nymphs Nereides and would therefore be the daughter of Nereus and Doris . This is the version presented by Hesiod (Hes. Th. 240ff.). Amphitrite actually wanted to stay unmarried. But Poseidon had his eye on her and pressed her so hard that Amphitrite fled to Atlas and hid from Poseidon with him. Later Poseidon (or Neptune) sent a dolphin as a courtship to Amphitrite, who was able to soften Amphitrite's heart. Amphitrite returned to Poseidon on the dolphin's back, whereupon the gods married. Triton was the first son of this connection.

The writer Robert Graves mentions a free interpretation of this myth , which he postulates as older and interprets the myth of Amphitrite as the penetration of the male priesthood into the formerly supposedly female domain of fishing.

The figure of Amphitrite appears in the intermedia to La Pellegrina , which were performed in 1589 at the wedding of Ferdinando I de 'Medici with Christine of Lorraine ; she was embodied by the famous singer Vittoria Archilei .

Several ships were named after Amphitrite, including one of the oldest seagoing yachts in the world, the German Amphitrite . Amphitrite has also been honored as the namesake in astronomy - for the asteroid Amphitrite and for the hypothetical planet Amphitrite of the early solar system - as well as in biology and philosophy, see Amphitrite .