This article describes the Greek god Poseidon; For the meanings of terms of the same name, see Poseidon (disambiguation) .

Poseidon ( Greek Ποσειδῶν Poseidṓn ) is in Greek mythology the god of the sea , brother of Zeus and one of the twelve Olympic deities , Olympioi. The horse is sacred to him, which is why Hippios ( Latin Hippius ) is one of his epithets.

In Etruscan mythology he was equated with Nethuns , in Roman with Neptune . His crystal palace stands in the depths of the sea.

Poseidon is attested on late Mycenaean linear B clay tablets from Pylos in the sound po-se-da-o as the supreme god. According to Robert Muth , the presence of a festival, sanctuary and priest for Poseidon as well as the sacrifice of Nestor's nine black bulls described in Homer indicate that in the cult of this time there was competition between Zeus and Poseidon, in which Zeus ultimately asserted himself.

There are also typological similarities between Zeus and Poseidon, which support the thesis that both gods originally had the same rank. Like Zeus, Poseidon had lightning as a weapon, with which he had opened the salt spring in Erechtheion and thereby left a lightning mark, it can cause earthquakes just like Zeus and shows a comparable sexual activity with correspondingly large descendants. In Homer he appears only as a bad tempered sea god, but is the only deity that Zeus can challenge in the Trojan War .

According to Herodotus , Poseidon was originally a Libyan god.

Poseidon was god of the Delphic oracle before Apollo took it over and, along with Athena, the patron god of the city of Athens . He was also the patron god of Pylos . In Eleusis he was considered the father of King Eumolpos , in Troizen as the father of Theseus . In addition, there was a cult of Hippios in his honor, since the horse ( ancient Greek ἵππος hippos ) was one of his attributes. In the attic calendar one month he was ordained.

Seafarers prayed to Poseidon for a safe passage and sank horses in the sea for him. When he was in a good mood, Poseidon would create new islands and keep the sea calm and navigable. When he got angry, he stabbed the earth with his trident , causing earthquakes , flooding and causing ships to sink. 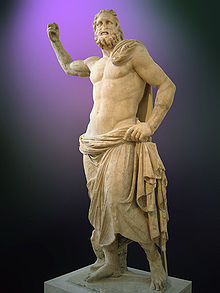 Poseidon is shown with a chariot pulled by large hippocamps . He is often depicted with the trident and dolphins . Sometimes he is shown together with Athena , because he has quarreled with her over the rule of Attica . Often one finds representations of the wedding of Poseidon with Amphitrite , on a chariot, mostly pulled by horses , and accompanied by Triton and Nereids .

In the National Archaeological Museum of Athens is the ancient, 2.09 m tall bronze statue of the “God from the Sea”, often referred to as “ Poseidon of Cape Artemision ” (found at the northern tip of Evia). In the meantime, most archaeologists are of the opinion that this is a statue of Zeus that carried a horizontal bundle of lightning in its empty, raised right hand , since Zeus is the only god with this attribute. Poseidon never held his trident level in the ancient representation. Comparisons of the face shapes with other sculptures of the strict style of the 5th century support this thesis.

Poseidon is the son of Kronos and Rhea . After his birth, his father devoured him, and only his last-born brother Zeus saved him and his other siblings by delivering him. After that, Poseidon held Kronos in check with his trident, while Zeus finally defeated Kronos and the gods of the titans with his lightning bolts. When the world was divided into three parts, Zeus received the sky, Hades (another brother of Poseidon) the underworld, and Poseidon the sea.

Poseidon was married to Amphitrite and had with her the son Triton , the horse Areion and the daughters Rhode and Benthesikyme .

From numerous love affairs - often with sea nymphs ( Nereids , Oceanids ) - further children emerged, such as B. the giant Orion and the one-eyed man-eating Cyclops Polyphemus as well as Phaiax , the progenitor of the Phaiacs , whom the nymph Korkyra gave birth to. The Pegasus , the winged horse, son of Medusa , was also a son of Poseidon.

Poseidon fathered five pairs of twins with the mortal Kleito of Atlantis . The ten children of this connection were Atlas and Gadeiros (Eumelos in Greek), Ampheres and Euaimon , Mneseas and Autochthon , Elasippos and Mestor , Azaes and Diaprepes. He divided Atlantis among them and made them kings of Atlantis, with Atlas taking over the rule of Poseidon and thus becoming the first among them and king of the main island (this Atlas should not be confused with the Titan Atlas.)

With the earth goddess Gaia he became the father of Antaios . The wrestler Kerkyon is one of Poseidon's sons . He also loved the young Pelops and gave him a splendid team. Poseidon was the father of the brothers Otos and Ephialtes, the aloids , whose mother is Iphimedeia .

Neptune and Amphitrite, mosaic from Herculaneum

Athena and Poseidon fought for the protection of Attica. Kekrops I , the king of Attica, decided that both gods should make a gift to the people of Attica. The one who gives the better gift should gain dominion. The competition was held on the rock on which the Acropolis would later be built. Poseidon thrust his trident into the rock and made a spring gush (according to other sources a saltwater spring, or he gave the horse as a gift). Athena planted the first olive tree . Kekrops chose the gift of Athena, and the capital of Attica was named Athens . Out of anger, Poseidon condemned Kekrops for never being allowed to touch land again. Athena gave him immortality and with it the hope of someday coming down from his ship of damnation.

Because Poseidon and Apollon had insulted Zeus, Zeus ordered them to serve King Laomedon of Troy . He let them build walls around the city and promised the gods that they would be richly rewarded, a promise that he broke after the walls were completed. In anger, Poseidon sent a sea monster (or, according to other accounts, a lion). Hesione , the daughter of Laomedon (whom he had with Leucippe), was supposed to be sacrificed to him as a mercy , but Herakles saved her. He gave her to his companion Telamon as a wife.

In another legend he transformed the girl Kainis , who had given herself to him, into an invulnerable man at her request.

Poseidon is best known for his relentless hatred of Odysseus , especially since he blinded his son Polyphemus on his ten-year odyssey , as Homer reports. In addition, Odysseus had used the horse , sacred to Poseidon , to outsmart the Trojans.

In Plato's Atlantis - dialogues Poseidon is represented as a progenitor of the ruling family of Atlantis.

There is a short story by Franz Kafka called Poseidon from 1920.

In the youth book series Percy Jackson by the American Rick Riordan , Poseidon is the father of the young hero, who learns in the first part that he is a demigod. In the film adaptation Percy Jackson - Thieves in Olympus Poseidon is played by Kevin McKidd .